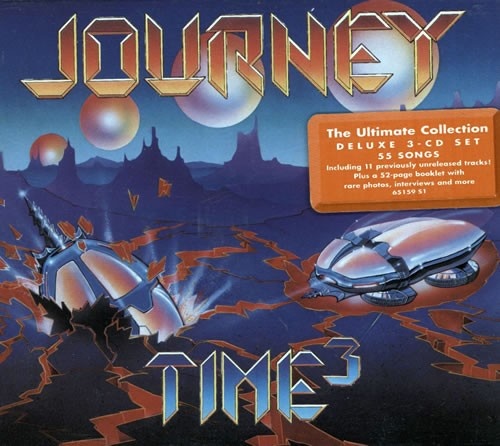 Journey has given radio some of AOR's finest three-minute gems, both in hard rock and ballad form. Time 3 strings together all their best songs, most of them popular and some not so well known, but all extremely enjoyable and laid out over the course of three discs. Set up chronologically, the first disc unleashes their raw sound, with the first eight songs being pre-Steve Perry. With tracks from Infinity, Evolution, and Departure rounding out disc one, a young Perry sets a musical precedent with his soaring voice. Even so, "Any Way You Want It" steals the show amidst all of their early material. Disc two is where this set truly shines, containing their biggest hits and covering the most entertaining and fruitful part of Journey's career. Seven of the songs here are from 1981's Escape album, including of course "Open Arms," "Don't Stop Believing," and "Who's Crying Now." The first half of the disc finishes off hits from the Departure album, and smoothly rolls into songs from the live Captured. The third disc starts off with the B-side "La Raza Del Sol," and follows with "Only Solutions" from the movie Tron. The best songs from Frontiers and Raised on Radio make up the next ten tracks, and finishes with wonderful live performances of "Girl Can't Help It" and "I'll Be Alright Without You." Time 3, which comes with a colorful booklet and informative liner notes about each song (released in this style when the set first hit shelves), is an extremely comprehensive overview. There is an overabundance of material here, but all of it is incredibly pleasing.