With the platinum triumph of Infinity still ringing in their ears like coins in a slot machine, Journey was now committed to completing their transformation from jazz fusion/prog rock mavens into arena rock superstars with their fifth album, 1979's Evolution. This transition (also clearly illustrated by the futuristic insect gracing each album cover henceforth) would not come without its growing pains, however, and while producer Roy Thomas Baker was back for a second go-round, original drummer Aynsley Dunbar would be the first casualty of the band's new direction. Thankfully, former Ronnie Montrose skin-beater Steve Smith soon brought his college-trained jazz fusion background to the table, and the band was ready to get back to work. If Infinity had defined a new songwriting formula for the act, Evolution only served to develop it and streamlined it further, clearly qualifying as their strongest effort to date and endearing the band to millions of FM rock listeners in the process. With commercial rock hits like "Lovin', Touchin', Squeezin'" (their first single to crack the Top 20), "Too Late" (which reached number 70), and the powerful "Just the Same Way" (which peaked at number 58) leading the way to radio dominance, Journey had never sounded stronger or more determined. And with Steve Perry's tenor pipes now clearly driving the band's engine, and guitarist Neal Schon beginning to relish in his guitar-hero persona, Journey could seemingly do no wrong. Evolution quickly became the band's biggest-selling album (moving over 800,000 units in less than three months), and Perry and co. soon embarked on yet another mammoth tour, which set many an attendance record, and set the stage for even greater triumph with 1980's Departure. 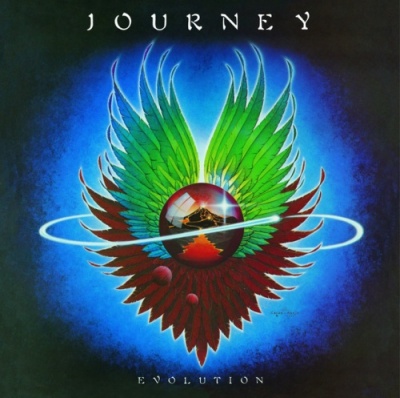