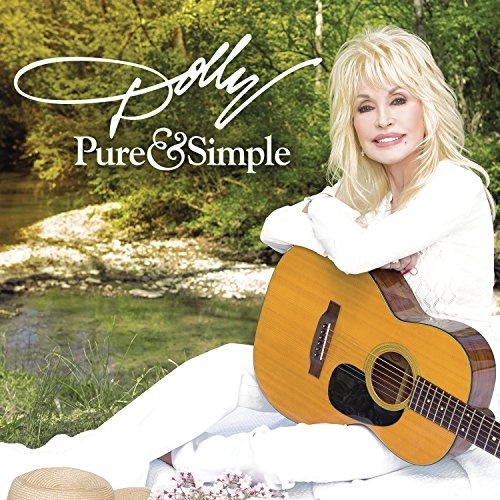 Dolly Parton may have spent a good portion of her career being treated as a novelty act, the sweet hillbilly girl with the big smile and the big hair, but it's clear she's had the last laugh. Very few country acts working today have approached Parton's career longevity, and at 70 years old she's still a force to be reckoned with. She doesn't have to play the summer state fair circuit, she hasn't had to re-record her back catalog, she's now acknowledged as a great singer and excellent songwriter, and as much as she likes to pretend she's a dumb blonde, she's a wealthy multi-media magnate who has played the game her own way and won. In 2016, Dolly Parton makes music in large part because it's good for her brand, but her album Pure & Simple is also the work of someone who still has fun writing and recording new stuff, and is still putting her heart and soul into her work. Parton co-produced Pure & Simple with Richard Dennison and Tom Rutledge, and she wrote and arranged all ten tracks, with songs about love dominating the set list. For someone who has been making records for over 50 years, Parton sounds remarkably good on these sessions; her voice is a bit weaker than it was in her glory days, but she can still hit her notes comfortably, and her gift for making her stories sound sincere and heartfelt is as strong as ever. When Parton sounds giddy about love in tunes like "I'm Sixteen" and "Head Over High Heels," her joy fills the room, and it's been some time since anyone has written a cheating song that takes the consequences of an illicit relationship as seriously as "Can't Be That Wrong." And Parton wisely sidesteps the sort of slick production that's the current norm in Nashville, opting instead for a clean, straightforward approach that serves the melodies and stays out of the way of her vocals. In many respects, this sounds like an album Parton could have made in the mid-'70s, before she made her bid to become a cross-genre superstar, and for fans who want to hear "the Real Dolly," Pure & Simple will hit the spot like a glass of iced tea on August afternoon.