The typical jazz fan may not realize that Dave Brubeck has accompanied a number of singers, because most of these recordings took place during his tenure with Columbia. This CD anthology has several tracks which were previously available only on the long out-of-print LP Summit Sessions; they include the impromptu concert collaboration between Tony Bennett and the Dave Brubeck Quartet during an invigorating "That Old Black Magic," and Peter, Paul & Mary join the pianist for "Because All Men Are Brothers" (whose music is adapted from J.S. Bach's "St. Matthew Passion"). Two additional numbers appear for the first time on this CD: a sterling performance by Carmen McRae of Brubeck's tricky "It's a Raggy Waltz," and the beautiful voice of Ranny Sinclair on Brubeck's lovely but infrequently heard ballad "Autumn in Our Town." The remaining tracks have all appeared on individual LPs or CDs. Louis Armstrong is heard in several tracks taken from The Real Ambassadors, including "Summer Song" (an overlooked masterpiece), and the humorous "They Say I Look Like God" (which Armstrong sang very seriously, which was not the composer's original intention), where is he is joined by Lambert, Hendricks & Ross. Carmen McRae's sassy interpretation of "Travelin' Blues" (a song any musician who's been on the road for an extended time will appreciate) and her playful rendition of "Take Five" are miniature gems. Jimmy Rushing swings like mad during the upbeat "There'll Be Some Changes Made" and has lots of fun with the loping treatment of "Ain't Misbehavin'." There are a lot of great musical moments throughout this recommended release. 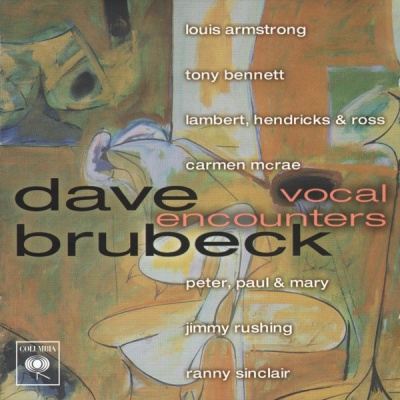