Gone with the Wind Review

This dynamic quartet, strongly influential during the cool jazz period, performed as a group from 1951 to 1967. Since the 1930s, leader Dave Brubeck received high praise and critical acclaim for his role as bandleader and for his stirring arrangements. At the piano, Brubeck plays along with the accompaniment of Paul Desmond, another timeless jazz legend in his own right. Joe Morello drives the rhythm of the group on drums and percussion with the help of Gene Wright, who shares his talent and pulsating beats on standup bass. Desmond is featured on this collection of standards, jamming along on the alto sax to tunes such as "Swanee River," "That Lonesome Road," and "Basin Street Blues." Brubeck shimmers with radiance and phenomenal craftiness in his piano improvisation at the end of "Georgia on My Mind." Morello gives it his creative all with a rich flair for rhythm during his strong solo performance on the tune "Short'nin' Bread." It is here that a superb call-and-response exchange between Morello's drums and Brubeck's piano is rendered. The song "Camptown Races" is featured here in two takes. Its mood and rhythmic power is intense and uplifting, pulling the listener into its dreamy percussive web. One can almost feel the crowd of thousands cheering a group of racehorses making their way around the turn to a photo finish.

The album as a whole is filled with wonderful surprises and contains some of the best that the cool jazz style has to offer. It is written in the record notes that the foursome believed this would be a special session from the very first take. The group played several of these tunes for the first time in the studio, working out the final product spontaneously. This recording is masterful in scope and very stimulating in style and detail. The percussion of Morello and the bass playing of Wright are quite colorful and filled with texture and majestic rhythmic quality. Desmond's lead on the alto sax is compelling and passionate, filled with joyous melodies that would be perfect for a romantic date. His ability to surf up, down, and through scale passages with a sense of effortlessness is certainly full proof as to why he is regarded with such high esteem within the entire spectrum of jazz. Dave Brubeck's proficiency resonates throughout the record as he shows off his classically trained ear. Brubeck is one of the few pianists who, during his day, clearly avoided standard bop melodic conceptions and rhythmic feeling, and played within a unique style very much his own. Gone With the Wind is strongly recommended not only for the seasoned jazz fan, but also for first-time listeners who wish to be thoroughly captivated. 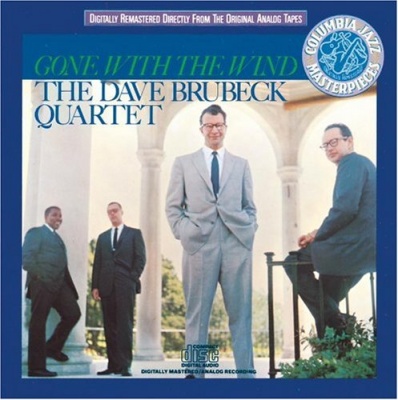 Gone with the Wind Album Information