For all those who have a big axe to grind with Brubeck, for all those who claim the band was only successful because they were predominantly white, or played pop-jazz, or catered to the exotica craze, or any of that, you are invited to have all of your preconceptions, tepid arguments, and false impressions hopelessly torn to shreds by one of the great live jazz albums of the 1960s. The Dave Brubeck Quartet at Carnegie Hall is a date that showcases the finest elements of the storied Brubeck Quartet, which featured, alongside Brubeck's piano, alto innovator Paul Desmond, bassist Eugene Wright, and Joe Morello on drums. On this February night in 1963 -- either the 21 or 22nd depending on which side of the cover you believe -- W.C. Handy's "St. Louis Blues" was given a knotty rhythmic workout it had never seen on Basin or Bourbon Street. Time signatures moved and shifted all over the tune for 12 minutes as Brubeck and Desmond exchanged cross-contrapuntal solos and melodic inventions back and forth. Movement, and plenty of it, was the identity this old nugget took on, with Brubeck taking Wright's cue and moving the blues into unheard-of harmonic spaces and intervals. At one point, with 16/4 time forcing itself onto the front line, Desmond makes his move quickly with one scalular interval to the top of the meter and stops. It's enough, he seems to be saying, that it gets brought back to a humane tempo before clamoring from a samba back into the blues before winding it out. And that's just for openers! The quartet move through all their hits and their new instincts gained from traveling abroad for the better part of six years. With cuts like "Bossa Nova U.S.A" and "Blue Rondo a la Turk," the quartet breathes new fire both melodically and tonally into its material, while other standards such as "Pennies from Heaven" were literally harmonically reinvented by the intense counterpoint, double and even triple, that went on between Desmond and Brubeck. And that's what this set is a reflection of: the Brubeck band would have loved to be recorded live every night they played. They hated the studio because there was nothing to compete against and no energy but their own to glean from. Check out "Eleven Four" and see where the audience in stuffy old Carnegie Hall is transformed into a hooting mob as Desmond solos his head off. When Brubeck pulls Ravel out of his back pocket and Wright accommodates him, setting a samba tempo for him to play against, the crowd may not know what they are hearing, but they flip just the same; they know something's happening and they're right there to experience his past harmonic indulgence mixed with the contrapuntal bop syntax from Desmond. It's no surprise that "Take Five" would take the set out, but given what has been played over two LPs, it's almost a comfort. There are fewer surprises here, it's true, but then, the tune's a groover anyway, and they grease it to the point of making it funky thanks to Wright's slapping at his bass in the middle section. This LP is perhaps the one essential Brubeck live album. While Take Five is rightfully a classic in that it changed everything, At Carnegie Hall reveals the band at the epitome of its musical -- harmonic, rhythmic, melodic, improvisational -- strength with near telepathic communication. It swings like a mother and offers an entirely new dimension to the definition of "melodic improvisation." 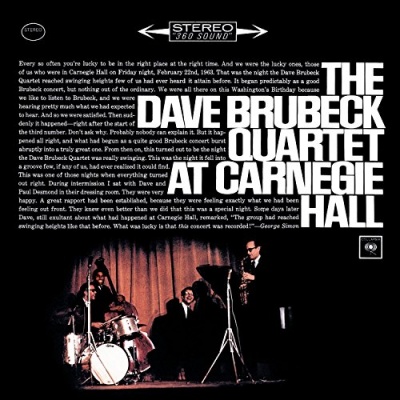 At the Office Comfort Dinner Ambiance In Love Relaxation