Between Here and Gone Review

Early in her career, songwriter Mary Chapin Carpenter was marketed as a country artist, but strangely, it took ten albums before she would record in Nashville. On her first recording of new material since Time* Sex* Love* in 2001, Carpenter surrounds herself with old friends and new faces. Carpenter co-produced the set with Matt Rollings and John Jennings, two musicians who have regularly appeared on her recordings over the years. Newcomers include fiddler Stuart Duncan, bassist Viktor Krauss, guitarist Dean Parks, Rob Ickes on Dobro, and vocalists Mac McAnally and Garrison Starr. Carpenter's musical palette is much wider than ever before; it is a record full of textures and shapes rather than musical frameworks for lyrics. While the songs are still the most important construct, the manner in which they emerge is far more expansive. And even though there is more steel guitar and fiddle here than on any of her previous recordings, and the record was done in Nash Vegas, it's about as far from a country record -- in the modern sense of that word -- as can be. Carpenter's cosmopolitanism is certainly a sound for its time.

The concerns experienced by the protagonists of her songs are those of everyday life at the dawn of a new century in the aftermath of September 11. That's not to say her melodies aren't timeless or that these songs do not transcend the present era (only time will reveal that to be true or false), but they tell the truth in a present tense we all recognize. There is an interesting fissure in these songs. As a body, they reflect transition and travel interior as well as actual byways, and impart the emotional sensibilities of being adrift, not in the present or in the past (though recollection of the previous is constant, if fleeting), while the future is still a blurry impression on the horizon. These songs are fissures; they exist in the gaps where real emotions are allowed to articulate themselves quietly and insistently before being blotted out by changes in circumstance and location as they appear like mirages, shimmer, and disappear. While there are standout tracks -- "Luna's Gone," "Goodnight America," "My Heaven," "Beautiful Racket," "Grand Central Station (the most devastatingly beautiful cut on the album), and "Elysium" -- the entire record holds together like a narrative mosaic; bits and pieces show up again and again, from song to song, without exact repetition.

Between Here and Gone will hopefully garner some singles and get radio play, but it's hardly that kind of outing. In fact, one has to wonder if radio is brave enough to deal with the complex yet nearly universal emotions Carpenter explores in these gorgeous songs. Musically, this is a sophisticated but very accessible recording, pleasant in its tempos and in its lush presentation. But there is no ear candy here, nothing to while away idle moments by; it is not a "dark" or "melancholy" record, but it is a serious one. Between Here and Gone quietly demands the listener's attention and dives deeply into a labyrinth of emotions before emerging as a validating, affirmative, and instructive experience; it is an album not only to experience, but to hold on to. That's a lot for a pop album to promise, let alone deliver, and Between Here and Gone is marvelous; it does both. 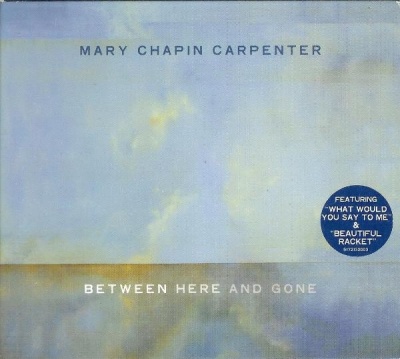 Between Here and Gone Album Information