A Place in the World Review

Mary Chapin Carpenter's heady star continued to rise with 1994's Stones in the Road, one of her most introspective collections, as searing in its way as Rosanne Cash's Interiors. In order to consolidate that success with her follow-up, A Place in the World, Carpenter returned to the looser, more rock-sounding Come on Come On for inspiration -- a record that netted seven hit singles. Carpenter and longtime bandmate and producer John Jennings hired studio aces like guitarist Duke Levine, keyboardist Benmont Tench, Fairport Convention drummer Dave Mattacks, bassist Bob Glaub, and a host of backing vocalists including Shawn Colvin and Kim Richey, as well as a small string section. This collection still touches on reflective adult folk, but returns to hooky, catchy, radio-friendly country-rock for balance. On the whole, A Place in the World doesn't offer the deep reflective rewards of Stones in the Road, nor is it quite as kinetic as Come on Come On. Still, the record is exceptionally well-crafted and boasts several excellent songs that reflect on the desire for romance and the willingness to risk virtually everything for it. There's the old-time soul feel of "Let Me into Your Heart" with its backing chorus, the bubblegum pop/rock of "I Want to Be Your Girlfriend," the poignant rocker "Hero in Your Hometown" -- which is a tracing-paper image for the way contemporary country singles sound in the 21st century -- and the anthemic country-rock of "Keeping the Faith." The title track that closes the record is one of several more poignant and introspective tunes, offering a look at the kind of changes Carpenter was going through in her personal and professional life. Any real fan will want to own this one as well as the aforementioned others, but those new to her music may want to seek out the earlier recordings first. 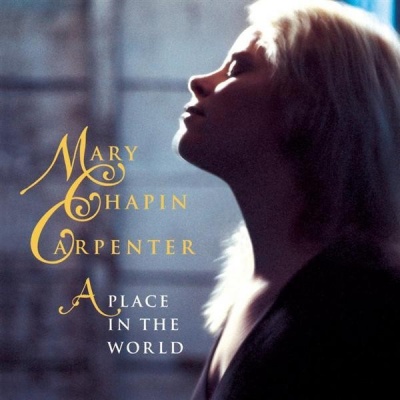 A Place in the World Album Information