Come on Come On Review

Come On Come On proved that even with two previous hit albums under her belt, Mary Chapin Carpenter was still as hot as could be. This album serves as one of the signposts that contemporary country would not only aspire to, but actually become in the 21st century. One need only to stack this slab up against 2006 recordings by Little Big Town and Sugarland to see the roots of Carpenter's blend of sophisticated pop, folk, and soft rock with country. This disc climbed all the way to number six on the country charts, yielding an astonishing seven hit singles, fully revealing Carpenter's meld of aesthetics, skill, and marketing savvy, and she established herself not only as one of her chosen genre's top artists, but crossed over into the then-burgeoning Americana and AAA radio formats as well. With friends such as Rosanne Cash, Joe Diffie, Shawn Colvin, and the Indigo Girls lending a hand, there's a full range of country, folk, and pop-styled songs strewn across the album, helping it and Carpenter herself gain enormous recognition from other audiences outside of country music. "He Thinks He'll Keep Her," a title keeping with country music's tradition of double entendres, became Carpenter's first number one hit, while the confident "I Feel Lucky" peaked at number four and netted her another Grammy. Lucinda Williams' "Passionate Kisses," with its beautiful guitar arrangements, also made it to number four, and Carpenter's vocal enthusiasm makes Dire Straits' "The Bug" one of the album's most spirited efforts. These songs, along with the title track's compelling folk essence, gave Come on Come On a well-rounded sound and exposed her talent for reaching slightly beyond the genre's long-established niches. Not only is Carpenter's music extendable, but her writing rescues country music from its familiar themes of "love 'em and leave 'em" conventionality while still managing to portray maturely the perils of romance and heartbreak from a female perspective. Carpenter repeated much of Come On Come On's full-ranged charm for 1994's Stones in the Road release, which garnered her yet a third Grammy in as many albums. 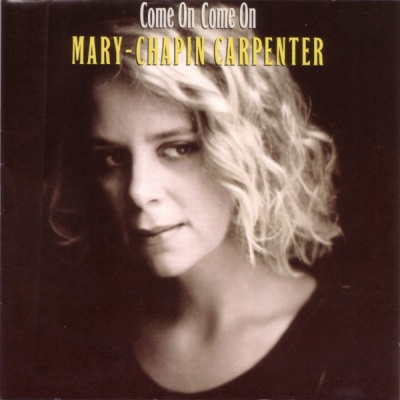 Come on Come On Album Information