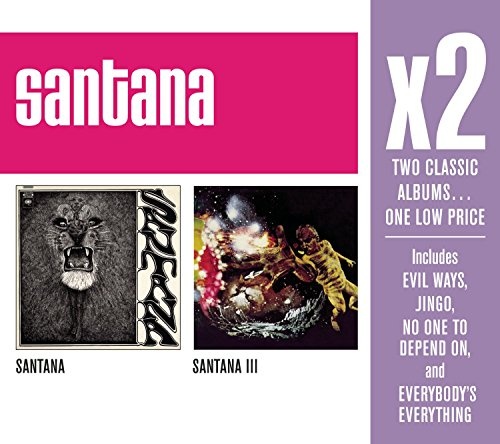 It's easy to argue with this pick of the first and third albums by Santana (entitled simply, Santana and Santana III) because it's painfully obvious why Abraxas -- the band's second offering -- was passed over: Regarded as the band's bona fide classic (it's only one of them from the early days) it's too big a seller in its own right to be budget-packed. OK, enough complaining. Both of these recordings are all killer no filler -- even the extra bonus cuts padding the end of Santana from the first recording of the album are worthwhile in that they show how the group was moving from being a jam oriented, Latin-flavored, blues-rock band to a song-oriented psychedelic one who spent more time accenting their Latin roots. Good move. The band's third record scored another bona fide hit single in Carlos' "Everything's Coming Our Way," that allowed Santana to play some acoustic guitar and nail the pop chart square in the head without giving up anything that gave the band its identity. Other notable cuts on this set were the José Chepitó Areas penned "Toussaint L'Overture," and Mike Carabello's "Nobody to Depend On."