A hopelessly misunderstood record in its time by Santana fans -- they were still reeling from the radical direction shift toward jazz on Caravanserai and praying it was an aberration -- it was greeted by Santana devotees with hostility, contrasted with kindness from major-league critics like Robert Palmer. To hear this recording in the context of not only Carlos Santana's development as a guitarist, but as the logical extension of the music of John Coltrane and Miles Davis influencing rock musicians -- McLaughlin, of course, was a former Davis sideman -- this extension makes perfect sense in the post-Sonic Youth, post-rock era. With the exception of Coltrane's "Naima" and McLaughlin's "Meditation," this album consists of merely three extended guitar jams played on the spiritual ecstasy tip -- both men were devotees of guru Shri Chinmoy at the time. The assembled band included members of Santana's band and the Mahavishnu Orchestra in Michael Shrieve, Billy Cobham, Doug Rauch, Armando Peraza, Jan Hammer (playing drums!), and Don Alias. But it is the presence of the revolutionary jazz organist Larry Young -- a colleague of McLaughlin's in Tony Williams' Lifetime band -- that makes the entire project gel. He stands as the great communicator harmonically between the two very different guitarists whose ideas contrasted enough to complement one another in the context of Young's aggressive approach to keep the entire proceeding in the air. In the acknowledgement section of Coltrane's "A Love Supreme," which opens the album, Young creates a channel between Santana's riotous, transcendent, melodic runs and McLaughlin's rapid-fire machine-gun riffing. Young' double-handed striated chord voicings offered enough for both men to chew on, leaving free-ranging territory for percussive effects to drive the tracks from underneath. Check "Let Us Go Into the House of the Lord," which was musically inspired by Bobby Womack's "Breezing" and dynamically foreshadowed by Pharoah Sanders' read of it, or the insanely knotty yet intervallically transcendent "The Life Divine," for the manner in which Young's organ actually speaks both languages simultaneously. Young is the person who makes the room for the deep spirituality inherent in these sessions to be grasped for what it is: the interplay of two men who were not merely paying tribute to Coltrane, but trying to take his ideas about going beyond the realm of Western music to communicate with the language of the heart as it united with the cosmos. After three decades, Love Devotion Surrender still sounds completely radical and stunningly, movingly beautiful. 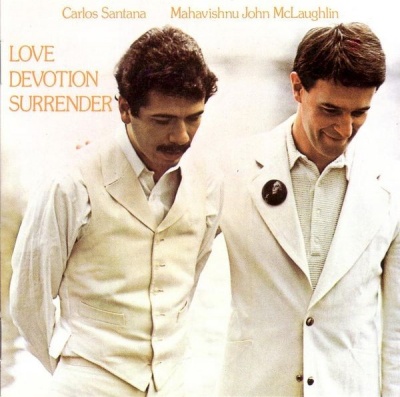