Buddy Guy's career and discography have been marked by inconsistency. Especially since his high-profile comeback in the early '90s, it seems he's been all too willing to turn over creative control on his albums, both for better and worse. Even just looking at the covers of those albums bears this out: 1991's Damn Right I've Got the Blues has him dressed in your basic '90s casual dress, but the next album has him wearing overalls! Anyone who saw Guy live any number of times before that album was released would realize that he never wore overalls. Then fast forward to the neo-psychedelic look of Heavy Love. The productions themselves have been similarly schizophrenic: big glossy guest star-laden albums to a heavy blues-rock sound to deep modal electric blues to acoustic albums. Well, this time out, drummer/session man Steve Jordan is in the producer's chair, and it seems that he wanted to give Guy a more contemporary sound. To that end, the songs are mostly lifted from the soul/R&B world: tracks written by Curtis Mayfield, Isaac Hayes, Otis Redding, and Steve Cropper. All the members of the assembled core band -- Jordan on drums, Danny Kortchmar on guitar, Willie Weeks on bass, and Bernie Worrell on keys (mostly Fender Rhodes) -- are solid players. There's a reason they've got probably thousands of credits between them, but the backing often comes off as professional rather than passionate. That can't be said of Guy, who always seems to bring plenty of passion to the proceedings, but for everything here that works, there's some kind of misstep. The Rhodes often adds a nice touch (as does the Optigan on "What Kind of Woman Is This"), but the slick backing vocals on "Now You're Gone" and "I've Got Dreams to Remember" really don't fit. Guest star du jour John Mayer adds nothing to "I've Got Dreams to Remember," and neo-soulster Anthony Hamilton pretty much takes over "Lay Lady Lay." Carlos Santana is producer for a thoroughly Santana-fied version of Screamin' Jay Hawkins' "I Put a Spell on You" (right down to the "Oye Como Va" keyboard lick) that might have fit on a Santana album but really doesn't fit here. Robert Randolph and Keith Richards' contributions fare better, with each fitting into the song nicely. "Somebody's Sleeping in My Bed" has some pretty hot guitar from Guy, but perhaps the album highlight is "Cut You Loose" because, well, he just cuts loose. Overall, Bring 'Em In is a mixed bag. Folks who liked Damn Right I've Got the Blues and Feels Like Rain will surely find a lot to like here. Guy's performances are solid, but the settings don't always suit him as well as they could. In fact, it almost seems like all the photos of Guy's "blues" jewelry are there to remind listeners that this is supposed to be a blues album. Won't somebody please get him in a recording situation where he can just be himself, with his working band? 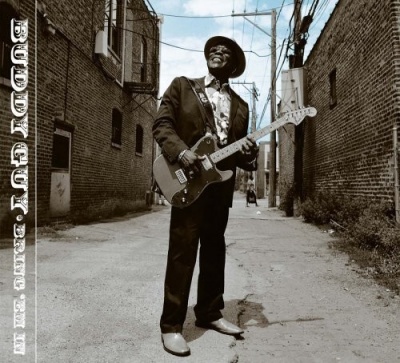