The Blues Is Alive and Well Review

Buddy Guy begins his 2018 album, The Blues Is Alive and Well, by singing "a few good years is all I need right now," an acknowledgment that at 81 years old he's closer to the end of his life than he is to the beginning. This isn't the first time he's made such an admission. Eight years earlier, he opened up Living Proof with a boast that he was "74 Years Young," so his advancing years have been on his mind for a while, but The Blues Is Alive and Well is full of songs charged with mortality. The record is bookended by "A Few Good Years" and the mellow boogie "End of the Line," and Guy muses about "Somebody Up There" and wonders what will happen "When My Day Comes," all the while acknowledging he's "Old Fashioned." That's a lot of songs about life and death, but The Blues Is Alive and Well has a lot of songs in general -- a full 15, lasting well over an hour. This excessive length means there's a lot of room for levity, too, including James Bay sitting in for a duet on "Blue No More," Mick Jagger's wailing harp on "You Did the Crime," and, best of all, a showdown with Keith Richards and Jeff Beck on "Cognac." Guy has some good moments on his own, of course -- his guitar stings throughout and he can sell the house rocker "Guilty as Charged" with a vigor that belies his age -- but the emphasis on ruminative tunes feels a bit heavy-handed. Maybe that's why the album ends with "Milking Muther for Ya," a minute-long dirty joke that punctuates the moody vibes of "End of the Line." Its very presence suggests that Buddy Guy would rather live it up while he still has a few good years left. 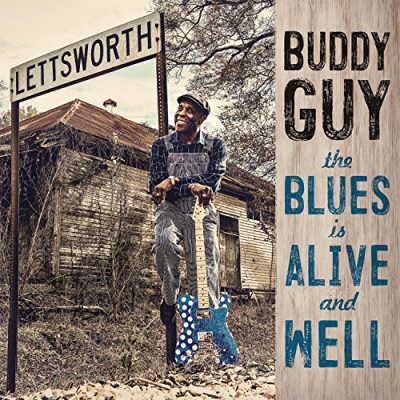 The Blues Is Alive and Well Album Information