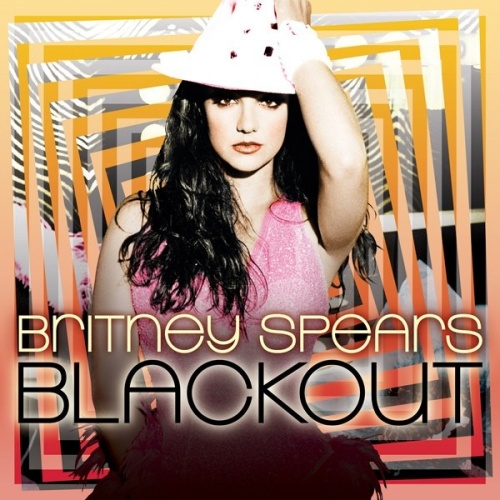 Public image is vital to pop stars, but few stars have been so inextricably tied to their image as Britney Spears. Think back to "...Baby One More Time" -- it has an indelible hook but what leaps to mind is not the sound of the single, but how Britney looked in the video as she pouted and preened in a schoolgirls' uniform, an image as iconic as Madonna's exposed navel. Every one of Britney's hits had an accompanying image, as she relied on her carefully sculpted sexpot-next-door persona as much as she did on her records, but what happens when the image turns sour, as it certainly did for Britney in the years following the release of In the Zone? When that album hit the stores in 2003, Britney had yet to marry, had yet to give birth, had yet to even meet professional layabout Kevin Federline -- she had yet to trash her girl-next-door fantasy by turning into white trash. Some blamed Federline for her rapid downward spiral, but she continued to descend after splitting with K-Fed in the fall of 2006, as each month brought a new tabloid sensation from Britney, a situation that became all the more alarming when contrasted to how tightly controlled her public image used to be. The shift in her persona came into sharp relief at the 2007 MTV Video Music Awards, as she sleepwalked through a disastrous lip-synch of her comeback single "Gimme More," a disaster by any measure, but when it was compared to such previous meticulously staged VMA appearances as her make-out with Madonna in 2003, it made Britney seem like a lost cause and fallen star.

All this toil and turmoil set the stage for her 2007 comeback Blackout to be a flat-out train wreck, which it decidedly is not -- but that doesn't mean it's a triumph, either. Blackout is an easy album to overpraise based on the lowered expectations Britney's behavior has set for her audience, as none of her antics suggested that she'd be able to deliver something coherent and entertaining, two things that Blackout is. As an album, it holds together better than any of her other records, echoing the sleek club-centric feel of In the Zone but it's heavier on hedonism than its predecessor, stripped of any ballads or sensitivity, and just reveling in dirty good times. So Blackout acts as a soundtrack for Britney's hazy, drunken days, reflecting the excess that's splashed all over the tabloids, but it has a coherence that the public Britney lacks. This may initially seem like an odd dissociation but, in a way, it makes sense: how responsible is Britney for her music, anyway? At the peak of her popularity, she never seemed to be dictating the direction of her music, so it only stands to reason that when her personal life has gotten too hectic, she's simply decided to let the professional producers create their tracks and then she'll just drop in the vocals at her convenience. Even the one song that plays like autobiography -- "Piece of Me," where she calls herself "Miss American dream since I was 17" and "I'm miss bad media karma/another day another drama," complaining "they stick all the pictures of my derriere in the magazines," as if she wasn't posing provocatively for Rolling Stone as soon as "Baby" broke big -- was outsourced to "Toxic" producer/writers Bloodshy & Avant, who try desperately to craft a defiant anthem for this tabloid fixture, as she couldn't be bothered to write one on her own. Instead, she busies herself with writing the album's two strip-club anthems, "Freakshow" and the brilliantly titled "Get Naked (I Got a Plan)" (surely the successor to such trash-classics as Soundmaster T's "2 Much Booty (In Da Pants)" and Samantha Fox's timeless pair of "Touch Me (I Want Your Body)" and "(Hurt Me! Hurt Me!) But the Pants Stay On"). Every piece of gossip in the four years separating In the Zone and Blackout suggests that her head is in the clubs, yet it's still a bit disarming to realize that this is all that she has to say.

Britney may not have much on her mind but at least she pockets so deep she can buy the best producers, hiring Bloodshy & Avant, the Clutch and the Neptunes, among others, to help craft an album that cribs from Rhianna's sleek, sexy Good Girl Gone Bad and the chilly robo-R&B of Justin Timberlake's FutureSex/LoveSounds. Emotionally, this isn't a progression from In the Zone, but it is a cannily contemporary dance album, sounding nearly as fresh as Rhianna and JT, even if it's hardly as trendsetting as either. Then again, Britney hasn't set the pace for the sound of dance-pop since her first two Max Martin-driven productions, and her skill -- conscious or not, it doesn't really matter -- has always been to get the right producers at the right moment, which she surely does here. Those producers turn Blackout into a sleek, shiny collection of 12 guiltily addictive dance tracks where the only weak link is Britney herself. Never the greatest vocalist, her thin squawk could be dismissed early in her career as an adolescent learning the ropes, but nearly a decade later her singing hasn't gotten any better, even if the studio tools to masquerade her weaknesses have. Strangely enough, the computer corrections either emphasize her irritating, strangled delivery -- nowhere more so than on "Piece of Me," where she's sharp, flattened, and clipped, the vocoder stabbing at the ears like a pick -- or she disappears into the track entirely, just another part of the electronic tapestry. Naturally, the latter cuts are more appealing, as they really show off the skills of the producers, particularly the Clutch's lead single "Gimme More," Bloodshy & Avant's relentless "Radar," the new wave shimmer of "Heaven on Earth," the stuttering electro-clip of "Break the Ice," or the spare, silly chant of "Hot as Ice." When Britney is pushed to the forefront, she garners too much attention, as she tries too hard to be sexy -- a move she could pull off before, when carefully controlled pictures of her in schoolgirl uniforms, cat suits, and tight jeans filled in the blanks her voice left behind. Now, those images are replaced by images of Britney beating cars up with umbrellas, wiping her greasy fingers on designer dresses, and nodding off on-stage, each new disaster stripping away any residual sexiness in her public image, so when she tries to purr and tease on Blackout she repels instead of seduces. That's the new Britney, and as she's always been an artist who relies on image, her tarnished persona does taint the ultimate effect of her music, as knowledge of her ceaseless partying turns these anthems a bit weary and sad. But if you block that image out -- always hard to do with Britney, but easier to do here since the tracks sound so good -- Blackout is state-of-the-art dance-pop, a testament to skills of the producers and perhaps even Britney being somehow cognizant enough to realize she should hire the best, even if she's not at her best.