In the Zone Review

If 2001's Britney was a transitional album, capturing Spears at the point when she wasn't a girl and not yet a woman, its 2003 follow-up, In the Zone, is where she has finally completed that journey and turned into Britney, the Adult Woman. Like her peer Christina Aguilera, Britney equates maturity with transparent sexuality and the pounding sounds of nightclubs, but since she's not as dirrty as Xtina, her spin is a little different. Where Christina comes across like a natural-born skank, Britney is the girl next door cutting loose at college, drinking and smoking and dancing and sexing just a little too recklessly, since this is the first time she can indulge herself. And that's what In the Zone is -- Britney indulging herself, desperate to prove that she's an adult. Since she's a pop diva, the record label certainly set some limits -- and, really, given her track record and taste, there was little chance that she would follow Pink's lead and write an album with a punk rocker and then draft Peaches for a cameo -- but she has been freed from her musical parent, Max Martin, who is absent for the first time from a Britney Spears album. She's chosen to play the field and work with a bunch of different collaborators, including Madonna, Moby, the Matrix, Trixster, Roy "Royality" Hamilton, Bloodshy & Avant, and R. Kelly. This laundry list of producers and co-writers reveals a combination of savvy and stupidity, reminiscent of the good ideas and bad judgment a young adult goes through in the throes of adjusting to maturity, but one thing ties it all together: her yearning to prove that she's a mature adult. Since the songs are almost exclusively about sex or dancing, with an empowerment tune and a couple of heartbreak ballads tossed in for good measure, it's a pretty limited definition of adulthood, which would be fine if Spears didn't treat it all so seriously, as if maturity were only about sex and dancing. Since she's so determined to be a woman, not a girl, she has completely shed the sugarcoated big hooks and sappy love songs that drove her stardom, concentrating on music that glides by on mellow grooves or hits hard with its hip-hop beats. It's all club-ready, but despite some hints of neo-electro and the Neptunes, it doesn't quite sound modern -- it sounds like cuts from 1993 or Madonna's Bedtime Stories and Ray of Light. Madonna, of course, duets on the album's first single, "Me Against the Music," whose title practically begs to be mocked. Unfortunately, any snarky jokes directed at the song are warranted, since it's the worst single either Britney or Madonna had yet released, a songless mess of staccato beats whose chorus weirdly recalls Oasis' "D'You Know What I Mean." Neither singer has much range, yet they usually exploit their weakness well; here, they succumb to their limitations to the point that their thin voices are indistinguishable apart from Madonna singing "Hey Britney" ad nauseam. This is not the only time on In the Zone that the music is hampered by Britney's limited vocal abilities. She may be older now, but she still sounds like a little girl, which undercuts both the glistening, sensual mid-tempo grooves that dominate the album and the big, booming up-tempo cuts that offer a change of pace. Production-wise, these tracks are not only accomplished but much more varied than any of her previous albums -- in particular, Moby's "Early Mornin'" has a sleek feel, Mark Taylor's "Breathe on Me" is alluring, and the Bloodshy & Avant productions "Showdown" and "Toxic" are irresistible ear candy -- but Britney's voice just isn't sexy enough to sell these songs; she often sounds like a girl dressing up in her big sister's clothes, whether she's murmuring seductive or delving into rap and ragga. All of this undercuts not just the songs, but the theme of the album, since it seems that she's still not yet a woman, no matter how much she protests that she is. While there are surely some good moments here and while this is surely her most ambitious, adventurous album to date, it's not a particularly successful one, since she treats her freedom as a burden, not a blessing. After all, if an album is going to be about sex, dancing, and freedom, it should at the very least sound joyous and fun. In the Zone deliberately avoids fun, which is why it's less likeable than Britney's previous albums, even if it is musically more accomplished. 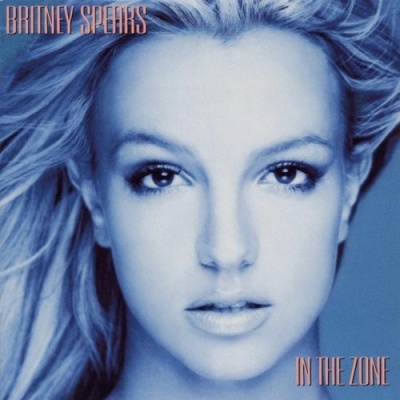 In the Zone Album Information