The title says it all -- that this third album is where it's all about Britney. Actually, the titles say it all: Britney is "Overprotected," she pleads "I'm Not a Girl, Not Yet a Woman," tries to let us all see "What It's Like to Be Me." All three songs are pivotal moments on Britney Spears' third album, the record where she strives to deepen her persona (not the same thing as her character, of course), making it more adult while still recognizably Britney. That much was evident from the selection of the first single, "I'm a Slave 4 U," a sultry Neptunes-produced salute to Prince that is so far removed from the big, glitzy Max Martin productions that are her signature that at first it sounds awkward, even wrong. As it grows, it sounds like one of her best singles -- a skittering, spare funk number that is a perfect next move for her teasing, unformed sexiness. Such a departure seems to signal a full album of surprises like that, especially when teamed with the aforementioned title, but Britney isn't that bold -- after it opens with the Neptunes' retro-future funk, it delves right back into Martin territory with "Overprotected." At first, that's a disappointment, but then the small, yet significant, changes become apparent. Rhythmically and melodically, the whole album is sharper, tougher than what came before. What used to be unabashedly frothy has some disco grit, underpinned by Spears' spunky self-determination that helps sell hooks that are already catchier, by and large, than those that populated her previous two albums. While there's no denying that this reinvention and statement of dogged individuality is no doubt a calculated move (and a brilliant, timely one at that), there's no denying that it's effective, in large part because Spears is committed to making this record work. She's co-written more songs than ever before, and these are strong selections, whether it's the hard-edged "Lonely," the sweet "That's Where You Take Me," or, especially, the neo-disco "Anticipating," one of the pure delights on this record. These are small steps forward -- really, the most overt steps forward are the collaborations with the Neptunes on "Slave" and "Boys," which are the sexiest sounding cuts she ever did -- but most of the Martin productions sound fuller (particularly the Dido-written ballad "I'm Not a Girl"), and Rodney Jerkins offers some welcome rhythmic invention on many of his contributions. This isn't a perfect record -- Martin stumbles on "Bombastic Love," Jerkins drops the ball on "I Love Rock N Roll" (this year's entry of the now obligatory cringe-inducing classic rock by Ms. Spears) -- but it does sound like the work of a star who has now found and refined her voice, resulting in her best record yet (and rivaling Mandy Moore's eponymous album as the best teen-pop record yet released). It's enough of a reinvention to suggest that Britney will know what to do when the teen-pop phenomenon of 1999-2001 passes for good. 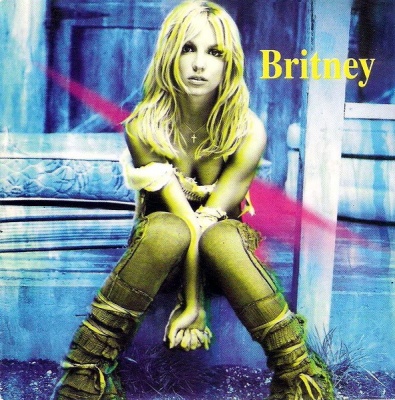