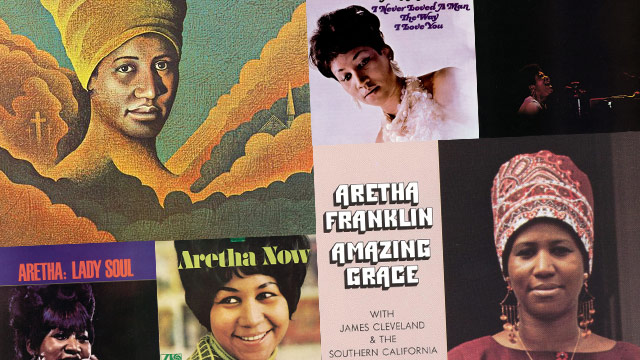 In 1965, Otis Redding wrote and recorded the song "Respect," which became one of his biggest hits, reaching the Top 5 of the R&B charts and crossing over to the Pop Top 40. Two years later, Aretha Franklin released her version of Redding's song, and after he heard it for the first time, Otis said, "I just lost my song. That girl took it away from me." Redding was hardly alone in that. Aretha Franklin didn't write "(You Make Me Feel Like) A Natural Woman," "Chain of Fools," "I Never Loved a Man (The Way I Love You)," "Baby I Love You," or "The Weight," either, but once she recorded them, those songs were hers. It wasn't just that Aretha outsang the folks who originally recorded those tunes, though she could and often did do that -- she also put a part of herself into them that no one could take from her. When Otis Redding sang "Respect," it was the story of a man who wanted his woman to treat him right after a long, hard day. In Aretha's hands, it became something larger, a demand that she be given her due both as a woman and as a person of color. In the year that the Black Panther Party for Self Defense began making headlines and race riots tore through through many major American cities, Franklin's version of "Respect" became a rallying cry, not just another R&B hit but a demand from the larger culture that she and her brothers and sisters were owed much more than they received.

Aretha Franklin, who died after a long battle with pancreatic cancer on Thursday, was one of the true icons of soul music, an artist whose superb command of her instrument and the unforced but passionate impact of her vocals at once defined the genre and transcended it. Franklin grew up in the Baptist church, and gospel music was a cornerstone of her musical approach. Franklin never truly walked away from it, periodically recording spiritual material throughout her career, and the echoes of the hymns she recorded in her teens were clearly audible in her most celebrated work. Franklin's best work was also steeped in the traditions of Southern soul, which was a bit more of a surprise. She grew up in Detroit, and didn't truly embrace that sound until she struck a deal with Atlantic Records in 1967 and went to Muscle Shoals, Alabama, then a major center in R&B recording, to cut her first tracks for the label with producer Jerry Wexler at the controls. While the sessions would prove contentious and she would never record in Muscle Shoals again, with "I Never Loved a Man (The Way I Love You)" and "Do Right Woman, Do Right Man," Franklin cracked the code of a sound that had previously eluded her, finding a musical environment where she truly seemed at home, and from that point on, she was an unstoppable force.

Aretha Franklin was born on March 25, 1942, and like many soul music greats, her musical roots were in gospel, with her connection to the music running deeper than most. Her father was the Reverend C.L. Franklin, pastor of the New Bethel Baptist Church in Detroit and one of the best known African-American evangelists of his day. In addition to preaching at his own church, Rev. Franklin traveled across the country, earning hefty honorariums for speaking on the gospel and recording a successful series of albums that documented his powerful oratory and what was described as his "million dollar voice." Rev. Franklin was very much a celebrity in the African-American community in the 50s, and through him young Aretha met the likes of Sam Cooke, Jackie Wilson, James Cleveland and Clara Ward. Emboldened by her experiences, Aretha, who was notoriously shy among family and friends, began singing, and her father quickly recognized that she had an exceptional talent. Aretha was only 10 when she began singing solos in her father's church, and at 14 she was performing alongside her dad on the road. That same year, she recorded several sides for a small gospel label, and a successful career as a spiritual artist seemed assured.

However, Aretha had greater ambitions than that. Having known Sam Cooke, she had seen him go from a member of the Soul Stirrers to a secular star who conquered the pop and R&B charts, and she wanted a similar chance to grab the brass ring. At 18, with her father's blessings, she cut a demo tape of pop material, and soon she was fielding offers from RCA (at the behest of Sam Cooke, an RCA artist) and the fledgling Motown label. But John Hammond, the legendary Columbia Records A&R man who had previously discovered Billie Holiday, Count Basie, and Lionel Hampton (and would later sign Bob Dylan, Leonard Cohen, and Bruce Springsteen), was knocked out by Aretha's voice and signed her to the label in 1960, declaring she had talent on a par with Holiday. Fans are strongly divided on the merits of Franklin's recordings for Columbia, and while they were of the the most successful and prestigious labels in the world in 1960, they weren't a great fit for Aretha. Notoriously late to the game in signing rock and R&B acts, Columbia sought to groom Aretha into an entertainer who would wow nightclub audiences, rather than young or black listeners. Aretha did cut some fine sides for Columbia, and scored three R&B Top Ten hits between 1960 and 1961 (and even cracked the lower reaches of the Top 40 with "Rock-a-Bye Your Baby With a Dixie Melody"), but when she and Columbia amicably parted ways at the end of 1966, some questioned Atlantic's judgment in signing an act who had seemingly failed to live up to expectations.

By the end of 1967, those thoughts had been brushed aside, as Franklin put five singles in the Top Ten that year, four of which went gold. Franklin was now one of the most successful and talked-about artists in popular music, and as the '60s gave way to the '70s, she proved herself to be a versatile talent, able to bend her glorious voice to anything from soulful interpretations of Beatles tunes ("Eleanor Rigby") to the proto-funk of "Rock Steady." She also scored a critical, commercial, and personal triumph with 1972's Amazing Grace, a live album in which she delivered a program of gospel classics. However, 1973's "Until You Come Back To Me (That's What I'm Gonna Do)" would prove to be her last Top Ten hit of the decade, and while she remained a potent live draw and one of soul's peerless artists, like many R&B stars of the '60s she seemed to be fading from the spotlight as funk and disco came to dominate African-American music.

Once again, a change in labels helped change that. In 1980, Franklin signed with Arista Records, and the label helped give her music a makeover, still putting her voice front and center but adding a more contemporary spin in the production and arrangements. Aretha also got some unexpected help from John Belushi and Dan Aykroyd; the comedians cast her in their 1980 film The Blues Brothers, playing a no-nonsense waitress married to fry cook and guitarist Matt "Guitar" Murphy. The role wasn't much, but Franklin all but stole the movie with her sassy, brooking-no-jive performance and her energetic delivery of a new version of "Think." Critics cited her performance as one of the highlights of The Blues Brothers, and it's surprising she never landed another acting role. (Perhaps she wasn't interested.)

With the movie putting Franklin back on the pop culture radar, in 1982 she went into the studio with top-selling soul belter Luther Vandross, who co-produced the album Jump To It and helped write four of its songs. The album went gold, and she fared even better with 1985's Who's Zoomin' Who, produced by Narada Michael Walden. Walden give the album a sleek pop sheen and a radio friendly sound, and combined with Franklin's powerhouse vocals, the album went platinum and produced three major hit singles -- "Freeway of Love," "Sisters are Doin' It For Themselves," and the title cut. Arista prexy Clive Davis was a strong believer in using cameo appearances from current pop stars to boost the visibility of veteran acts, and "Sisters Are Doin' It For Themselves" found Aretha trading verses with Annie Lennox of the Eurythmics. This would become a common feature on Franklin's albums of the '80s and '90s, as she found herself paired up with George Michael ("I Knew You Were Waiting (For Me)"), Whitney Houston ("It Isn't, It Wasn't, It Ain't Never Gonna Be"), Elton John ("Through the Storm"), and Lauryn Hill ("A Rose is Still a Rose"), among others. However, Franklin never played second fiddle to her guest stars, singing with her usual authority and confidence, and it often seemed she was doing them the favor, not the other way around. Aretha also used her renewed success to persuade Arista to let her cut another live gospel set, 1987's One Lord, One Faith, One Baptism.

Franklin's tenure with Arista came to an end with 2007's Jewels in the Crown: All Star Duets With the Queen, and while she continued to perform and record in the last decade of her life -- making memorable appearances at Barack Obama's 2009 inauguration and a Thanksgiving Day Detroit Lions game in 2016 -- rumors of poor health began to circulate. Franklin and her representatives usually refused to share details about her condition, but she regularly cancelled concert bookings due to medical issues in her last years, and had publicly acknowledged her struggles with alcohol, smoking, and obesity. (She had already stopped performing outside of North America in 1984 after developing a strong fear of flying.) It wasn't until Franklin went into hospice care in mid-August 2018 that it was confirmed she was living with pancreatic cancer, which claimed her on August 16.

While American music has lost one of its greatest stars and most memorable talents with the passing of Aretha Franklin, we've also lost something more than that. Franklin was a singular artist, but she also represented something unique, bringing together several threads of African-American musical tradition into a style that was all her own. And while more than a few singers can mimic the effects of her tremendous vocal range, practically none of them could match the emotional depth of her best work, and her ability to make a song her own regardless of its context. And her contribution as a cultural force and a symbol of strength and independence cannot be underestimated. Aretha Franklin was the Queen of Soul, but more importantly, she was a voice who deserved and demanded respect … and she got it.