Jewels in the Crown: All Star Duets with the Queen Review

There are duet records, and then there is recording "Jumpin' Jack Flash" with Keith Richards. A 16-track compilation of Aretha Franklin's duets from the '80s and '90s, Jewels in the Crown: All-Star Duets with the Queen benefits from the high-profile partners that the Queen of Soul has been able to hook over the years (plus a trio of new tracks featuring sympathetic partners: John Legend, Mary J. Blige, and Fantasia). Spanning her Arista years, the collection runs the gamut of studio techniques from the '80s to the 2000s. Six songs come from the '80s, including the Keith Richards feature, which is a little too pristine to suit a version of "Jumpin' Jack Flash." Others from the same era sound better, such as "Sisters Are Doin' It for Themselves" with Eurythmics (which benefits from David Stewart's digital studio knowledge), and Franklin's hit duet with George Michael on "I Knew You Were Waiting (For Me)." The '90s duets are also mixed, including a lackluster pairing with Frank Sinatra on "What Now My Love" (from the original Duets album), but also an energetic live performance of "Chain of Fools" with Mariah Carey that works much better than could be expected. Of the new tracks, John Legend's "What Y'All Came to Do" is the best, an upfront and testifying jam with deft vocal freestyles from Legend and Franklin. 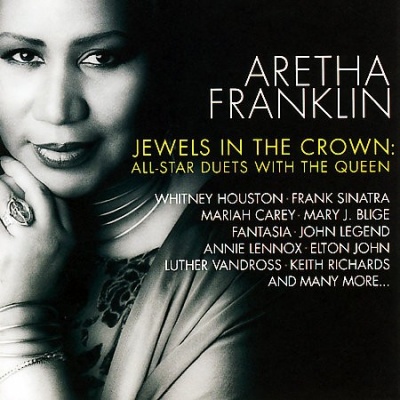 Jewels in the Crown: All Star Duets with the Queen Album Information