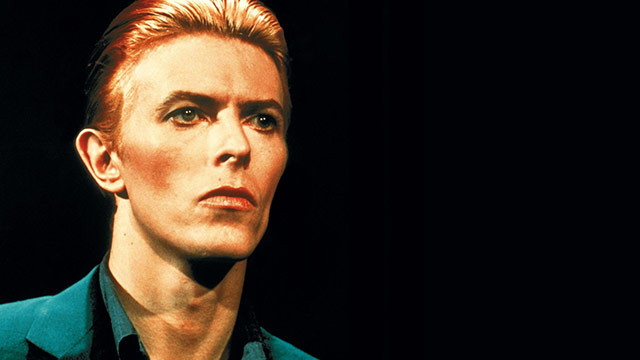 Just two days after releasing his twenty-fifth album, Blackstar, David Bowie departed this earth. His passing carries a fittingly dramatic flair: it's as if he orchestrated his death, timing it so it arrived when he seemed still in the thick of life, not at the end of it.

According to his longtime friend and collaborator Tony Visconti, Bowie knew he had cancer for a while--the singer revealed his illness to the producer a year ago, as they worked on Blackstar, the pair aware that this album would be greeted as a comeback but would later come to be seen a testament, a conclusion to a career that seemed designed to evade an easy summary. Many years ago, calling David Bowie a chameleon seemed insufferably hackneyed, but like all cliches, there's certainly a germ of truth at its core. Bowie himself courted the comparison, calling his first hits compilation Changesonebowie, its title not only acknowledging his transitions, but teasing more to come.

Chagesonebowie arrived in 1976, not three years after Bowie laid Ziggy Stardust to rest and a year prior to his Berlin trilogy. Enough time had elapsed so a narrative could be constructed around his hits, but it was still early in his career. Forty years of reinvention lay ahead, but he also already had over a decade of recordings behind him, stumbling through Stonesy blues with the King Bees and Manish Boys before beginning to right himself at the dawn of the age of mod. It's no coincidence that Bowie began to find his groove when art-pop surfaced in the mid-'60s, but it would take him a while before he fully absorbed the lessons of Pete Townshend, Ray Davies and Syd Barrett. Before that, he found a bit of a lift by copping a few moves from Anthony Newley, the English song-and-dance man whose influence can be heard through 1967's David Bowie album, and reaches something of an apex on "The Laughing Gnome," a Top Ten novelty in the UK a full five years before he reached stardom with "Starman."

Those early years are often dismissed as a footnote, an awkward adolescence for an artist who would never seem unsure of himself again (not even when he perhaps should've questioned his intent), but even these formative recordings showcase instincts that would serve him well: he openly stole from his inspirations while he also possessed a gift for show. He intuited innovation and turned it into theater, his hybrids often ushering the underground into the mainstream. Perhaps Marc Bolan was the first alien to play glam, and certainly Kraftwerk honed the teutonic rhythms of Krautrock prior to Low, but to generations of listeners, it seemed as if David Bowie invented these styles outright. Such was the power of his sound and vision: even when his antecedents were apparent, Bowie made music that felt startlingly original and entirely personal.

"Personal" is a loaded term, suggesting an artist who spills their heart all over the page. Bowie cherished evasions, so much so that it's easy to miss all the portents of death littered throughout Blackstar. Such coded confessions are apparent throughout Bowie's catalog--turn to Chris O'Leary's blog Pushing Ahead Of The Dame or, better still, his book Rebel Rebel for close readings--but his work gives the lie to the idea that artifice contains no soul. No matter how sculpted his records or calculating his moves, emotion coursed through Bowie's art: he revealed himself through his spectacles and cryptic turns of phase, usually married to music that hit the gut, heart and loins as hard as it did the head.

Along with his embrace of high art, Bowie's reputation as a shape-shifter tends to obscure the immediacy of his music, but even his furthest explorations were grounded by his devotion to pop song form and live bands. The fractured experimentations of Low and "Heroes" reverberated because they were trimmed of fat and delivered by a band that found funk within icy alienation. Another key to understanding Bowie is not only did he tip his hat to his inspirations--even when he was a superstar, he found time to cover Scott Walker, Morrissey and the Pixies--but he embraced the possibilities of collaboration. This is why he thrived as a record producer in the early '70s, when he saved Lou Reed and Iggy Pop from imminent self-destruction and gave Mott The Hoople an actual career, and it's also why his albums each had a distinctive feel from the next. He had a knack for spotting guitarists--Mick Ronson, the glam god who powered the Spiders From Mars; the sly funk of Carlos Alomar; the art renegades Robert Fripp and Adrian Belew; the gonzo blues of Stevie Ray Vaughan--and he placed them into settings where they couldn't rely on their trickbag. He pushed himself like he pushed his band, teaming up with Brian Eno or Nile Rodgers so he could free himself of what he was and discover new territory.

Bowie pulled this trick off once more with Blackstar, enlisting saxophonist Donny McCaslin and other New York City-based jazz musicians to help bring the album to life alongside Tony Visconti, the producer who first worked with the singer back in 1970 for The Man Who Sold The World, the loudest and heaviest rock the singer ever made. Visconti wasn't there for the Spiders From Mars--The Rise & Fall Of Ziggy Stardust & The Spiders From Mars, Aladdin Sane and Pin Ups, along with Hunky Dory, were all produced by Ken Scott, giving them a slightly distinct hue from the rest of David's 70s records--nor did he contribute to the chilly Station To Station, but he helmed Young Americans, the Berlin trilogy of Low, "Heroes" and Lodger, plus 1980's Scary Monsters (And Super Creeps), an album that is as good as anything Bowie ever did.

The Next Day and Blackstar, the 2010s albums that function as Bowie's farewell, weren't the first reunion for Visconti and the singer. The producer returned to the fold in 2002 for Heathen and 2003's Reality, a pair of nicely-rendered records that for the longest time seemed to be the quiet close to a tumultuous career: not his riskiest material but a nice coda to a '90s where Bowie's experiments were as likely to flail as fly. Truthfully, Bowie didn't deal with the aftershocks of the mega success of 1983's Let's Dance with exceptional grace: despite the cracking "Blue Jean," 1984's Tonight is a mess and 1987's Never Let Me Down isn't much better, a clanking soundtrack to all the excesses of the Reagan era. Tin Machine, his collaboration between the guitarist Reeves Gabrels and the Sales Brothers, still functions as a punchline, but it's where he began to right himself, attempting to ride the gnarled noise of Sonic Youth and the Pixies.

Black Tie White Noise (1993) provided another about face, as Bowie reunited with Nile Rodgers to explore new jack swing and play saxophone alongside trumpeter Lester Bowie. As Annie Zaleski noted in her review for Brooklyn Magazine, this is the album that seems like the clearest antecedent to Blackstar, but before he arrived to that place, Bowie had to go through the dark, cloistered Outside--a long-awaited 1995 reunion with Eno that remains challenging--and the drum'n'bass explorations of 1997's Earthling, the last two records he made where it seemed like he was actively trying to open up new territory.

After Earthling, Bowie began revisiting his past, settling down for the elegant chill of 1999's "hours…" a record that set the table for the classicist albums Heathen and Reality. If Bowie exited with these two albums, they would've functioned as a respectable coda but instead he had a final surprise: a secretive farewell performed in plain sight, two albums that filtered his pop past through an art-rock records, a pair of albums that will undoubtedly grow in stature now that they're known to be the last new music David Bowie completed. He didn't need to have The Next Day or Blackstar to secure his legacy but their unexpected appearance provide an apt final act for an artist who thrived upon the grand gesture. Before he left us, he reminded us just how much poorer we will be without him here.