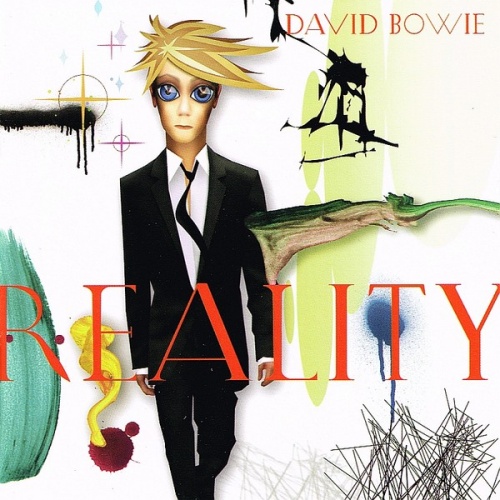 Instead of being a one-off comeback, 2002's Heathen turned out to be where David Bowie settled into a nice groove for his latter-day career, if 2003's Reality is any indication. Working once again with producer Tony Visconti, Bowie again returns to a sound from the past, yet tweaks it enough to make it seem modern, not retro. Last time around, he concentrated on his early-'70s sound, creating an amalgam of Hunky Dory through Heroes. With Reality, he picks up where he left off, choosing to revise the sound of Heroes through Scary Monsters, with the latter functioning as a sonic blueprint for the album. Basically, Reality is a well-adjusted Scary Monsters, minus the paranoia and despair -- and if those two ingredients were key to the feeling and effect of that album, it's a credit to Bowie that he's found a way to retain the sound and approach of that record, but turn it bright and cheerful and keep it interesting. Since part of the appeal of Monsters is the creeping sense of unease and its icy detachment, it would seem that a warmer, mature variation on that would not be successful, but Bowie and Visconti are sharp record-makers, retaining what works -- layers of voices and guitars, sleek keyboards, coolly propulsive rhythms -- and tying them to another strong set of songs. Like Heathen, the songs deliberately recall classic Bowie by being both tuneful and adventurous, both hallmarks of his '70s work. If this isn't as indelible as anything he cut during that decade, that's merely the fate of mature work by veteran rockers. So, Reality doesn't have the shock of the new, but it does offer some surprises, chief among them the inventive, assured production and memorable songs. It's a little artier than Heathen, but similar in its feel and just as satisfying. Both records are testaments to the fact that veteran rockers can make satisfyingly classicist records without resulting in nostalgia or getting too comfortable. With any luck, Bowie will retain this level of quality for a long time to come.