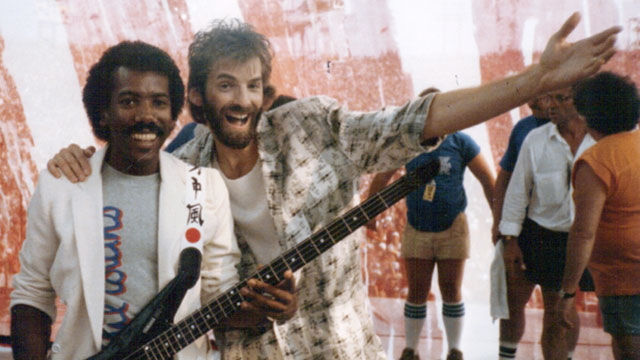 Last time we talked to bassist Nathan East about his experience in the wild world of Daft Punk, which included his playing on the smash hit "Get Lucky" and a star-studded Grammy performance. This time we went deeper into the past to dig into East's time with eighties hitmaker and movie theme icon Kenny Loggins, for which he had to turn down a massive job, but included the Number One, Oscar-nominated track "Footloose," and the performance at Live Aid that earned him his next huge gig.

AllMusic: Before we get into "Footloose," what have you been working on since we last talked?

Nathan East: I was in Seoul promoting my record, and that went really well. The Korean audiences were young, vibrant and energetic, it was amazing. I went from there to Japan with Fourplay, we had a good run, and I went to Moscow, Denmark, Germany and the UK to do some bass clinics, so it was pretty extensive travel. We just got back from the Bay Area with Fourplay, and we’re starting our 25th anniversary album.

Also, I just played with Steven Tyler up in Canada. It was amazing, it was for the David Foster Foundation charity gala that he does every year, this one was in Calgary. Jennifer Hudson and Babyface were there, too, they participated in the show, but Tyler was my fave. We were the house band, so all those songs that we usually jam around on, like “Walk This Way,” we got to play with him, it was huge fun. That afternoon we determined the songs we’d play and we ran through them, but those songs are just in your psyche, so shame on you if you don’t know them. We had his stuff down. He had a good time, and it must be interesting to play with people who aren't Aerosmith.

AllMusic: You've worked with Phil Collins for decades, and there were rumors recently of him possibly doing some shows, would you be involved with that?

East: I think he tried to do a couple of rehearsals to test the waters, and at the moment I think there’s one charity event, but I don’t think that, on a full scale, he’s ready to get back in there.

AllMusic: Do you have to rehearse for his shows?

East: If he calls, I can show up and be ready to make the move. I got those locked down.

AllMusic: On to "Footloose." How did you start playing with Kenny Loggins?

East: It came abruptly in the early eighties when his bass player was either sick or had to leave suddenly, and I got a call from the road saying, “Can you get out here as soon as possible, we have some shows to do,” so I jumped out there on short notice and started doing some touring with him, which led to recording a few albums with him, one of which was the Footloose soundtrack.

AllMusic: What were you doing at the time?

East: I’ll never forget that the day I left to go tour with Kenny Loggins, I had just received my first call from Quincy Jones to play on a Michael Jackson album he was doing, Thriller, and I couldn't record the Thriller album. Around that time, I was starting to get the session career going, so I was working with Julio Iglesias, Whitney Houston and all these people who were going around then. Fortunately, the second time the call came around [for Bad], I was able to make it.

AllMusic: What was going on when the call came in to do a song for Footloose?

East: We had done one record, Vox Humana, and so we had been in the studio, and I was in there recording with Lionel Richie, I did a bunch of Pointer Sisters sessions around that time. On Vox Humana, I’d co-written some songs with him, and we were becoming brothers in music. It was prior to Live Aid that we went in and he got the soundtrack for Footloose, which won Song of the Year at the Grammys in 1985. I think by summer ’83 we were running around and practicing it on the road. Every day on the road we heard, “OK, we have this movie, Footloose—Footloose, Footloose…”

He started coming up with little bits and pieces at a time, and it was really pretty tedious, because over the course of a summer tour, everywhere we went, we’d have to find a place in the hotel, like a banquet room, where we’d go and set up our gear and run the song. I remember dialing in the part a little more each day, so when we went to the studio to record it, it was only one or two takes. We were glad to get that out of the way.

AllMusic: How much direction was given about the style of the song and how much it should tie into the movie?

East: The bottom line is since it was called Footloose, it was going to be a dance film, so it had to be an uptempo, active-feeling song. There was a screening after it was all put together, but not until then did we actually see the movie. Kenny probably met with the directors prior to going on tour, so he had all the intel on what he needed and wanted. A lot of times what they’ll do is have temporary beats in the film, and you can use that. I’m sure what they had at the time was the [sings “Footloose” beat], that was the direction they wanted. On my end, and maybe it was out of boredom, but every day I was trying to add more to this bassline so it becomes this driving, forward motion that made sense, and would be something that could be identified with the song as well.

AllMusic: How much of that was to actually serve the song and how much was out of boredom?

East: I think it was about 50-50. After a couple of weeks, when you’d be in rehearsal and see his lips form the word “Footloose,” you start to get a little twitch. We definitely knew that song inside and out when we went into the studio to record it, and that made it all the more solid for the film.

AllMusic: And was it a hit immediately?

East: Pretty much. Having a motion picture as your video for a song definitely doesn't hurt. At that point, the movie came out, the single came out, and it shot to the top, it was one of those times when you couldn't turn the radio on without hearing that song.

AllMusic: Even though you were a little tired of it, was it fun to play live?

East: We played it at Live Aid, and that’s one of the first times I met Eric Clapton. He was standing at the side of the stage, listening to the band, and then he immediately approached me when I got offstage about getting together. I think when we played it live, it was one of those undeniable home run hits where everyone was responding to it, and after all that hard work, it felt good. You’d break into it at the show, and it was like a hypnotic trance people would get in and just start dancing.

One fun thing with “Footloose” was that he included the band on the little breakdown section, we each got a line. Steve [Wood, keyboards] sings, “You've got to turn me around,” and I sing, “And put your feet on the ground.” That was a big line, the first record I ever sung on was a Number One record. And I do it live, too, as well. It was on the radio the other day, and my son said, “Wait, daddy, here comes your line!” He made us all listen to my little solo singing line.

AllMusic: How do you feel when you hear it now?

East: The healing process began over time. When I hear it now, it’s a lot of fun to reminisce.

AllMusic: How did you and Kenny end up parting ways?

East: It was right around that time that the call came from Eric Clapton to record and tour, and Phil Collins was producing, so the band we put together was a quartet with me, Eric, Phil Collins and Greg Phillinganes, and that was right around 1986. Once we put that band together—which we called the "Heaven Band," because we had so much fun—we started touring, and that was the beginning of those multiple shows at the Royal Albert Hall in London where we started with six nights, and the next thing it was 12 and 18 and 24 nights. After touring with Kenny for a few years, I jumped on the road with Eric.

AllMusic: Was that a zero hesitation decision?

East: Yeah, as a matter of fact, I can remember the excitement in telling Kenny Loggins that I got a call from Eric Clapton, he was saying, “Please, give him my love.”

AllMusic: With all of his movie themes and him being so closely affiliated with a specific time in music, Kenny Loggins gets some teasing these days. What are people missing?

East: He’s one of the great songwriters, and his catalog, the collaborations, like “What a Fool Believes,” the things with Michael McDonald, those are some of my all time favorite songs, period. We had a good time writing together, and he’s one of the most musical guys I've worked with in terms of really understanding how to put a song together. I guess from being on the inside, I don’t have a vision of him except for he’s my buddy who I love working together and hanging out with. Whenever I’m up in Santa Barbara I give him a shout to go grab a meal or whatever. I do a lot of shows for Yamaha and some corporate shows that we end up running into each other on, as well. He’s a good, dear friend.

Photo with Kenny Loggins provided by Nathan East, taken at Live Aid in Philadelphia on July 13, 1985