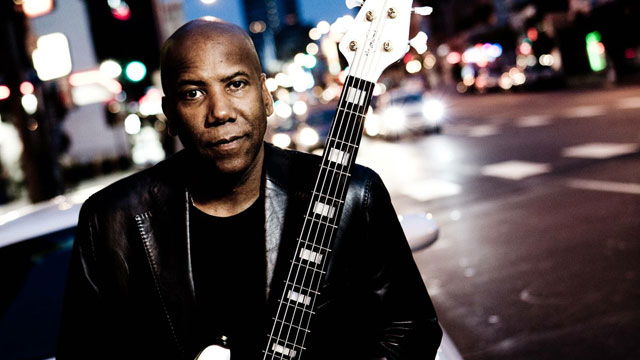 You may not know Nathan East's name, but it's impossible for you to have not heard him play. Ever heard Daft Punk's "Get Lucky"? Eric Clapton's "Tears in Heaven"? Any song off of Michael Jackson's Bad? "Easy Lover"? "Footloose"? East played on all of them. He was part of the crack team Daft Punk brought in, alongside Nile Rodgers, to give last year's Random Access Memories its disco-funk-meets-electronica feel. This year East released a self-titled solo album, featuring appearances from Stevie Wonder, Michael McDonald, and Clapton, and includes a song called "Daft Funk," which pays homage to the sound of the French duo and to East's experience recording and performing with them. We've got the premiere for the video of the club remix of the track, and also had a brief chat with East about his time with Daft Punk, including the star-studded Grammy performance that stole the show.

We thought about trying to dig into his catalog of music, but realized we'd barely be able to scrape the surface. Be on the lookout for a new recurring feature, where East sits down with us to go through some of his hits—and perhaps some deeper cuts—in detail. If there's a track he played on that you especially want to hear about, let us know and maybe we'll get you some answers.

AllMusic: The video for "Daft Funk" looks like it was probably a really fun day of shooting.

Nathan East: The shooting was downtown in the loft area of east L.A., in a warehouse. It was fun to be there with the dancers, they’re physically in amazing shape, you see them up close and it’s just muscle. We had a good time, they were having fun, and it was fun to kind of have the song in that setting, where you have folks dancing and having a great time.

AllMusic: As a guy who plays in the studio and in live bands, have you often been called upon to appear in music videos for the tracks you play on?

East: It’s off and on, I remember back in the day when MTV and VH1 were big, I remember being in a lot of videos, I was in “Would I Lie to You” by the Eurythmics and lots of the Clapton and Collins videos. Back in the 80’s and 90’s, it seemed MTV was really the go-to place, so I've been in quite a few.

AllMusic: You performed "Get Lucky" with Daft Punk at the Grammys, along with Stevie Wonder, Nile Rodgers, Pharrell, and some other great musicians. We could probably just talk about that for the rest of our time.

East: Man, that was fun. Omar Hakim on drums and Paul Jackson, Jr. on guitar, it was amazing. Preparation started a week before, we started on the Monday before and we rehearsed every day, just because it was going to be a big moment and there were a lot of things to get together. The day before, we rehearsed on the Grammy stage at the Staples Center, and Stevie came by and everything. At that rehearsal I saw Paul McCartney and Ringo out there dancing, and it was pretty exciting. It was a cool set, and it was a fun vibe. If you’re into music, that was like ground zero for the center of the musical universe, it was right there that night, and it felt great to be right there, partying with everybody.


AllMusic: Even if you're not into disco, funk or electronica, there's still something about that song where if you don't like it, you're kind of a curmudgeon.

East: It’s funny, it’s really one of those things where it’s just an infectious groove and sound. That song should be a study; the key, the chord changes, everything about it should just be a study on what a great song is. I remember I was in Japan with Eric Clapton earlier in the year, and I started playing the first two chords of the song, and he didn't even know what I was playing, and he goes, “I like that, what’s that?” There’s something about that song that if you don’t like it, you don’t like the sun.

AllMusic: You've played on so many recordings, do you ever hear a song out in public where it takes a while for you to remember that you're listening to yourself?

East: That happens a lot, especially overseas. I've been in a lot of places where you’ll hear a song you worked on, or I’ll see bass players playing my signature bass, and you don’t really realize your influence when you’re in a little room in your town just going to work, and the next thing you know, the reach is global. It’s pretty rewarding to know that people are paying attention and it does mean something.

You haven't heard the last from Nathan East. Let us know if there's a song of his you particularly love, and maybe we'll ask him about it.