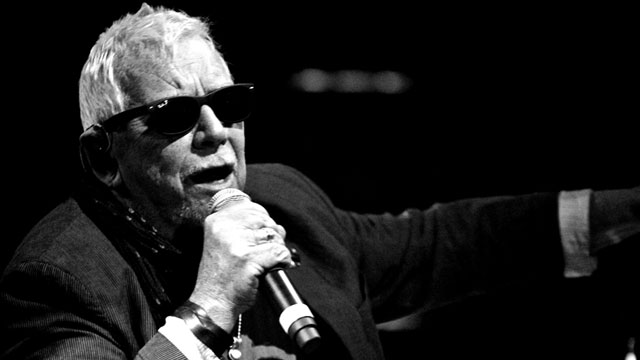 Eric Burdon has been singing and screaming his head off with the Animals and War since the early '60s, writing and performing songs that became part of the tapestry of the era. As the band matured they wrote more and more of their own songs, but many of their earliest hits were covers of traditional and contemporary songs. Since Burdon knows a thing or two about interpreting others' material, we thought it would be fun to send him a list of different takes on songs he either wrote or made famous. And as an extra wrinkle, we kept it to artists in the worlds of hard rock and punk, ensuring that he was hearing his songs performed in styles that didn't exist when he originally sang them.

50 years removed from helping spearhead the British Invasion, Burdon continues to tour and record. His latest album is the four-star 'Til Your River Runs Dry, and tour dates can be found at his website.

Fear - We Gotta Get Out of This Place

Perhaps best known for providing the soundtrack for the pandemonium that broke out during their Saturday Night Live performance, Fear covered "We Gotta Get Out of This Place" on their classic 1982 debut, 'The Record.' It was written by the husband and wife songwriting duo who wrote "You've Lost that Lovin' Feelin'," and this track was also intended for the Righteous Brothers, but the Animals imbued it with a pleading sense of uncertainty that later made it an unofficial theme song for armed forces in Vietnam.

Eric Burdon: This was one of the best LA punk bands. They had a ton of spirit and a great sense of humor. This song almost seems too serious for them but I appreciate the energy of it.

Ramones - When I Was Young

"When I Was Young" and its B-side—which we'll get to very shortly—rank among the band's finest psychedelic moments, so it's no surprise that it would continue to lure in multiple generations of freaks, a term used lovingly here. The tantalizing riff that echoes each use of the song's title is instantly memorable, and the Ramones couldn't resist including the song on their 1994 covers album, 'Acid Eaters,' alongside tunes from other heroes of the psychedelic era like Jefferson Airplane and Love.

Eric Burdon: One of my earliest songs, done by the original, prototype punk rock band. Nobody's ever had the good-natured charm of these guys. It's a joy to hear them play my song like they mean it and I wish they were still around. Their version is so close to the original and to be honest, I really like the Ramones, so I was expecting something more than a cover.

The B-side to "When I Was Young," this track took its title from the company where the scientists who discovered LSD worked. The Smashing Pumpkins performed the song only a handful of times in the early '90s, but it was included on their 'Peel Sessions' EP and later on the 'Pisces Iscariot' collection, which is probably the only time this song and Fleetwood Mac's "Landslide" have ever been in such close proximity.

Eric Burdon: Interesting. They capture some of the mind-expanding qualities of the original. A mix of acid and punk! (I think that's where I am heading next!) It could be more powerful if the vocals were brought up in the mix.

Not one of the Animals' biggest hits—and relegated to a B-side in America—the regretful tone of "Good Times" was attractive enough for Ozzy Osbourne, the only other Englishman on this list, to include it on the covers disc of his box set, then later on a stand-alone album, 'Under Cover.'

Eric Burdon: Ozzy has lasting power that not many would have predicted when Black Sabbath first appeared on the scene. They were looked at as a comic book band, much like Kiss. But he's turned out to be an elder statesman with a massive following. Hats off to Ozzy. Nice rendition, too.

Mutoid Man - The Manimals (aka "Don't Let Me Be Misunderstood")

Originally recorded by Nina Simone in 1964, then by the Animals the next year, the side project of Stephen Brodsky (Cave In) and Ben Koller (Converge) threw in a deliriously sludgy, stomping version of "Don't Let Me Be Misunderstood" on their 2013 debut, 'Helium Head.'

Eric Burdon: I am glad that Nina Simone is not around to hear this!