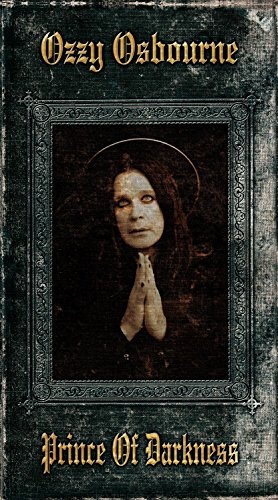 It's surprising that with all of the media attention aimed at Ozzy Osbourne, the self-crowned "Prince of Darkness," since his debut as the perpetually numb rock star dad on The Osbournes, it took so long for his incredibly savvy marketing-machine/wife to put out a proper box set. Prince of Darkness is problematic from the get-go; here you have an artist who fronted one of the world's most influential and coveted heavy metal bands and put out a string of excellent solo albums and singles, then went on television and became the world's most gawked-at wreck on the pop culture highway since Michael Jackson turned white and hijacked Diana Ross' nose. The four-disc set aims to satisfy fans of both Osbourne personas. Discs one and two storm through the singer's '80s and '90s solo heydays with an emphasis on previously unreleased live recordings ("Goodbye to Romance"), B-sides ("Spiders"), as well as classics like "Flying High Again" and "Crazy Train." Disc three is a compilation of bizarre collaborations with everyone from Kim Basinger ("Shake Your Head [Let's Go to Bed]") to Miss Piggy ("Born to Be Wild") to Dweezil Zappa ("Staying Alive") that culminates in an oddly affecting ballad ("I Ain't No Nice Guy") with Motörhead mouthpiece Lemmy Kilmister. Disc four features newly recorded covers, some that work (King Crimson's "21st Century Schizoid Man" and Mountain's "Mississippi Queen" were tailor-made for Osbourne's wily vocal style) and some that don't ("For What It's Worth" and "All the Young Dudes," the latter featuring a very manic Ian Hunter guest vocal that sounds more like an old man stuck in his bathroom than it does a rowdy call to arms). Osbourne states in the beginning of the impressive 40-page booklet that he "wasn't terribly happy about the prospect of repackaging and reissuing another compilation of the same songs you can get on another one of my albums," and the care that's been put into heeding his sentiments is apparent throughout, but one has to wonder whether or not it's fair to the man himself, as his slow climb to the throne has seen him go from mad pauper to prince of darkness to a sad and clueless king.