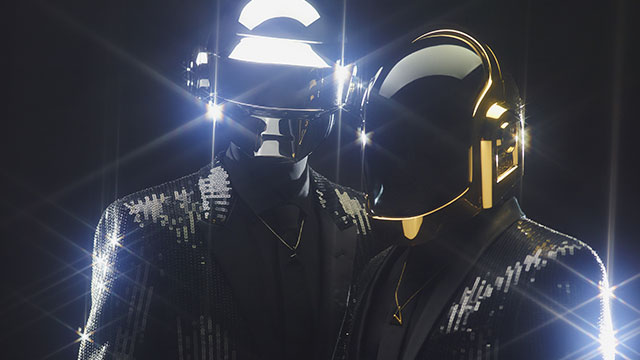 Parisian progressive dance purveyors Daft Punk just released their first new album in eight years, Random Access Memories, and here at AllMusic that's cause for celebration. In contrast to their other work, as our own Heather Phares observes, "Daft Punk separate themselves from most contemporary electronic music and how it's made, enlisting some of their biggest influences to help them get the sounds they needed without samples. On Homework's 'Teachers,' they reverently name-checked a massive list of musicians and producers; here, they place themselves on equal footing with disco masterminds Giorgio Moroder and Nile Rodgers, referring to them as "collaborators." The result is an album that "taps into the wonder and excitement in that era's music" and makes for the duo's "most personal work, and richly rewarding for listeners willing to spend time with it." In the spirit of Random Access Memories and "Teachers" before it, for our latest playlist our editors shine a light on artists that forged a path for Daft Punk, and those who may not have come to be without the influence of Daft Punk.

Get the editors' picks in blurb and video form below and subscribe to the playlist on Spotify -- and keep the music playing by sharing your favorite songs by artists who inspired, or were inspired by, Daft Punk (more on that at the end of this post).

Paul Williams - “Roan Pony”
Although it is Paul Williams’ 1974 rock opera masterpiece Phantom of the Paradise that most informs his guest spot on Daft Punk’s Random Access Memories, his early songs also have much in common with the French duo’s melodic dance music. “Roan Pony,” off Williams’ classic 1970 debut Someday Man is a great example. With its jaunty, out front bass line and funky, go-go influenced drum beat, the song, co-written by Williams and Roger Nichols, prefigures the ‘70s disco boom. Then, consider William’s lyrics, which find him reflecting on the freewheeling cowboy dreams of his youth, and the song becomes even more entwined with Daft Punk’s own penchant for revisiting the past both musically and with a halcyon fetishization of a more glamorous, hopeful time. - Matt Collar


Munich Machine - “In Love With Love”
It could be said that ‘70s electronic music pioneer Giorgio Moroder is the Godfather of all EDM. To prove this point, one need look no further than Moroder’s own early projects, which prominently feature a synthy primordial disco ooze that would later inspire Daft Punk’s own signature brand of robotic dance pop. In fact, the sleeve for the Moroder-produced disco group Munich Machine’s 1978’s album A Whiter Shade of Pale even features the band’s vocalist, Chris Bennett, wearing a very Daft Punk looking set of futuristic goggles on the front cover and dancing with two sci-fi robots on the back cover. On that release, the song “In Love with Love” is particularly reminiscent of later Daft Punk cuts; a kitschy, romantic dance floor anthem, replete with fuzzy, robot vocoder vocals. - MC
https://www.youtube.com/watch?v=6Wixm6k_UaY

Who’s Who - “Palace Palace”
Thomas Bangalter's dad Daniel was also a songwriter and producer in the '70s and '80s, and a track like this makes it easy to see how the gene for creating super simple, super hooky dance tracks was input deep within the young lad from the start. It's really not a million miles away from something Daft Punk might have done if they had aimed for something a little less robotic, something a little sillier. Love the vocoder here... young Thom sure learned a thing or ten from dear old dad. (Check out the awful "D.I.S.C.O." by Ottawan to hear one of Daniel's misfires and be glad Thomas didn't follow in these crummy footsteps.) - Tim Sendra


The Trojan Horse - “What $ Love (What Price Love)”
Released in 1993, the same year Bangalter and de Homem-Christo debuted with future Phoenix member Laurent Brancowitz as noisy indie rockers Darlin', this is an early and exceptional production from Anthony Moore, AKA Romanthony. Within a few years of this typically invigorating release, Daft Punk name checked Romanthony in "Teachers," and then they were fortunate enough to snag him for "One More Time" and "Too Long" -- two songs that mean more to the discography of Daft Punk than that of the singer. Moore recently passed away and left a major legacy as a house producer, DJ, and singer. - Andy Kellman


Breakbot featuring Pacific! – “By Your Side, Pts. 1 & 2”
Daft Punk's contributions to the French Touch movement were so profound that the work of many of their countrymen felt almost like a cottage industry designed to fill the void during the lengthy gaps between the duo's albums. While many of the acts that sprang up in Daft Punk's wake tried to make the sequel to Discovery, Breakbot concentrated on a shared love of straight-ahead disco and proudly sentimental pop, both of which the two parts of "By Your Side" have in spades. Interestingly, Daft Punk also emphasized those two elements on Random Access Memories, suggesting that Breakbot could one day make something as epic in scope as that album (if Ed Banger was willing to give him a zillion-dollar budget). - Heather Phares


Letherette - "D&T"
The funky, stylish, retro-yet-contemporary sound Daft Punk forged on Homework, and especially Discovery, led to countless other acts mining that territory for similar gold. Letherette's "D&T," from their self-titled debut album (which arrived just weeks before Random Access Memories), borrows the French duo's fondness for finely chopped samples as well as a breezy fashionability that makes even the most noodly guitar solo seem impossibly cool, and takes those elements in a wittier, lighter direction than many of their Daft Punk-aping contemporaries. - HP


Kavinsky - “Testarossa Autodrive”
The grand concept here is that French house producer Vincent Belorgay's project/character Kavinsky crashed his Testarossa in 1986, and then reappeared as a zombie in 2006 in order to make electro and show off his racing skills in animé-like videos. The Daft Punk mythos is less structured and ever evolving, but with French, electro, and disguises in common, Kavinsky owes the duo a tip of the helmet, even if he got his start by making music on a computer gifted to him by the one and only Mr. Oizo. - David Jeffries


Listen to our editors' picks above, and keep the music playing by sharing your favorite songs by artists who inspired or followed Daft Punk. Spotify users can contribute by adding AllMusic Editors to your people list, and then sending your selections to our inbox. Not a Spotify user? Share your track picks on the AllMusic Facebook page or by tweeting @AllMusic with hashtag #daftpunkb&a.