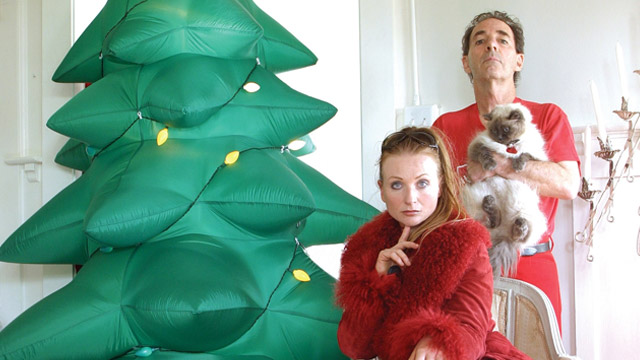 Just in time for this year's holiday festivities is a new rendition of Spinal Tap's 1992 track "Christmas With the Devil," reimagined by Derek Smalls himself, Harry Shearer, and his wife, singer/songwriter Judith Owen. Proceeds from the single (available on iTunes) and Shearer and Owen's annual "Christmas Without Tears" Holiday Sing-Along Tour will benefit mental health charities.

We also chatted with Owen about her personal affinity for "Christmas With the Devil," her particular brand of stage banter that she shares with her husband, and one of the most Spinal Tap-ish scenarios she has encountered in the real world.

AllMusic: Obviously the timing makes sense, but what else stands out to you about "Christmas With the Devil"?

Judith Owen: Some years ago, before we started doing the Christmas show, we were doing a charity performance called Christmas in July, and it was the first time that Harry and I ever worked together on music. We thought, “What should we do that would be fun to blend both our talents?” and there is no greater Christmas song than “Christmas With the Devil,” it’s just fantastic, and I've seen Harry perform it with Spinal Tap with a giant devil’s tail on, so we thought we’d do that together. When we started doing our Christmas shows, which we've done every year since Hurricane Katrina, we figured that would be one of our favorite songs to bring out, because it’s an irreverent show, and it’s become our annual favorite to do together.

It’s so perfect for Christmas, because I find Christmas to be a really hard time of year, I think a lot of people do, and I struggle with it every year, I get very down and depressed because I miss my family and I’m far from home. There’s so much pressure for it to be perfect and to spend too much money and to get on with your family. I feel that the point of having a song like “Christmas With the Devil” is to bring humor and a well-needed antidote and irreverence to this most silly of seasons. The B-side is "The Dancing Tree,” which could not be further from what “Christmas With the Devil” is. These two songs sum up how I feel about Christmas, and you have to have a sense of humor to make it through.

AllMusic: How far back does this version of the song go?

Owen: I think I did that 10 years ago. I like taking really male rock songs, the more testosterone, the happier I am, so things like “Smoke on the Water” and “Eye of the Tiger” and “Black Hole Sun,” and making them into really female arrangements, I make them over so they sound like I wrote them and they belong to me. Doing this for my favorite band was perfection. Spinal Tap is what brought Harry and I together, anyway, if I hadn't seen him in London doing a show in the nineties, I would have never met him and I wouldn't be here. It all comes back to Spinal Tap. There’s nothing better. Every word out of every metal band's mouth, whenever I hear a band talking, I’m seizing up with laughter, because everything sounds like Tap. Harry and I were once waiting behind Oasis when they were checking in, and obviously they’re not a metal band, but they were checking onto a plane at LAX, and the two of us were almost crying, because it was a scene from Spinal Tap, where they’re trying to get 20 pieces of equipment on for the price of two, and it was hysterically funny, it was a complete scene.

AllMusic: The video shows off a bit of your personality, too. You seem genuinely exasperated with Harry at the end.

Owen: For the video, we weren't going to do it as Spinal Tap, that’s not who I am and that’s not right. What we tried to show in the video is that onstage, Harry and I are like the Bickersons, in the nicest possible way. Harry’s constantly rolling his eyes at me, and I am constantly rolling my eyes back. There’s a certain lovable irritation between the two of us that only happens when you’re a married couple. I realized from the get-go that I had to sing this song seriously and not do the wink of the eye, I’m singing it with absolute seriousness, and that Harry’s stomping on my seriousness and taking over is the joy of it. That’s the relationship we have onstage, we laugh a lot and we bicker a lot, because we’re married.

Video Premiere: Thomas Giles (Between the Buried and Me) - "Siphon the Bad B…

Video Premiere: Thomas Giles (Between the Buried and Me) - "Siphon the Bad B…