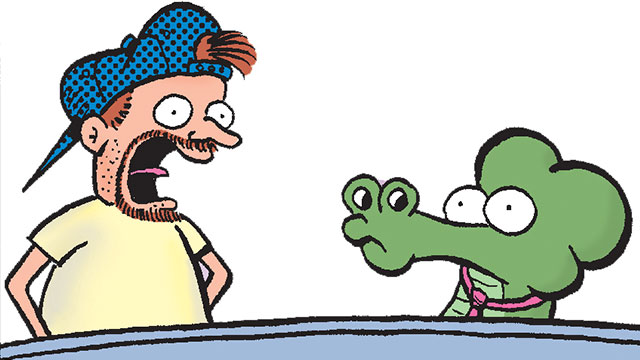 Stephan Pastis blew the minds of comics fans around the world last week when he revealed that the "guest artist" depicted in the week's Pearls Before Swine strips was Bill Watterson, the retired, reclusive mastermind behind Calvin and Hobbes. We spoke with Pastis about a month before the strips ran, and while he didn't let on that something big was coming, he was excited to talk about how music is an essential element in his creative process, the magical experience of his first concert, and how he gets inspiration from Bob Dylan to go against the grain.

AllMusic: I attended a Q&A you did where you briefly mentioned how important music is to you and your work, so I thought we could get deeper into that. How do you use music on a daily basis when making the strip?

Stephan Pastis: Since the very beginning of Pearls, I’ve been listening to music. Before iPods, I would just play the music loud in a room at my house, and when it got to be too much I’d put on headphones, but when the iPod came along, I was able to go outside and go to cafés and do the same thing. This morning I went to a café and wrote and listened to music as I write, it’s pretty much my standard thing, Monday through Thursday. I listen at a fairly loud volume, mostly so I can drown out the rest of the café. It’s great, I don’t know how to do this without music. It’s pretty much the key component.

AllMusic: What did you listen to today?

SP: I usually have set playlists. Today I listened to Moby—I really like Moby, is that embarrassing? Clap Your Hands Say Yeah, the Smiths, James, Spoon, Damien Rice, Arcade Fire, Bright Eyes, Band of Horses, Springsteen, Macklemore, Angels and Airwaves, Zeppelin, Florence + the Machine. There’s quite a bit of rock. Most of the time it’s a bit more worn down or introspective, I think it makes it more moody, it makes it more soul-searching. I like songs that take you somewhere, and maybe some people can do that with a peppy Broadway musical tune, but I can’t. The songs that tend to make me go someplace typically tend to be more introspective. One that I've listened to more than any other while writing is the live version of “Bad” by U2 on Wide Awake in America, which is really good. I think that’s a good example, it takes me someplace else.

AllMusic: What is it about that particular version of that song that gets to you?

SP: Why does any music grab you? There’s just something about the melody. I rarely listen to words; in all the ways music has to communicate, words are sort of the least articulate, and, to me, the least important. Words are just sounds, but they’re sounds we all agree mean certain things, so a much more effective means of communication is just sound itself. Maybe it’s that Daniel Lanois. I like how he produces, he creates a certain moody, ethereal atmosphere. I don’t like his own music, but I do like when he produces someone else. He creates a moody little subtext for them to play over, which is pretty cool.

AllMusic: Did you see them live around that time?

SP: It was when Joshua Tree came out, I went and saw them live at the Oakland Coliseum. It was life-changing, that was so great. That was my first show. I completely remember it, and you can see the exact same moment in Rattle and Hum, in "Where the Streets Have No Name," there’s the part where they turn the lights on over the crowd, and there’s something about that in that moment that’s so electric. In their live DVD from Slane Castle, when they transition from “All I Want is You” to “Where the Streets Have No Name,” it’s unbelievable. The audience is just one, they’re all jumping together in unison, and it’s so moving. I've watched that over and over. I challenge you to watch it and not be moved. I know Bono can be annoying for some people, and I understand why, but man, there are moments of certain songs that connect with people, and that moment is like this quasi-religious moment where something shifts in the audience.

AllMusic: I'm with you on not finding lyrics to be very important.

SP: The voice is just an instrument. Look at Janis Joplin, did she ever say anything memorable? It was how she said it, it’s what she has in those vocal cords. Same with Billie Holiday. It’s a funny little thing to pick out of a song as being important, sort of like someone who says, “I just listen for the tambourine.” It is part of the song, you’re right, but maybe the least important part. Sorry to all the tambourine players out there.

AllMusic: Has your music fandom crossed over into Pearls?

SP: I've mentioned some. I mentioned R.E.M. in a strip once, and the band sent me a whole bunch of cool stuff. They sent me almost all of their CDs and a sheet of Michael Stipe's lyrics that I guess he’d used onstage—I think he keeps the lyrics at his feet sometimes, for some of the harder songs—and a bunch of DVDs of their concerts. It was really nice, and I think I sent the original strip on to them. I don’t really connect with musicians in that way, but it would be cool to think that some of them read the strip.

AllMusic: Are you a big R.E.M. fan in particular?

SP: I have almost all their stuff, I do like them. That was a whole Sunday strip focused on them, it’s one where Pig and Rat put on “It’s the End of the World As We Know It,” and, like the rest of us, we really only know “Leonard Bernstein.” For people who know the song, it’s a real generational connector, and for people who don’t, it was just a real mystifying strip that made no sense.

AllMusic: What are some songs that you think are perfect?

SP: "Yesterday," "Sloop John B," or I can name 30 Dylan songs. There are probably some unusual ones, like "If You See Her, Say Hello." I’m a big Blood on the Tracks fan. In my car there are six CDs, and I think five of them are Dylan. It’s been that way for months, I haven’t changed them out, I just keep listening to them. One or two of them were the soundtrack to that Scorsese film that he did on Dylan, some of the takes are really interesting. It also has what I think is one of the most inspirational moments in all of art, which I listen to sometimes to get me started writing. It’s the moment when he’s playing at the Royal Albert Hall in ’65, ’66, when he’s gone electric. Everyone knows about Newport where he gets booed off the stage, but this was one I don’t think as many people know about. It’s when the band comes out and they electrically play “Like a Rolling Stone,” and you have to listen really carefully, but somebody yells “Judas!” like he betrayed folk music, and Dylan, as is his wont, replied perfectly back, “I don’t believe you,” which is a weird thing to say. If you listen really closely you’ll hear Dylan turn to the band and say, “Play it fuckin' loud!”

That’s so inspirational. As anyone who creates knows, it’s your job to lead, and sometimes the audience doesn't immediately follow. In the case of being a musician onstage, it’s the best example of that. Unlike a painter or a poet, when they’re creating art they’re doing it onstage in front of an audience, and so when the audience rejects you, I think most people would think that the object of a musician is to entertain them, but Dylan showed that actually it’s not, the object is to create the best art you can and see what happens, and he believed it was great. “Like a Rolling Stone” goes on to be one of the most famous rock songs of all time, and that night all the idiots in the audience were booing it. When he says, “Play it fuckin' loud,” it’s a declaration of independence for anybody creative. It’s just great. Dylan’s on another plane. I think after he dies, one day, maybe 15 years from now, people are going to look back at the 20th century and say, “He was the most important artist of that century, in any genre.” I don’t know how anyone competes with Dylan.

AllMusic: Is there anything that you've been trying to get your friends into?

SP: Have you heard of this Israeli guy, Asaf Avidan, he sounds like a black woman from the '60s singing on Motown. I think I heard this for the first time on NPR, and I already spoiled it by telling you it’s a modern guy, you’d say it’s a woman singing soul from the 60s. Listen to “One Day,” you won’t believe that’s a guy. He’s fantastic.

AllMusic: Do you ever get to cross paths with musicians or are your worlds pretty separate?

SP: This was before Pearls, it was the summer of 1989, and I was backpacking through Europe. I was in London, and I saw the original Hard Rock, so I went inside, and I didn't know something was going on, but I walked in and found out I didn't belong there. It was some press conference thing, and around me were Lou Reed, Chrissie Hynde, Bryan Adams, Annie Lennox, the guy from that band, they were all there. I was just amongst them, and I realized you needed press credentials. Everyone had them around their neck on these lanyards, so once I caught onto that, I leaned into this pillar so you couldn't see my chest, and at that point I was already in, so I got to hang out with all these rock stars for the day, it was so cool.