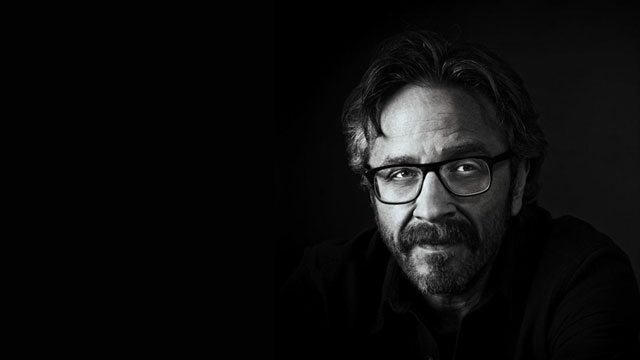 Less than 10 years ago, comedian Marc Maron was releasing albums with self-deprecating titles like Not Sold Out and Tickets Still Available, but now he's one of the busiest people in comedy and entertainment. His WTF podcast just released its 500th episode last week, his IFC show is in the middle of its second season, and his latest special, Thinky Pain, was just released on vinyl. WTF began as a comedy-centric interview podcast, but eventually Maron branched out into interviewing musicians, and frequently discusses his love of music. We called up Maron while he was waiting for Chris Cornell to show up to tape an episode of WTF (posted online this morning) to talk about his music listening habits, how to get through an interview with a difficult musician, and the albums he keeps returning to.

AllMusic: You're a pretty busy guy, when do you find the time to listen to music?

Marc Maron: I listen to music all the time. I’ll load up my phone and I’ll listen to new stuff on my phone, and I try to keep a good mix going. When you buy new music now it usually comes with an MP3 download, so I can listen to the vinyl, but I can also listen to stuff on my phone. I’m always listening to music, like if I rent a car I always bring my plugin, so I can plug in my phone. I've been sort of compulsive about listening to music lately. I have a setup now where I have a pretty good stereo, I have it set up in front of my couch, so if I’m really focused, I’ll sit there and listen, and I do that a lot. I came home with a bunch of records yesterday, and then somebody sent me a shitload or records, so I’ll sit down on the couch right in the middle of the speaker range and take it in.

AllMusic: I saw Ted Leo and Aimee Mann's new band, the Both, recently, and they're pretty funny onstage. Are there any musicians you remember seeing and thinking they were funny?

MM: Aimee’s funny and Ted’s funny, they’re comedy fans, comedy people. They aren't known for that, generally, but some of them are funnier than others. I think historically, in between song banter has been a nightmare. I remember when I was really young I went to see Gordon Lightfoot, and some of those folkies can integrate a great narrative and storytelling into their thing a little more. It’s not really in between song banter, it’s more part of the show. I don’t have any profound recollections of musical acts being hilarious, but I think people who are a little more laid back and never have a planned shtick, that works. Usually it’s a little awkward, isn't it?

AllMusic: Ted went on a tear making fun of KISS' stage banter. I felt a weird instinct to get up and defend KISS.

MM: When in doubt, make fun of mainstream rock acts. Let’s make fun of a band that ruled the world and changed the lives of junior high school kids everywhere.

AllMusic: Early in your comedy career did you get to meet any of your musical heroes and have a moment?

MM: When I was the doorman at the Comedy Store in the late '80s, people would come in. I made a fool out of myself in front of Eric Clapton. Eric Clapton and Phil Collins came in, and I was cocky and high, so I don’t really know how that went, and neither one of them are really heroes of mine, so the respect factor wasn't really there. There’s a story I wrote in my book about going to get my record signed by Lou Reed, and that was sort of a big deal, but the exchange was very minimal. I didn't really know what to say, so I just asked him what gauge pick he used, and he said, “Medium,” and that was pretty profound to me. But not until I started doing the podcast was I able to spend time with these musicians in a real way. It’s always very intimidating, and I’m always very in awe of musicians. I’m usually not really disappointed, I’m always pretty amazed. With people like Iggy Pop, who turned out to be completely different than I would have anticipated, and spending time with Aimee Mann or Nick Lowe or Thom Yorke or Jack White, it’s never been disappointing, it really hasn't. All my music interviews have been really the opposite of that. J. Mascis was incredibly difficult, because he doesn't really talk much, and I didn't know that going in, I knew he wanted to do the show, so I just kind of persisted, and eventually we found a way to communicate, and it worked out great. Maynard from Tool was great.

There are even musicians who I don’t even know their stuff that well, but if you get them talking and you have the right amount of patience and respect, a lot of them have a lot to say, especially guys who have been around forever. I interviewed Booker T. and John Cale and Benmont Tench from the Heartbreakers, there’s some real history here, and how do you move through that and still honor it? You can’t go record for record. I did have Billy Gibbons in the garage, which was spectacular for me, I was a huge ZZ Top fan as a kid, and he was great, I just had to figure out how to guide him. I've never been anything but impressed or excited to engage about music. Nick Cave was a little difficult, because he’s a bit standoffish. I think that was the hardest time I had with a musical guest.

AllMusic: You mentioned Maynard Keenan and John Cale, who I typically say were the two most difficult interviews I've ever done.

MM: I’m not a Tool guy, so I had to get versed. I missed it, I was at a weird age point, when they started happening, I was already out of high school, but I knew this guy liked comedy and I knew he was very well-respected, but I knew I couldn't honor him in the way a fan would honor him, so I just tried to get it personal as quickly as possible, and that worked. My concern is just having a good conversation and giving his fans something they may not have had before. It was really not about music at all. With Cale, I just got him on a good day, and he was more than willing to talk about experimental, avant garde noise music, all the way through the Velvet Underground and his own career. But I hadn't listened to his new record, so that was a dicey moment, but we got through it.

AllMusic: Is there an album or band you were surprised never took off more than they did?

MM: The Buffalo Tom records, I could not understand why they weren't huge, specifically the one that I listened to the shit out of, Let Me Come Over. Birdbrain was great, too. With those two records, I was like, “This is gonna be huge,” and it just didn't happen.

AllMusic: Do you still try and get people into them?

MM: It’s a long time behind me, I have more new music around. Now I’m in a loop with this weird version of “Walkin' With Jesus” by Spaceman 3. I just bought a vinyl copy of Hunky Dory, which is great. I've been listening to the Silver Jews a lot. David Berman, I just met him in Nashville, that was pretty exciting for me. This Mark Mulcahy album, Dear Mark J. Mulcahy, is a great fucking record. That guy’s been around for years, he was in a band back in the day and he’s sort of resurfaced. This record, I think, is great, I don’t think anyone knows about it. I try to turn people on to that right now. It’s such a crisp production, very earnest approach, it’s got an edge. It’s one of those records that you put on and you say, “This guy means it.” There’s a lot of life here. It was just my general feeling of the album itself, I listen to it all the way through.

AllMusic: What's a song that you think is perfect?

AllMusic: Do you think there's an album you've heard more times than any other?

MM: There are albums that come in and out, like Tom Petty’s first album, AC/DC’s Powerage, Led Zeppelin II and III, they constantly rotate through and become old standbys. I’ll listen to a lot of records over and over again, until they go away, then I revisit them. I’ll commit to a record and just keep going with it until it wears a groove in my brain. Right now, the song "Heroes" has been playing in my head a lot. I don’t know how many times I've listened to Beggars Banquet and Let it Bleed. I definitely listen to records over and over again.