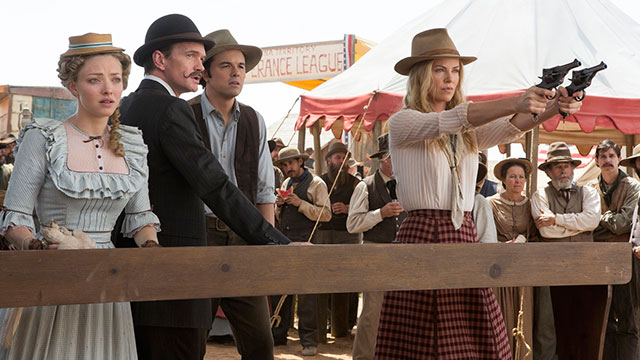 Seth MacFarlane's western farce A Million Ways to Die in the West is out next week, and we have an exclusive stream of the album's soundtrack. It was composed by Joel McNeely, who has worked with MacFarlane on other musical projects, as well as the soundtracks to The Young Indiana Jones Chronicles and action classics like Supercop, Terminal Velocity and Air Force One. But despite the film's heavily comedic nature, MacFarlane tasked McNeely with creating a straightforward, 100 percent serious score for the film, with the slogan "let the music ignore the comedy." So it's not "Yakety Sax" with twangy guitars, but instead a sincere take on the classic western score. Plus, Alan Jackson drops in to sing on the opening theme. We talked with McNeely about MacFarlane's input on the music, what instruments are over-used to convey comedic beats, and what a pro Alan Jackson is.

AllMusic: You could have gone silly with this soundtrack, but you play it pretty straight. Was that the idea from the beginning?

Joel McNeely: Seth MacFarlane is a soundtrack buff, and he knew exactly what kind of score he wanted: a broad, sweeping, thematic, orchestral score. He wanted a score with certain themes in it, so I wrote those themes first, and we tweaked those until we got them the way he wanted them, and then I went to write the individual pieces of music that we call cues. We discussed lots of different westerns that he liked, and I must have watched eight or 10, just to get a feel for the genre, and it's definitely a genre score. It's a throwback, for sure.

AllMusic: What sort of things did you avoid to keep it from getting silly?

JM: In film scoring there's lots of conventions that constitute comedy, and none of them would have been good in this. I'm actually very glad that I didn't have to do that, going between being very straight-ahead and earnest, and then the comedy. I think it would have cheapened the idea of the earnest part of it, and flip-flopping like that would have been enormously difficult. I think it's funnier just playing it straight.

AllMusic: What are some of the musical tropes that traditionally indicate comedy?

JM: Orchestrationally, it's pizzicato strings, xylophone, bassoon sounding very comical. Those are some of the main conventions that say "comedy." Also, you notice marimba in TV shows a lot, it's a trend that whenever you're getting in any way vaguely satirical or comical, they always pull in marimba.

AllMusic: I guess the bassoon is a pretty funny instrument.

JM: Poor bassoon players, it's also one of the most gorgeous of the woodwind instruments, especially when it's used as a solo instrument, in its high register. But they get kind of stereotyped. The other one is the tuba: Tubby the Tuba. Those guys get stereotyped and have to play some pretty silly stuff.

AllMusic: There's a famous story that Frankie Laine didn't know that Blazing Saddles was a comedy when he sang the theme song. Clearly, Alan Jackson knew what was going on.

JM: He knew it was a comedy. We did it in Nashville at Keith [Stegall, Jackson's producer]'s studio that Alan has made all his hits in over all the years, and he did a great job. This is a real professional who knows his stuff. We sent him the demo, Seth sang a scratch track for Alan, and when he came in and it was obvious he'd listened to it. He did it eight or 10 times, and that was that, we had what we needed. He was prepared, he came in and he sang the crap out of it.

AllMusic: One of the most popular western soundtracks is Ennio Morricone's score for The Good, the Bad, and the Ugly, which seems like it would have been easy to parody, but you left it alone.

JM: We didn't go down the stylistic road of the spaghetti western, we intentionally steered clear of that kind of thing. With those movies, Ennio really redefined the genre and brought in his own elements, and they were wildly creative and disparate, and they certainly included twangy guitars and they often had choirs. On The Good, the Bad and the Ugly, he brought in the ocarina and a solo singer to sing that famous melody. He did all kinds of cool stuff, he used a bass harmonica a lot. That was definitely going in a different direction than the Elmer Bernstein style.