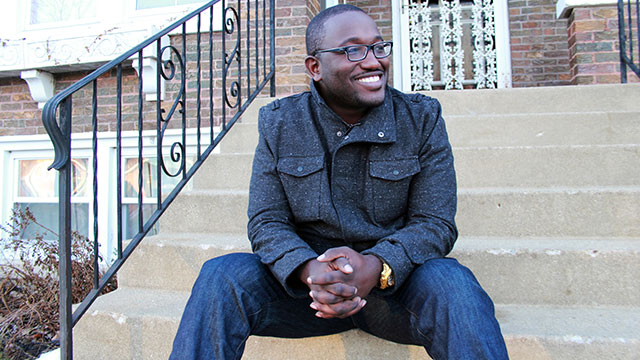 Comedian and actor Hannibal Buress has been showing up in more and more places lately, whether on the outstanding Comedy Central series Broad City, in commercials for the upcoming film Neighbors, or in his new stand-up special, Live From Chicago. He's also written for 30 Rock and Saturday Night Live, and tours regularly performing comedy. Buress often talks about music - and hip-hop in particular - in his act, so we spoke with him to get some insight into his earliest musical memories, which songs he can only appreciate while intoxicated, and which song from two A-list artists he is still surprised didn't become a smash hit.

AllMusic: One of the bits in your new special teases rappers for boasting about being on ecstasy. What's another weak claim you've heard rappers make when trying to sound tough?

Hannibal Buress: There’s a lot of rappers that start off their songs talking about their morning wood. Rappers used to talk about drinking rosé a bunch, that was about two years ago, they kept on talking about rosé. I’d never even really heard of rosé, so I said, “Let me try this shit just to see what’s up,” and I had some and said, “This is all right, but I don’t know if it’s worth rapping about. It’s pretty good, you can get a good bottle for 15 bucks, but why are you rapping about this shit?” Bottles of rosé, what the fuck, it’s just wine.

AllMusic: You also talk about booking your own parade in New Orleans, complete with a band. If you could choose the band for your parade, who would it be?

HB: I think I’d have the Roots; they know all kinds of songs, you’ve got Black Thought, you have ?uestlove, you have everybody. So the Roots would definitely be the band. They could rap, they could do other stuff, and they play on Fallon’s show so they are making music all the time and rehearsing – a tight band with a wide range, you have to have the Roots.

AllMusic: Some of your bits take place when you're going to clubs and getting high and/or drunk. Are there any songs that you can't stand sober that you suddenly love when you're drunk?

HB: That Young Thug song, I don’t listen to it in my regular life, but I hear it sometimes when I’m out in the club. It goes, “Every time I fuck I gotta…” Is it “Danny Glover”? Young Thug, whatever his big song is. So there's that song, or before that “Versace” song popped, my DJ, Rufio, he said, “You have to hear this shit,” he just kept going, “Versace, Versace, Versace,” and I was like, “What are you talking about, man?” “It’s a new song, man, that shit’s catchy.” I was like, “That shit sounds dumb,” and I started to hear it and I went, “Man, this ‘Versace’ shit, this shit is pretty good. I like this song in the club.”

AllMusic: As a kid did you ever have an album that you'd play to intentionally annoy your parents?

HB: I was doing enough stuff to piss off my parents. I was just buying stuff that I liked. I do remember my mom specifically taking a Too $hort CD from me when I was maybe nine or something like that, when I’d ordered some CDs from BMG or Columbia House or whatever. When I was young I was listening to the Wu-Tang Clan and the Raekwon album, that was one of the first CDs I had. I had the Above the Rim soundtrack, that had some great west coast shit on it. Bone Thugs-N-Harmony, I listened to a lot of them as a kid. I wasn't really trying to antagonize my parents, I was just listening to what I enjoyed.

AllMusic: We just talked to Nick Cannon about some of his favorite skits from hip-hop albums, did you have any favorites?

HB: The "[$20 Sack] Pyramid" one on The Chronic, I remember that being funny. The Wu-Tang one ("Torture") was classic. But even when the skits are good, after you hear them a couple of times, you just want to hear the song. It messes up if you want to leave a song on repeat or something. Like “Black Heroes” by Wale has Jerry Seinfeld on it at the end of it, and that’s cool the first two times, but I just want to hear the rapping part. Do I have to go into a studio myself and edit it? I have to make it the way it works best for me. Skits are a big part of hip-hop, not as big as they were, but still utilized a lot.

AllMusic: Do you think there's a song you've heard more than any other?

HB: “Happy” by Pharrell [laughs]. As a kid I had a little Fisher-Price record player, and the record I had of my own was “(Sittin’ On) The Dock of the Bay.” I know that stuck in my head, having that song early on as a kid. If we’re talking about songs that get played in a lot of places, “This is How We Do It” by Montell Jordan gets played a lot. That’s a part of our culture, man. It’s in wedding DJ sets and it’s still played in a legit DJ set, that song is classic. I hope he’s doing well. He should be, if his deal was right.

AllMusic: Is there a song that has made you say, "This song sounds perfect," even if it's not your favorite?

HB: I remember being high at my friend’s house and listening to the last Kanye album, not Yeezus but My Beautiful Dark Twisted Fantasy, and hearing songs on there and saying, “This sounds expensive,” the details. It sounded well-produced. I’d say “All of the Lights” is a really well-produced song, the build of it, you have Kanye’s verse, Rihanna, the other vocals, the instruments, it’s a really well-produced song, it’s a big song. It wasn't a freestyle, that might have been weeks and weeks on that song.

AllMusic: Can you think of a song that you thought would be a massive hit, but never made it?

HB: There’s a song that I liked that I thought would be the single off of Jay-Z’s Vol. 3, there was a track with him and Mariah Carey called “Things That U Do,” and it just sounded like a single. It doesn't hold up the same now, but for that time, and I haven’t listened to it now, but it sounded like a single then, I was like, “This is a single, right, this is Jay-Z, and it's Mariah Carey on the hook, that’s a single." I remember being confused by that. I remember being confused, “Why isn’t this a single? This has Mariah Carey on the hook,” and didn't they do a song that was a single before that? [Mariah Carey's 1999 song "Heartbreaker," featuring Jay-Z, was Number One for two weeks] Mariah was huge, Jay was huge, and I thought that “Things That U Do” just sounded like a single. I think maybe it was intended to be a single and they just didn't use it. I think it was Swizz Beatz on production. It was that type of crossover track, R&B star, rapper, I remember being confused that it wasn't a single.