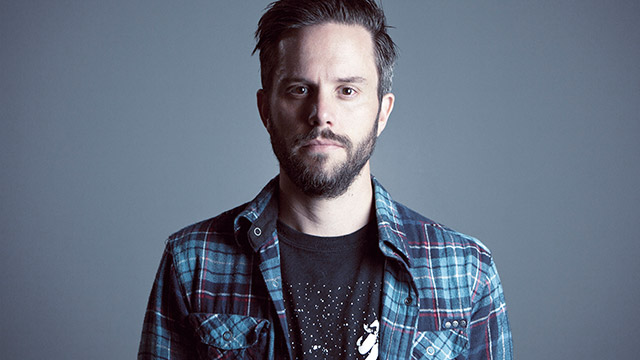 Whether performing as Tommy Rogers, the charismatic frontman of North Carolina prog-metal band Between the Buried and Me, or as Thomas Giles, solo artist, the man has been a workhorse for the past 15 years, relentlessly writing, recording and touring. His second solo album for Metal Blade Records, Modern Noise, carries on the tradition of his eclectic songwriting, ranging from straightforward rock to adventures in electronica to gentle piano etudes. Check out the premiere of the video for "Siphon the Bad Blood," and read on for our conversation about what menial domestic task Rogers was doing when he wrote the song, why he wrote this record on the road, and what his love of Depeche Mode has taught him about songwriting.

Modern Noise can be pre-ordered here.

AllMusic: How do you know when a song you're writing belongs to a solo record instead of a Between the Buried and Me record?

Tommy Rogers: I try to not put projects together at all when I’m writing. If I’m writing my solo stuff, then the band’s not writing anything, or vice versa. With this record, I knew Between the Buried and Me was writing later in the year, so I made sure to get everything done before the band started working on anything. The band’s writing now, so I’m not writing anything else besides that. I keep everything separate just so there isn't some idea that I think should be in one or the other. I don’t think this material would work with the band, especially in song form. There could be sections of this that could, but as far as songs, it’s a very different beast.

AllMusic: You've put out a release just about every year since 2000. Is being creative at that rate exhausting?

Rogers: And as far as writing goes, it’s something I enjoy, that’s my favorite part of the business and the process of being in a band, the creation. Writing has never been a chore for me, a lot of bands say, “Oh, we have to write a record…” but that’s when I get excited. I’m the opposite. I say, “Oh, we have to tour again…” As far as writing on the road, that’s something I've never really done before, I've always been against that. I have a two-year-old now, so writing at home is a little different, I don’t have the time I used to have. I've always struggled with boredom on the road and feeling like I’m wasting my time. Most of the day you’re sitting around, waiting, so this is a way to help me mentally as well as get some work done. I had a schedule and I felt like I was at work every day, and I really enjoyed that, honestly. It helped keep me level-headed and focused on the road and not have my mind wander and get depressed. As far as the high output, I don’t really think about it. I never feel overwhelmed with work, I try to separate everything and never pile things on top of each other.

AllMusic: Can you remember how you wrote "Siphon the Bad Blood"?

Rogers: I’m a big VoiceNote guy, and a lot of times if I get a riff in my head or I’m doodling with my guitar, I record it real quick and work on it later. This riff, I thought of in my mind while I was walking my dog and made a VoiceNote of me humming it, and the song is basically that one riff, different variations of it. That’s a perfect example of how different it is from Between the Buried and Me, where we have a million things going on. With this song, it was based off of a few chords, a big solo bridge in the middle, and that’s that. Lyrically, I've always had a big fear of death, this song is just dealing with that, me trying to accept that, and basically driving myself crazy thinking about it. That’s the idea behind the lyrics, trying to siphon the bad blood in me.

AllMusic: Over the years you've added different qualities to your voice, whether it's more melody or almost assuming different kinds of characters in the vocals. Is it fun to expand what you get to do?

Rogers: As a vocalist, you’re always pushing yourself. With Between the Buried and Me, we really push each other, we try new things, and certain voices don’t work with certain types of music. The longer you do anything, you hopefully progress and get better and more comfortable with what you do. Vocals are the same thing, I’m always trying to find new ways to express myself. Like screaming more melodically, that’s something I've been trying to work hard on that I can’t figure out that well, it’s tough. I do it in the chorus on this song, I’m slowly getting there. Finding new ways to sing is fun, it keeps it interesting, and I like to go outside of my comfort zone, so it’s fun for me.

With this material there’s a lot of free space, there’s not a million things going on, the chord progressions are very simple, there’s a lot more room for me to focus more on melody with vocals, and that’s what’s really fun for me, I want to drive these songs vocally, because hopefully people know me as a vocalist, so I’m trying to push that part of me, and these songs really help me write differently than I normally do.

AllMusic: Do you have nicknames for some of the different voices that you do?

Rogers: There’s a creepy, kind of Tom Waits-y deep voice that I do, and when I record with [producer] Jamie King, he calls it “the molester.” Now he just says, “Hey, do you think you should do the molester over that part?” not even thinking about what he’s saying.

AllMusic: You've covered Depeche Mode in the past, and some of the keyboard sounds on here remind me of Depeche Mode. Are they a constant influence?

Rogers: I totally remember working on one of the songs in a hotel room on tour, and when I was done, I was thinking, “These tones sound like Martin from Depeche Mode.” They’re one of my favorite electronic bands ever. The electronic stuff, I just wing it and see where the song takes itself. There were two other electronic songs that didn't make the cut for this record, but it’s something I enjoy because it’s way, way different from what I normally do. The way Depeche Mode writes electronic songs, they still have a rock format when they write, but it’s electronic, so I have an idea of creating a song with a verse and chorus and a bridge and making it catchy and not just a dance thing, creating electronic moods. That’s what I was trying to achieve with the songs on this record just because I thought it would give a nice dynamic and fit what I was doing with the more rock-oriented stuff, as well.

AllMusic: Can you remember when you got into them?

Rogers: It was later on for me. Growing up, I was a total metalhead, so anything with singing was wrong in my eyes, like, “It has to be brutal or I hate it.” Once I got out of that mentality, I was probably in my mid-twenties.

The old hits, I've always known, and once I was understanding that music a little more, I started diving into the old records. I’m a big fan of their newer material, as well, I think they’re as good or better than they've ever been. The rock element they put into their newer material, I think they’re geniuses. Vocally, when you analyze their melodies and counter-melodies, it’s next level, they have a sense most people don’t have.

'Modern Noise' is out November 25 on Metal Blade Records.