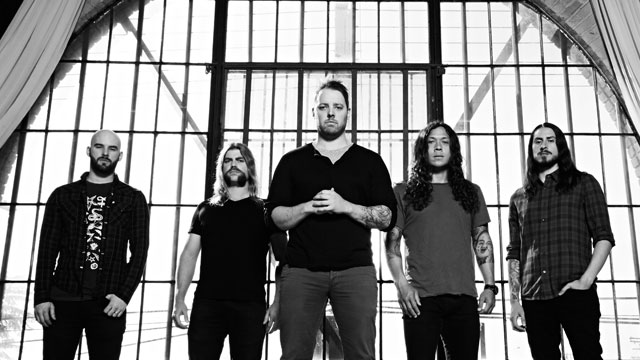 San Diego metal band As I Lay Dying was thrown into chaos when its frontman went off the deep end and wound up incarcerated for a murder-for-hire plot. The remaining four musicians collected themselves, regrouped with vocalist Shane Blay of the band Oh, Sleeper, and christened their new band Wovenwar. Their self-titled debut arrived this week, and shows the band moving past its sing/scream metalcore dynamics and into more soaring, anthemic territory, while retaining the melodic heaviness that made As I Lay Dying so successful. We have the North American debut of the band's first music video, "All Rise," and spoke with bassist and vocalist Josh Gilbert about starting over, finding a new musical voice, and the odyssey the band took to make it to their first show.

AllMusic: The first thing I noticed about the new band is that it isn't just plugging in a new singer to carry on the same sound as As I Lay Dying, it's definitely a different band.

Josh Gilbert: Towards the end of our other band, we were definitely trying to push in a lot of different directions and would be held back by the genre that we were in, the setup that we had, with having a vocalist that was only able to really scream, so it definitely reduces the option as far as what kind of parts you can put into a song. So when we started writing with no boundaries for the vocals, we were just writing music for the songs. We had five demos before we started thinking about vocalists we could give it to, and Shane happened to be the first person we thought of, because his band was about to be taking a lot of time off, so we sent him what we had and he worked on the songs, and the first song we finished vocals and everything for was “All Rise.” That song set the tone for which of the demos out of the original ones we kept working on.

AllMusic: It's easy to hear the lyrics and sound of "All Rise" as a bit of a mission statement for the band.

JG: That song, the lyrics were written by Shane and detail his past struggles in the music industry. A lot of people took them as relating to our situation, but it’s written by Shane and painting certain people in the industry as vampires who are there to suck the life out of you to make a buck. That song is cool and anthemic because you can really apply the chorus to any sort of situation or whatever that you’re trying to overcome. That song came together really fast; it was the first song we had a proper demo for, and Shane came and stayed with me and we wrote the lyrics and melody for it in one night, recorded the whole thing, and it was the first moment where we really realized that things were going to work with the new band.

AllMusic: When it became obvious that As I Lay Dying couldn't continue, was it understood right away that the four of you would stick together?

JG: We were all pretty shocked when we first heard the news of what had happened, and we’d gone our separate ways after a string of a couple of tours. We decided to meet about two weeks later in San Diego and it was unanimous that we all wanted to keep working with each other, the band had been together in its current state for about eight years, so we know each other musically, we know how to operate as a unit really well, there was never any question of whether we wanted to continue or not. We knew we wanted to do something, but it took a little more time for us to really get in there and start jamming, and things really started moving once we got into the room and were with each other again.

AllMusic: You were doing all of the live clean singing in As I Lay Dying, was there ever a thought that you'd take lead vocals in this new band?

JG: That was tossed around a bit, but I want to play bass because from experience of being a guitarist before I was a bassist, I know how hard it is to find a bassist that has rhythm and their own brain, a lot of bassists were just guys who filled the role because no one wanted to play bass, and I didn't want that to be the case with this band. So we started forward under the assumption that we were going to have a setup where I could sing and we’d find somebody who could sing really well and we could complement each other with harmonies, which we could never do live in the past, because nobody else sang in that band. Even on the record, if I harmonized with myself, live it would leave something to be desired. That’s what I think is the coolest part of the setup now, anything you hear on the record that’s harmonized vocally is pulled off live.

AllMusic: During the songwriting did you intentionally try to avoid falling into old habits to keep this band distinct from the old one?

JG: It was surprisingly really natural, going into it with no requirements and not having the constraints that we put on ourselves. With this band we were really writing for the joy of writing music, and we wanted to explore things that, dynamically, we weren't able to in the past. It would have been strange for us to have a minute straight of singing in a middle of a song in the past, because what would the lead singer be doing during that? Prowling around, I guess. With this band, we can take it down a lot of notches for a quiet verse, and build it back up huge for a chorus, and with the setup we had before, it wasn't bad, but it was at 100 percent all the time, and we enjoyed writing that way, but it’s really liberating to just know you can strip something down to a guitar and a vocal and not have to worry about keeping it at 220 beats per minute to keep in the style of singing that we had.

AllMusic: When you played your first live show as Wovenwar, did you get first-time jitters all over again?

JG: We had three days, almost four, to make it from San Diego to Cincinnati for our first show. Within 60 miles, the first RV we had rented broke down, dead in the water, so we immediately started trying to get it repaired. We couldn't, so we tried to find a substitute, but there’s no buses or RVs for rent because it’s summer touring season. Somehow we finally find one, get going with that, and we’re already about 30 hours behind schedule, so we have a seven-hour cushion for the show. Around New Mexico we hit a band of storms that stretched all the way across Texas and into Oklahoma, which was our path, so we went through about 12 hours of the most treacherous rain and wind in this RV that’s probably not qualified to tow the weight of the trailer that we had, so we’re going really slow, sliding all over the road, looking at each other like, “This is the end, we’re going to fly off the road tonight,” but made it 20 minutes before we’re supposed to play. Usually the first day of a tour you get the kinks worked out so once you’re onstage everything is set, but we didn't have time, so we throw everything onstage, and we don’t have monitors or wedges onstage. We played four songs with no stage sound, and no one cared, because they were bummed that it had taken us an hour to get onstage. That will go down in my mind as the most stressful and problem-riddled journey and show that has ever occurred for us.

We thought we were going to miss the very first show, cancel the first show and get kicked off the tour. After that, the next show was one of the best shows I've ever played in any band, it was great to have everything set up and sound good and play an entire set, so as bad as the first show was, it’s a good story to tell. Almost every show got better than the one before it as we went, so it was an awesome tour, it just started on a sour note.