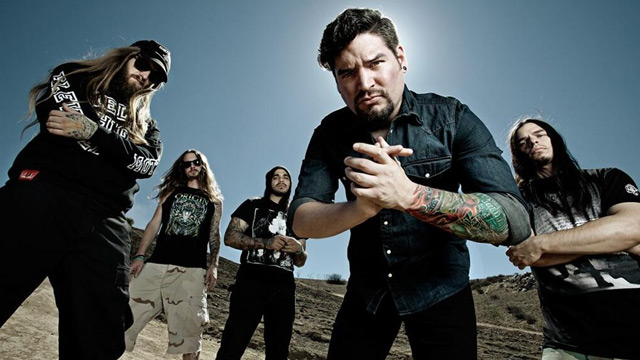 After tragedy struck in 2012 when Suicide Silence frontman Mitch Lucker died in a motorcycle accident, the California metal band took a year to regroup, named a new vocalist in the form of All Shall Perish frontman Eddie Hermida, and put out a new record, You Can't Stop Me, released this July. You Can't Stop Me became the band's highest-charting album to date, and this summer finds the band in the midst of the summer-long Mayhem Fest. We sat down with Hermida and lead guitarist Mark Heylmun at the tour's St. Louis stop and talked about what they listened to in eighth grade, why Dimebag Darrell is the best, and the magic of lucid dreams.

AllMusic: Is there a song you think you've heard more than any other?

Mark Heylmun: “Walk” by Pantera. “Walk” is just everywhere. I knew “Walk” before I even knew Pantera, everything about “Walk” taught me about what that band is, I never even knew about a C-sharp tuning, I learned things from that song.

AllMusic: Especially growing up in Texas, I heard that song all the time. It's not Pantera's most complicated song, but it's their most popular.

Eddie Hermida: I think it’s because it gives it a bit of relatability, that’s what makes these songs stick in your head and make it seem like they get played all the time, it’s because you stick them to a certain memory and they stick with you forever. The more technical songs are probably my favorite. “Walk” isn't my favorite Pantera song by any means, but you put it on and I’m going to get just as pumped as I did the first time I heard it.

MH: The only reason it’s not my favorite Pantera song of all time is because I've heard it so many times. I think that the simpler things are harder to write, you have to write simple things that are really hard to get out of your head, and “Walk” is the king of that, it’s the king numbskull riff, and that’s my favorite shit about Dimebag. All my favorite riffs by him, I call them “numbskull riffs,” like the chorus to “The Great Southern Trendkill.” That’s the simplest, easiest way to make something sound badass and stick in your head, and that’s what “Walk” is.

MH: Eighth grade, I was at my absolute peak of my obsession with Ozzy and Metallica, that was my peak, I would play Master of Puppets in my room every single day, all the way through, and touch on every album and learn something random every day on guitar.

EH: I went to a continuation middle school, and nobody listened to heavy rock or rock and roll, so the only rock I listened to on my own was stuff off the radio. It was always Alice in Chains, that was my favorite band at the time, and they’re still one of my favorites. It was Bone Thugs-N-Harmony, if you asked for my favorite. I was learning the lyrics, and they put music into their flow, like they were singing but they were also rappers. At the time I hated rappers, because I thought rappers were so monotone, and they didn't express how their voices worked.

MH: Bone Thugs is like the Temptations and Grandmaster Flash.

AllMusic: You're a metal band, but you don't listen to metal all the time on your bus.

MH: We have a thing called power hour, that’s the time when we listen to metal, in the hour before we play our set.

EH: I put on Portishead a lot, and it calms all my senses. Dummy, it’s flawless, it’s so good. And that’s the only one I've ever listened to of theirs, and I've listened to it for a lot of years. I've also been getting into Devo, I heard some old Devo records, because the only songs I’d heard by Devo were the hits, and then I found out they were punk rock and out of their minds.

AllMusic: Especially when you're on tour, do you have dreams about music and being on tour?

EH: Before coming on tour with Suicide Silence I’d have a recurring dream where we’d be in this thousand cap venue and the show’s about to start, and there’s a bunch of cameras and it’s a high profile show. It's like in a dream where you can’t find the door that leads you where you need to go, I kept not being able to get to the stage, and if I was close, then there would be people that would surround me and keep me from getting there. I was very nervous about coming on tour and everything, and I kept having that dream over and over. You have to wake up and you laugh from those, because you’re scared as fuck.

MH: Most of the time, I realize it when I have this reoccurring dream. I always realize I’m dreaming. “Something’s wrong about this bus, something’s wrong about this day sheet,” and I realize I’m dreaming. Once for an entire tour, I had this same dream, I remember getting off the bus, seeing what kind of world I was in, and I was in this giant construction area, and there were giant earth movers. I’d run onto the bus and tell everybody, “Dude, come on, let’s go steal these earth movers!” Or other times it wouldn't become lucid and my whole day would go through, and I’d walk offstage and see our tour manager sitting Indian style on the ground and I’d say, “This isn't right, what’s happening, oh, I’m dreaming right now.” Reoccurring dreams on tour are the worst, all you want is a good night’s sleep, and if you have a weird reoccurring dream, it feels like you didn't even rest. For the most part I smoke way too much weed to even remember any dream I have.