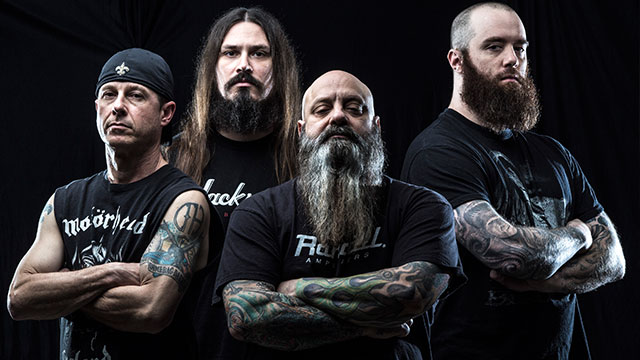 Since their 1992 debut album, Crowbar has been one of the defining bands of a low and slow style of heavy metal that didn't have a name at the time, but has grown to be affectionately called "sludge metal." Crowbar has worked its way through numerous lineups over its generation-spanning career, but founder and frontman Kirk Windstein has remained at the band's center, even while pulling double duty as guitarist for New Orleans sludge supergroup Down. Windstein departed Down last year to focus on Crowbar's 25th anniversary and the band's 10th album, Symmetry in Black, out this week on eOne Music.

We called up Windstein–woke him up, too–to talk about the new album, how he takes inspiration from a superstar former bandmate, and the album that was so important to him as a kid that he stole money from his sister to go buy it.

AllMusic: Crowbar has been around for 25 years, and sludge and doom metal are now established genres with devout followings. Were there naysayers in the early days?

Kirk Windstein: Me and Jimmy Bower [of Eyehategod and Down], Crowbar was our vision, and we just tried to do something different. Of course there were naysayers, and it took a long time to even get to where we’re at now, but it’s been well worth the wait, to get where we are at now with Crowbar. It’s been a long, hard road. When Crowbar came out, when Eyehategod came out, because they started around the same time, there was no genre for us to fit into, we didn't sound like anybody else and we still don’t sound like anybody else. Somebody might sound like us, but we don’t sound like anybody else. We wanted to be originators, not imitators, with Crowbar. Me and Jim were at a point where we were playing almost thrash metal, and I looked at him and he looked at me and he said, “Wait a minute now, we’re listening to the Melvins and Carnivore and Black Sabbath and Trouble, let’s just do something like that,” so that’s the path we took.

AllMusic: "Walk With Knowledge Wisely" is a strong opener; what let you know that song should lead off the album?

KW: There’s always a song in my head, and right now I’m humming it, I have “Walk With Knowledge Wisely” in my head. That’s probably the reason we chose it, it encompasses everything that Crowbar is. Looking at all of the Crowbar songs 25 years later, I think it’s a perfect example of what we are, who we are, and the way we sound today.

AllMusic: In the '90s did you feel a kinship with any of the bands out west, like Sleep or Kyuss, who were also doing slow or groove-oriented material?

KW: We were more in line with the Melvins, as far as that went. I believe Sleep were originally called Asbestosdeath or something, but they were out there. The bands that were doing what we were doing in 1989 were Cathedral, a band out of New York called Winter, the Melvins, and Carnivore with Retaliation, which is one of my favorite records of all time. That was a huge influence on Crowbar, I felt Pete’s lyrics were brilliant. The Melvins and Peter Steele, to us, were gods, they did something that no one else did.

AllMusic: My favorite track on the new record is "The Taste of Dying," especially the interplay between the vocals and guitars in the chorus.

KW: I stole that idea. I wrote the riff, and unbeknownst to me, it’s apparently in 7/8 time, which to me is just 4/4. I said, “Where do the vocals come in, I want to make the vocals go against the grain on everything.” That’s probably something I stole from Philip [Anselmo], like the Pantera phrasing or something. So I guess I stole from Phil—not that I steal too much, too often—but occasionally, like he says, "It’s good to be the king." To me, even though I’m not in [Down], he’s still the best frontman and the best lead singer for any metal band, so I had the pleasure, the honor, of jamming side by side with him for 22 years, and so here and there I steal a little something from him. To me, “The Taste of Dying” was one of those, like [Pantera's] “Primal Concrete Sledge.”

I didn't set out to do it intentionally, but it’s something that Phil would have done, and I’m not too proud to admit that I got that idea from him.

AllMusic: Do you think there's a song that you've heard in your life more than any other?

KW: It would have to be “Deuce” off of Kiss' Alive! The first live Kiss record is my favorite record of all time, with Motörhead’s No Sleep 'til Hammersmith running a close second. Of all the songs, to show my age, putting the needle down on a copy of Alive! and hearing, “You wanted the best, and you got it, the hottest band in the land, Kiss!” I've heard that probably more than any other song.

AllMusic: Do you remember going to buy it for the first time?

KW: I’m 49 years old, I was born in 1965, so I was 10 in 1975. A dude brought a picture of Kiss to school when I was in sixth grade or whatever, and Destroyer had just come out, and I heard “Beth” on the radio. I heard Destroyer first, and I got five dollars a week allowance, and with tax, if you bought an album—and that’s how I built my album collection, every week—I took my five dollars allowance, got on my bicycle and rode to Barker’s, and with that five bucks, it was $4.53 with tax. I went and said, “OK, I have Destroyer, I want Alive!” I was only getting five dollars a week in allowance, but it was $7.10 for the double album. So I hid the LP, the double gatefold Kiss Alive! in between some Peter Pan records, I just had to get it out of the rock and roll area of the store, and I got on my bicycle and raced home with the five dollars still in my wallet, I stole change out of my sister’s purse, and I came back with the $7.10 and I bought Kiss Alive!, and my life hasn't been the same.

It’s holy ground for people like me, it really is. Pepper [Keenan, of Down and Corrosion of Conformity] was more into punk, but if you talk to me, Philip, even Jimmy, probably, we remember where we were at when we bought our first Kiss records. I got Destroyer first, but I had to have a live one, and when I tell you I wore out every groove on the vinyl, I’m not lying. I brought bought that record 10, 20 times, so no wonder Gene Simmons is a zillionaire. I've bought it on vinyl, CD, whatever. I’ll be on tour and say, “We need Kiss' Alive!,” and I’ll go get it. I’m responsible for about 10 of the five million copies.

Enter to Win 'Quadrophenia: Live in London,' the New Concert Film from The W ...

Enter to Win 'Quadrophenia: Live in London,' the New Concert Film from The W ...