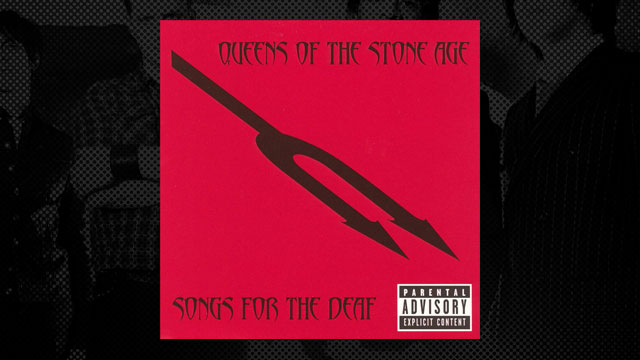 We're headed to the Sasquatch! Music Festival in Washington state this weekend, and thought it would be fun to build up to the event by going in depth on a pair of five-star albums from some of the artists on the bill. We're starting with Queens of the Stone Age's 2002 desert classic, 'Songs for the Deaf.' If you want to do some five-star searching of your own, be sure to check out our advanced search feature, which lets you narrow down your search results by genre, date range, star rating, and more.

Any album that opens with a key turning in the ignition, an engine firing up and a slamming car door—in that succession, which always seemed out of order—is destined to be a driving album from the outset, and Songs for the Deaf had no illusions of being anything else. And a minute later when the first song kicks in, after the first burst of DJ chatter that flows throughout the album, you'd better be on the freeway already, because "You Think I Ain't Worth a Dollar, But I Feel Like a Millionaire" is one of the most propulsive opening tracks on any album, full stop. The guitar tone in this live version is even nastier than the one on the record, and the false ending still comes as a surprise over a decade later.

"Propulsive" and all of its synonyms come into play on Songs for the Deaf, which is concerned with momentum for its entire running time, and is something that the band has gradually moved away from on its subsequent albums, possibly due to the departure of bassist Nick Oliveri and his punk rock energy, or perhaps a result of "been there, done that" fatigue and interest in trying other things. "No One Knows" was the smash hit that changed the band's audience practically overnight from small rooms of Kyuss worshipers who followed QOTSA frontman Josh Homme from his previous band to full on mainstream success. The presence of Dave Grohl on drums in the song's video certainly didn't hurt, although I can remember several kids in the line at a 2003 Queens show who were let down to learn that Grohl had been replaced in the live lineup by the wholly capable Joey Castillo. As catchy and bouncy as it is, "No One Knows" is a real bastard to play on guitar, so it's not like the song was dumbed down in a bid for radio success.

This success brought a fresh set of ears to the band, and meant that a whole new audience was introduced to former Screaming Trees frontman Mark Lanegan, who had also contributed to Rated R and would serve as an unofficial member going forward. He sings on four tracks: "Song for the Deaf" and "Song for the Dead," both driven by Grohl's alternately hypnotic and pummeling drum work, the shuffling "God is in the Radio," and "Hangin' Tree," which might be the album's weakest track. In this video, Lanegan teams up with Oliveri for an acoustic version of "Another Love Song," which, along with "Auto Pilot" from Rated R, shows off Oliveri's sensitive, earnest delivery, miles away from when he's screaming his head off.

Songs for the Deaf often found its success in simplicity, particularly on the 4/4 stomp of "Do It Again," which features some of Homme's best vocals on the entire album, as well as on the second single, "Go With the Flow," which immediately hurdles headlong into a relentless three-chord chug, punctuated with seemingly improvised but probably carefully orchestrated bursts of ringing lead guitar. The song's video, rendered almost entirely in the album's red and black color scheme, is consistently mesmerizing, but short enough that the red-eyed didn't have to put their bongs down. It's no surprise that the song is still a mainstay of the band's live set.

Even if you've never driven white-knuckled through the High Desert, the careening momentum of Songs for the Deaf still works. Queens of the Stone Age would continue to revolve its lineup on subsequent releases, most notably when Oliveri was booted under vague circumstances before Lullabies to Paralyze, and Castillo departed before last year's ...Like Clockwork. Homme started a family, formed Them Crooked Vultures with longtime pal Dave Grohl and Led Zeppelin's John Paul Jones, had a brush with death following surgery complications, and closed out the Grammys alongside Nine Inch Nails and Lindsey Buckingham. None of the QOTSA releases that followed have attempted to recapture the unbridled drive of Songs for the Deaf, which is probably for the best.

AllMusic editor Chris Steffen adjusted his guitar-playing posture after seeing Queens of the Stone Age for the first time.