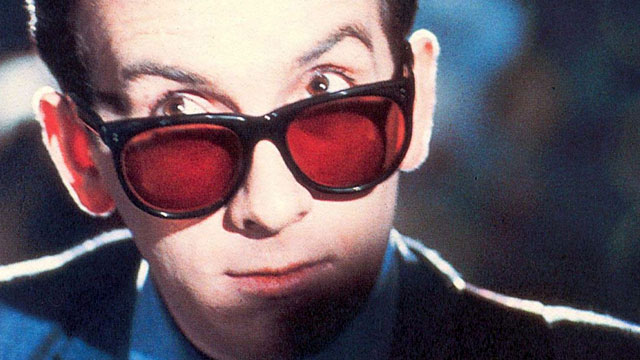 In Five Star Spotlight, we root around in our archives to dust off and dig into albums upon which our reviewers have bestowed the coveted five-star rating. We'll cobble together some live videos from the era, maybe some rehearsal or demo recordings, and generally pontificate on what makes the album special. If you want to do some searching of your own, be sure to check out our advanced search feature, which lets you narrow down your search results by genre, date range, star rating, and more.

David Lee Roth is quoted to have said, "Music journalists like Elvis Costello because music journalists look like Elvis Costello." It's true that the bespectacled Englishman has become something of a patron saint for rock and roll nerds, but that doesn't mean some of us don't love Diamond Dave just as much. But we already gave Van Halen their due, and so today, on Elvis Costello's 60th birthday, we're going to take a closer look at one of this finest recordings, 1981's Trust.

Costello's fifth album, Trust was a turning point in his career, especially on the heels of Get Happy!!, where he crammed 10 songs onto each side of the LP and kept 14 of them at or under the 2:30 mark. Only four of the 14 songs on Trust fall beneath that threshold, and while it wasn't like he turned prog, the tonal shift is evident. Even the back jacket of the album, which showed Costello as the frontman of a Tommy Dorsey-style big band, suggested that this wasn't the same knock-kneed young man spewing fury and regret. Speed is mostly out the window on Trust, although it's not completely absent, especially on the Bo Diddley-esque shuffle of "Lovers' Walk" or "From a Whisper to a Scream," which features guest spots from Squeeze frontman Glenn Tilbrook and Rumour guitarist Martin Belmont, who was at that point part of Trust producer Nick Lowe's band.

The album might be bereft of any songs on the iconic scale of "Alison," "Pump it Up" or "Radio, Radio," although many of their songs would get their due in the live arena. In this clip from last year, he stretches out a solo acoustic version of "White Knuckles" into five minutes.

Many of the songs on Trust pound with a 4/4 stomp, swathed in keyboards, drums and guitars, but some of the album's most satisfying moments come when the instrument formula is mixed up, like on the vocal and piano-only track "Shot With His Own Gun," punctuated by jarring dissonant jazz chords that contrast with the semi-flamboyant main line that seem as far from the bounce of This Year's Model as Costello is capable.

We'll close with this live version of "Big Sister's Clothes," the closing track from the album, which is without drums (save for a tambourine that comes in halfway through), so this full-band, harder-rocking version is an interesting twist on the more somber incarnation of the song. Also amusing is Costello's outfit, which is a bit of a jump from from his famous shirt and tie look.

Costello has stayed very active as the decades passed, recently leaning on collaborative efforts, like last year's album with the Roots, Wise Up Ghost and Other Songs, or with Allen Toussaint in 2006 on the Hurricane Katrina-inspired The River in Reverse, and co-writing songs with his wife, Diana Krall, on her 2004 album The Girl in the Other Room. He also made a delightful appearance on the season three finale of 30 Rock, in which his true identity and crimes were revealed.