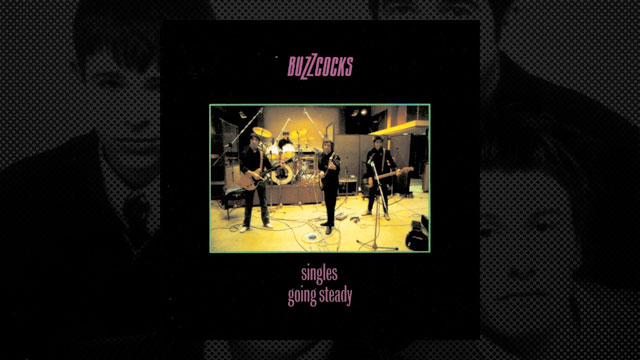 Welcome to the first edition of Five Star Spotlight, in which we root around in our archives to dust off and dig into albums upon which our reviewers have bestowed the coveted five-star rating. We'll cobble together some live videos from the era, maybe some rehearsal or demo recordings, and generally pontificate on what makes the album special. If you want to do some searching of your own, be sure to check out our advanced search feature, which lets you narrow down your search results by genre, date range, star rating, and more.

For our inaugural entry in this feature, since it's Buzzcocks frontman Pete Shelley's birthday, we're going to take a look at the British punk band's 1979 compilation album, Singles Going Steady. Initially a U.S.-only release meant to provide primarily non-album tracks, Singles Going Steady was later reissued in other countries after the band's 1981 demise and ended up becoming the Buzzcocks' defining musical document on the strength of its 16 wildly charming songs, from the snotty and hilarious "Orgasm Addict" to the utterly timeless "Ever Fallen in Love?"

This early demo of that classic song shows the band still finding the sense of urgency in the track - the breakneck pace that charges the song forward would come later. But its emotional weight - buoyed by the harmonies and rising vocals in the undeniable chorus - is already fully intact, and its perfection is cemented by the way the song's brevity and economy invariably leaves the listener wanting to hear the track again immediately.

The tracks that make up Singles Going Steady were recorded in a year-and-a-half span from late 1977 to mid 1979, and four were previously available on the band's full-length albums. Frontman Pete Shelley shows up a songwriter on every song, save for a pair of tracks written by guitarist Steve Diggle. Diggle takes the microphone on his song "Harmony in My Head," and delivers the song in a voice slightly more in line with the sneering punk howlers of the time - the one Fred Armisen uses when doing a parody of seventies British punk - while the tracks sung by Shelley show off a keenly earnest and yearning sense of emotion.

A highlight for many listeners was the album's penultimate track, "Why Can't I Touch It?," the longest song on the record at six-and-a-half minutes, and the only song that credits every member of the band as a writer. It's also in line with the band's affinity for asking questions in song titles, with the track's name repeating ad nauseam in the drawn-out chorus, particularly the word "why," which is extended to seven syllables. The guitars and bass interact from separate channels in a fun bit of studio trickery, as chiming upper-register guitar doodles clash with distorted chords and the bass locks into a repetitive but not easily-ignored groove.

Or, on the other end of the spectrum, there's "Oh Shit."

What's your favorite song on Singles Going Steady? Let us know in the comments, and drop a suggestion for other albums you'd be interested in reading more about in upcoming editions of Five Star Spotlight.