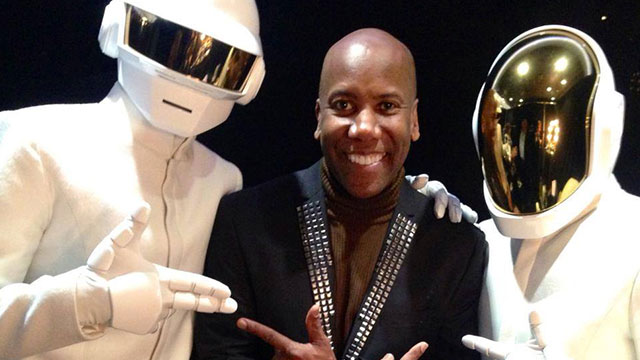 When we spoke with bassist Nathan East in June about his solo record and debuted a music video from the project, we intended to ask him about some of the items on his musical resumé, but once we saw the mile-long list of credits on some of the biggest songs with some of the biggest artists of the past 30 years, we knew this would take more than one conversation.

So going forward, we're going to chat with East once a month to get the stories behind some of his biggest songs, featuring artists like Phil Collins, Eric Clapton, Kenny Loggins, Michael Jackson, Whitney Houston, and many more. We're starting with his most recent smash, Daft Punk's "Get Lucky," which earned Record of the Year honors at this year's Grammys, propelling Random Access Memories and Daft Punk to five wins in total. He'll also be offering a glimpse into the life of an in-demand session player, hopping from studio to studio with some of the top names in the business and playing shows on various continents.

AllMusic: Before we dive into "Get Lucky," whom have you been recording and playing with since we last talked?

Nathan East: I was doing a session with Idina Menzel, she’s doing a Christmas album with Walter A., who’s producing it, and so that was fun, because Vinnie Colaiuta and ["Get Lucky" session guitarist] Paul Jackson Jr. were on the session, and it’s great to be working with those guys again. I've been doing some stuff with David Foster, the new Diana Krall record, then Fourplay [East's fusion band] is about to go to Japan, and then I’m going to go out and promote my record. I also worked on an India.Arie Christmas record and a Motown Christmas record that’s going to have multiple artists, like Smokey Robinson and people like that.

AllMusic: When did you first hear "Get Lucky"?

East: It was part of multiple tracks that we recorded at the first batch of sessions in L.A., and the song apparently had been in the works for a couple of years. It didn't have a name when we recorded it the first time, and then they went back and put Nile Rodgers on it and came back around six months later and called me to the studio and played the tracks and we did a couple of other songs, but we re-cut the bass on “Get Lucky,” only because it was a different feeling now that it had Nile Rodgers and Paul Jackson Jr.; the song had gone to another level. My mission was to match the bass part with what was going on in the guitars and everything.

AllMusic: Who was on the track in that first session?

East: It was basically an instrumental track, as a lot of things were at that point, there was no Pharrell, no Nile, and the band, for those sessions, was me, Paul Jackson Jr., [drummer] John Robinson, and [keyboardist] Chris Caswell, we recorded at Conway Studios in L.A., and we probably tracked eight or nine songs that week.

AllMusic: And Daft Punk was there, or were they monitoring the session remotely?

East: They were there every day.

AllMusic: How much did you know about them before getting called in to work with them?

East: I knew about them, and I’d just watched Tron, and I think they scored that, so I was intrigued with the music as much as the film, so I thought it was interesting to get a call from them right after that. I was pleasantly surprised, because their stuff is so electronic and synth-based, that it was exciting to get the call from the guys. We were all in the studio every day, they’re very hands-on and their work ethic is very high. They’re perfectionists, needless to say.

AllMusic: After hearing that music, were you surprised at the sound and style of "Get Lucky"?

East: I was really surprised, and I was happy that they made a conscious effort to go back and really honor that era with the guys, like Nile Rodgers and Chic, they owned that era. To be honest, I was doing my Bernard Edwards impersonation, trying to add the Chic vibe to it, as well.

AllMusic: You've played on tons of hits, were you able to tell that this was one right away?

East: This one, you could definitely tell that there was something special, because everybody in the room was smiling. There was a vibe of, “This is very cool,” and there was a lot of playing it over and over again, because of that combination of elements. It’s a huge credit to Nile’s guitar, to Nile and Paul Jackson Jr., to have those two guys on the track together, two of the funkiest guys ever. Usually I do a lot of sessions and go on to the next, but I remember saying when we were done, “Please make me a mix of this, I want to go home with this one.”

AllMusic: Are there some in your career that you were surprised ended up being hits?

East: You can’t always tell. For instance, “Change the World,” in the studio, I remember thinking, “This is great,” but it’s basically blues changes, so I didn't know the thing was going to be Song of the Year and all that. The thing that happens more is I’m in the studio and I really like a song and I think it’s going to be huge and then you never hear it after that. But “Get Lucky” far exceeded anything I would have expected.

AllMusic: Is Daft Punk all business in the studio or was there any goofing off?

East: It was mostly business, but there was a lot of fun going on in the studio, they know all of our histories and who we've played with, so they’re very respectful. The tape machine would run, the Pro Tools would run, and we’d go for ideas. It’s fun if you come up with something that they like, you can see it in their body language, they’re kind of dancing, and you say, “OK, let’s focus on that.”

They're very much like professors in a music factory, there’s just loads of gear, equipment, retro synthesizers—you go in there and it looks like a museum. All the stuff that has been used to make music over the years, they have studied that, and there’s everything from the speakers and the engineer, Mick Guzauski, probably one of my all-time favorite engineers, the sounds are amazing, the music’s great, and it’s like a scientific environment, where there’s a lot of creativity and experimenting going on. When we cut the first batch they had been planning to go in with an orchestra the following week, so I was thinking, “Their budget must be pretty big.” It’s nice to see that kind of success, but the guys are actually worthy of it because they know what they want and they know how to get it.

AllMusic: Electronic music had grown much more popular since their last record, was it a spoken goal to try and do something different?

East: In this particular case, I think there was a conscious effort to get away from that and really go to the players’ standpoint, so it ended up being a players’ record. It was definitely discussed that this one was to be retro, live-feeling, very funky and a departure from the electronic thing that everybody expects from them.

AllMusic: They haven't toured on the album, was that ever a discussion?

East: There’s always a bit of a discussion about, “Hey, if we take this on the road, are you guys around, would you be interested,” and I think it was so much fun that everybody would have said, “Yes,” if there was some kind of touring situation. I've been seeing a couple of blurbs where they had a tour planned, then it was off, then on again, and so I’m not sure what the status is of that. I know for the Grammys, that’s one way to hit everybody in one go if you’re going to perform one time, it may as well be there. When I go back and watch the video from the Grammys, I look at their body language and there’s a couple of times when it looks like they’re just standing there checking everybody out, going, “Wow.” I saw them a few times in the rehearsal and they’re just looking at Stevie going, “Man, really?”


AllMusic: What's the vibe like with them backstage before a performance? Do they change personas once they put their gear on?

East: It’s fun hanging out in the dressing room with the guys, there’s the masks, and I love that whole persona and mystique that they have going on, I think that’s a brilliant move. The fun thing is they were showing me some videos and some pictures from their tour, and they can play in Paris for 45,000 people, and then immediately after they’re walking down the street with the audience and nobody knows who they are. But when the gear is on, it’s go time. Security is crazy, because everybody that sees them wants to get a piece, they want a picture, so it has to be a pretty tight, secure situation.

AllMusic: Did you get to put on a helmet?

East: I wanted to, but they keep those pretty tight.

AllMusic: Most of the artists you play with are rock, jazz and R&B acts. Do you notice any antipathy from your generation of more traditional studio players in regards to electronic music? Is there an old guard huffing and puffing about "authenticity"?

East: I don’t think so. Anyone who’s been around for any amount of time realizes that things change, and we don’t want to sound like our parents who said, “Back in my day, it was dance music and Tommy Dorsey, that was real music,” and then that generation was looking at the Beatles saying, “What is this crap these guys are playing,” and then there was disco and punk. So I think anybody that’s going to sit there and complain, it’s ridiculous. What I do like and what I think is great about a song like “Get Lucky” is that it gave us a full circle moment about quote-unquote real music and quote-unquote real musicians that aren't just pressing a button, and I think that probably did generate a lot of work for musicians that are playing. I love it all, I think we’d be bored if there was only one kind of music we were hearing, and sometimes I get frustrated because there’s only those same four, six songs that get played in the mainstream, so it’s always a challenge to keep it going.