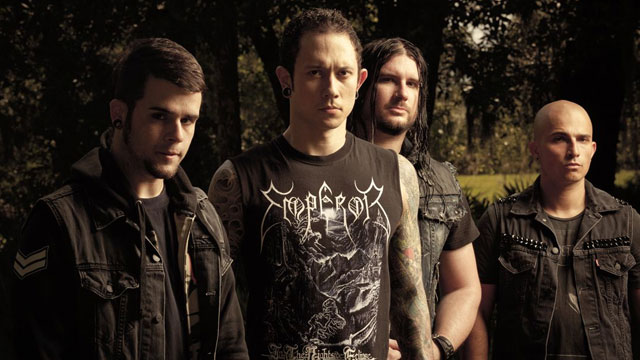 Editor's note: Black metal is notoriously a difficult genre of music to decipher for newcomers, and In the Nightside Eclipse by Norway's Emperor is one of the best examples of the style at its finest. The five-star album turned 20 this month, and Emperor is celebrating the anniversary with a series of performances of the album at several European festivals this summer. In the Nightside Eclipse has cast its spell on countless metal fans over the years, including Matthew Kiichi Heafy, frontman of the American metal band Trivium. He wrote the following piece to celebrate one of his favorite albums and to examine its significance, influence and longevity.

In The Nightside Eclipse is an album unbridled by time, immeasurable in scope, and boundless in inspiration. From its inception 20 years ago to today, it is a record upon which a completely unique body of work is evident.

Black metal was the answer, the rebellion, to the complacency that its forefathers saw in the metal music of the moment. Overall, metal itself was a reaction to what everything not metal was doing, and black metal took that concept even further. Its amalgamation of key ingredients - combining the influence of early thrash metal with Swedish and Norwegian folk musicality, and drawing thematic inspiration from Satanism and the occult - was something constructed in its early days. The rasping, screechy vocals found in black metal - one of the style's defining traits - have their roots in the Norse mythological concept of the Oskorei, ghost horsemen said to fly through the sky shrieking in high-pitched tones. But with the establishment of hard and fast set rules, black metal had inadvertently created its own status quo, seemingly ideologically in conflict with its founding principle of breaking from any form of normalcy.

When In The Nightside Eclipse surfaced in 1994, Emperor introduced several elements not found in black metal at the time. The album highlighted the sonic juxtaposition of brutality and beautiful melody, as Emperor utilized more of a classical music inspiration. Additionally, the visuals and the artwork of the record heavily featured hues of blue instead of the genre's typical stark black and white imagery, which was rarely deviated from at the time. Lyrically, Emperor frontman Ihsahn effectively painted the world he conjured for the listener. It's easy to picture the realms of icy desolation and portraits of mystery and woe that he evoked with his signature scream. Emperor had crafted a unique sound in its combination of the classical with modern metal conventions that had not been executed with such precision before.

In particular, the album's closing tracks, "I Am the Black Wizards" and "Inno a Satana,” embody the best of Nightside. The two have instantly recognizable hooks in the guitar lines - a tricky feat to accomplish in a genre of such fast playing and atonality - while keyboards add an ethereal quality. "Inno a Satana" features operatic clean vocals layered with cathartic screams in its jaw-dropping climax, all built on the backbone of a mid-paced groove. These two tracks are the absolute peak of the record, bringing it to a close with the its most epic and cinematic creations. The use of varied tempos, intricate song structure, and the implementation of melody and atonality simultaneously come together to create often juxtaposing and always exhilarating angles within a single song.

The advancements made on Nightside would foreshadow what Ihsahn would consistently achieve in his musical career moving forward. With each record, new elements would spring forth, building and building until Emperor hit an all-time musical high point with Prometheus: The Discipline Of Fire And Demise, disbanding shortly thereafter. Following Emperor's split, he released several fantastic solo records, and the latest two, Eremita and Das Seelenbrechen, further Ihsahn's predilection for embracing the unexpected and reinventing oneself. On these albums, you see again the imprint of the musical and intellectual template of Nightside: an evolution built on coupling something familiar with the unexpected and turning it into something entirely new.


Matthew Kiichi Heafy is the frontman of the band Trivium, which he formed in 2000. They released their sixth album, Vengeance Falls, in 2013.