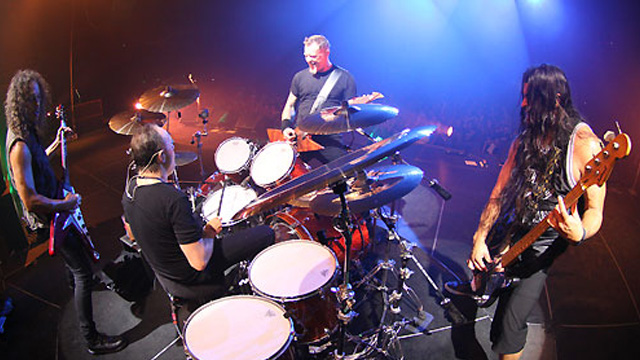 After a jaunt to Antarctica, Metallica is back in its Bay Area studio working on its tenth studio album, and as is Metallica tradition, no recording session is left uninterrupted by the band’s juggernaut touring machine. The next batch of dates includes South America and a handful of European festivals, this time with the gimmick of letting fans vote to choose the setlists for each show (only once they’ve purchased tickets, naturally). The band has made the live voting results available, and instead of the potentially chaotic hodgepodge of deep cuts and covers, the voters are sticking with the songs they’d probably get if they let the band write the sets anyway; “Master of Puppets,” "One," "Enter Sandman," and “Seek and Destroy” all feature prominently, although apparently a devoted core of fans in Germany still really wants to hear “St. Anger.”

This may indicate that Metallica’s sets are truly already built around fan favorites and that your average listener isn’t that hard-up to finally hear “The Frayed Ends of Sanity” or “Fixxxer” performed live, but that doesn’t mean it’s not fun to play fantasy manager and cobble together a setlist comprising some of the band’s lesser-played songs, a smattering of covers, and one or two standbys for tradition’s sake. As per the band’s request, we’ve kept our setlist to 18 tracks, clocking in at just under two hours - actually a bit brief by Metallica standards, but James Hetfield's stage banter should help pad it out a bit. There’s a song from every studio album save Reload, feel free to imagine the original vocalists guesting on the cover tunes, and for the sake of momentum, the encore begins with “Damage, Inc.” A few of the more over-played standards have been left out to shake up the formula, and because “For Whom the Bell Tolls” needs a rest, if just for one night.


Open playlist in a new window


Chris Steffen is the newest member of the AllMusic team. He turned down an invitation to sing for Metallica in June of last year.