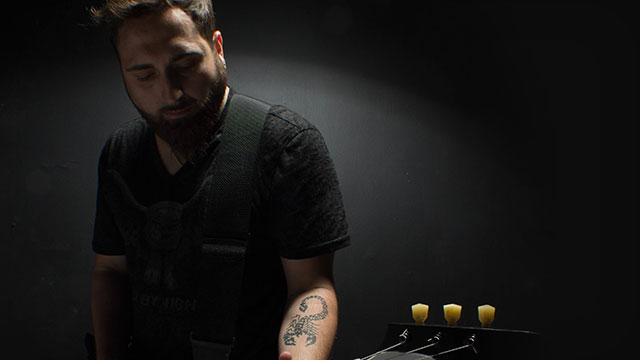 From guitar teacher to performing on the world's biggest stages, Monte Pittman's life has been a whirlwind since 2001. One of the students he taught a C7sus4 chord to was filmmaker Guy Ritchie, who introduced him to his girlfriend at the time, Madonna. Pittman became her teacher as well and went on to join her band, performing on all of her albums and tours since, including her Super Bowl XLVI halftime performance in 2012.

Not just a pop performer, Pittman has also been a member of the alternative metal band Prong and made several solo albums, including The Power of Three, released earlier this year. Noteworthy for hard rock and metal fans, The Power of Three was produced by Flemming Rasmussen, best known as the man behind the desk for three of Metallica's classic 80s albums: Ride the Lighting, Master of Puppets and ...And Justice for All. Pittman's own taste for hard rock even crept into Madonna's performances after she became infatuated with the main riff from "A New Level" by Pantera, which Pittman had taught her as part of an exercise, and incorporated it into an onstage jam following her song "Hung Up."

Pittman stopped by our studio to tell us more about the new record, discuss the dichotomy between his work in the worlds of pop and hard rock, and to perform an acoustic version of his song "End of the World."

AllMusic Playlist: Madonna, Before and After

AllMusic Playlist: Madonna, Before and After