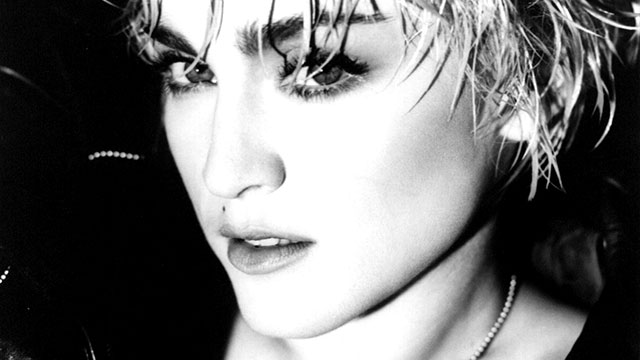 We had a lot of fun thinking about who shaped the Daft Punk sound and whose sound Daft Punk shaped, as documented in our Daft Punk, Before and After playlist. In that spirit, and in the spirit of her birthday earlier this month, this time we turn toward pop superstar and cultural icon Madonna. Check out our editors' picks in blurb and video form below, from sounds that we think influenced her club roots, to the generation of fun, free-spirited and empowered female singers who couldn't have come to be in a world without her, then subscribe to the playlist on Spotify -- and keep the music playing by sharing your favorite songs by artists who inspired, or were inspired by, Madonna (more on that at the end of this post).

Donna Summer - “Bad Girls”
A trained dancer and inveterate club-kid, Madonna’s early sound was rooted in the dance music of such ‘80s NYC hotspots as Danceteria and Pyramid Club. Just listen to her 1983 debut self-titled album and you can’t help but pick up on the ‘70s disco influence of divas like Donna Summer. In fact, Summer’s 1979 anthem “Bad Girls” essentially works as a prototype for such Madonna singles as “Everybody” and “Burning Up.” - Matt Collar


Stephanie Mills - “Never Knew Love Like This Before”
"Borderline" has much in common with this, the 1981Grammy Award winner for Best R&B Song. Mills' single was produced by James Mtume and Reggie Lucas, giants who were at the forefront of progressive jazz prior to writing and producing for Roberta Flack, Phyllis Hyman, and Mills. One of six Lucas-produced songs on Madonna's debut album, "Borderline" begins with a Dean Gant keyboard intro similar to that of Mills' hit, and from there, the likeness is unmistakable, from structure to additional personnel -- including some of the background vocalists, such as Gwen Guthrie, who released her own version of "Never" in 1990. - Andy Kellman


Northend - “Happy Days”
One of many underground post-disco classics released on New York's Emergency label -- home of Kano’s “I’m Ready,” Xena’s “On the Upside,” Electra’s “Feels Good,” and Shannon’s “Let the Music Play” -- "Happy Days" was co-produced by Arthur Baker and was a big record at the FunHouse, where DJ Jellybean Benitez spun and Madonna hung out. Shortly after the track’s release, Benitez and Madonna, aided by songwriting from Pure Energy's Curtis Hudson and Lisa Stevens, made "Holiday." The musical and thematic similarity between the two songs is obvious within a matter of seconds. - AK


Regina - “Baby Love”
On the surface, this 1986 single is the most flagrant Madonna knock-off recorded. It was intended for her, co-written by onetime bandmate Stephen Bray -- a songwriter, producer, and multi-instrumentalist partly responsible for a lot of her '84-'90 output. Madonna recorded a demo of the song but declined and left it to Bray, who took it to sound-alike Regina. It debuted on the Hot 100 a couple weeks prior to "Papa Don't Preach" and eventually reached number 10 on the Hot 100. In the background, you can hear the voice of Evan Rogers, who would later discover another first-name-only superstar: Rihanna. - AK


Breakfast Club - “Right On Track”
Like Regina, the '80s band Breakfast Club are another act touched by the hand of onetime bandmate/future Madonna collaborator Stephen Bray. The Ciccone connection doesn't stop there, as lead vocalist Dan Gilroy is a Madonna ex-boyfriend -- and with Bray writing, drumming, and producing, plus Jellybean Benitez handling the remixes, the Breakfast Club are to Madge as the Time are to Prince. Check their 1986, Top 10 single "Right On Track" for proof, then look around for their earlier, ZE Records single "Rico Mambo" and dig the sound of the funky '80s underground. - David Jeffries


Kylie Minogue - “What Do I Have to Do”
Although they started their careers around the same time, Aussie pop diva Kylie Minogue has always displayed a strong Madonna influence -- something she’s readily admitted to in interviews. However, if Madonna is the Queen of Pop, then Kylie is certainly the International Pop Princess. Though never as controversial as Madge, Minogue still revels in playing up her strong female persona, club music sound, and love of dance. All of this is on display in the video for her 1991 single, “What Do I Have to Do,” which also bears a striking similarity to Madonna’s “Express Yourself.” - MC
https://www.youtube.com/watch?v=q53e-IWTSTc

Annie - “Chewing Gum”
The thing I liked best about early Madonna was that she could be ridiculously fun and sassy. Sadly, it’s hard to remember that when she hasn’t been fun (or even pleasant) for almost two decades now. Luckily, other artists have cracked the code and managed to delve into the fun + sassy = gold formula that Maddie invented and discarded, like Annie. “Chewing Gum” is one of the bounciest, most smile-inducing put-downs of a loser BF you’ll ever hear, and it really makes you long for the days when Madonna had a bit of a sense of humor. Sure, she always seemed to be working ever so hard, but it was there. Anyway, this Annie song is only one of many Annie songs that update (and improve) on the early
Madonna style. - Tim Sendra


Jessica Simpson - "A Public Affair"
Speaking of working too hard, no one would ever accuse Jessica Simpson of doing that where her musical career is concerned. You get the feeling she’s maybe not very hands-on, which is fine if you have a good team around you, but she seemed to have a bunch of hacks buzzing around her most of the time. Even this, her best and most enjoyable song, smacks of indifference as it basically recycles Madonna’s “Holiday” but neglects to add anything new or interesting to the mix. Still, the power of the early Madonna sound is so strong that despite some truly lame-brained lyrics and a singer as nondescript as Simpson, “A Public Affair” ends up being something of a total pop jam. – TS


Lady Gaga - “Born This Way”
A playlist of Madonna's influences and followers wouldn't be complete without Lady Gaga, who took the theatricality, brazen sexuality and declarations of independence in Madge's late '80s - early '90s work and exploded them to monstrous proportions. Madonna's influence can be felt and heard in almost every move and sound that Gaga makes, but "Born This Way" is one of her most obvious homages. Playing like the mutated spawn of "Express Yourself," "Born This Way" ups the ante musically and lyrically, its pounding beat hitting home that Gaga's Little Monsters must express their freakiness because they came into the world with it. Many of Madonna's best moments weren't exactly subtle, but Lady Gaga displays a rare talent for turning her influence into fascinatingly garish caricatures. - Heather Phares


Listen to our editors' picks above, and keep the music playing by sharing your favorite songs by artists who inspired or followed Madonna. Spotify users can contribute by adding AllMusic Editors to your people list, and then sending your selections to our inbox. Not a Spotify user? Share your track picks on the AllMusic Facebook page or by tweeting @AllMusic with hashtag #madonnab&a.