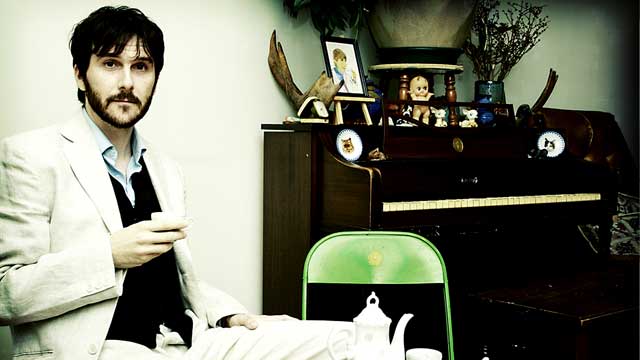 The Heavy Blinkers are back! After a string of amazingly good chamber pop albums that culminated with the breathtaking The Night and I Are Still So Young in 1994, the original group drifted away leaving only chief songwriter Jason Michael MacIsaac to carry on. He gathered up a new batch of trusted musicians, spent countless hours arranging, recording and mixing new songs, and almost a decade later, Health was finished. It’s another wonderfully baroque, melodically rich, musically dense effort that will fill the hearts of Left Banke fans with happiness. Replace Left Banke with the Beach Boys, or Cardinal, or Bee Gees and you get the picture. This is music that connects deeply, and it seemed right to ask MacIssac to share some of the things he connected with lately. Spoiler alert: Some of the answers are a little shocking!

First, a song from the new album:


Marvel Comics: The Untold Story by Sean Howe
This book is to Marvel fans what the Anthology series is to Beatles fans. Having been an avid comic fan since the age of four, this book is nothing short of a revelation to me. Nothing is more powerful than a bunch of counterculture weirdos whose time has come.

Watertownology
There was a time in my life where I foolishly believed I was one of the only people in the world who worshipped at the altar of Frank Sinatra’s pop masterpiece, Watertown. Trying to find information on this album - one of the most powerful of ALL the concept albums, in my opinion - was all but impossible. Then I found watertownology.com, and I was given a chance to learn more about this staggering work.


The Cranberry Salsa at Burrito Jax
There's a burrito place in my hometown of Halifax, Nova Scotia called Burrito Jax, and they have this mind boggling cranberry salsa that will make you weep with joy. Let’s just say if the unbearable options presented to the mother in Sophie’s Choice had been choosing between her children’s lives or cranberry salsa from Burrito Jax… well, you can see where this is going.

X Minus One
These are stories of the future; adventures in which you'll live in a million "could-be" years on a thousand "may-be worlds" X Minus One was a half-hour science fiction radio drama series broadcast from 1955 to 1958, and listening to it is pretty much how I fall asleep at night.


Playing Sequence with my parents
Chess notwithstanding, I can’t think of a better game.

Jali Jawara Musa - Yasmika
Yasmika is certainly one of my all time favorite albums. It’s the first studio album by Jali Jawara Musa (aka Dieli Moussa Diawara) and it is a staggering musical achievement by any measure. I gave my only copy to Ryan Francesconi at a Joanna Newsom concert in Montreal, in hopes that he would pass it on to her because I knew she loved kora music. I also got a $400 speeding ticket on my way to that show which I JUST paid off last week, so now I can legally drive in Montreal again.


How to tell the Birds from the Flowers and other Wood-cuts
A revised manual of ornithology for beginners, first published in 1917. I’m not sure why people keep publishing new books while this exists. I have three copies of this book in my house at the time of this writing. Just genius.

Katy Perry - Teenage Dream [The Complete Confection]
I love this record, and I maintain that Katy Perry is one the greatest pop stars since Michael Jackson. This album has Prince-level hooks and is unapologetically fun and void of cynicism and irony.

“Midnight’s Another Day” by Brian Wilson/”Jenny Wren” by Paul McCartney
Proof that getting older as an artist doesn't always mean you get more complacent. Wilson and McCartney wrote these songs in their sixties! Their talents know no bounds. These songs are timeless and some of their best.

Megan Leslie
She has been my city’s federal member of parliament since 2008. She is a living, breathing super hero and she rides around my hometown on a pedal bike with a license plate promoting kale.

Also, catch a full stream of the album on Exclaim.