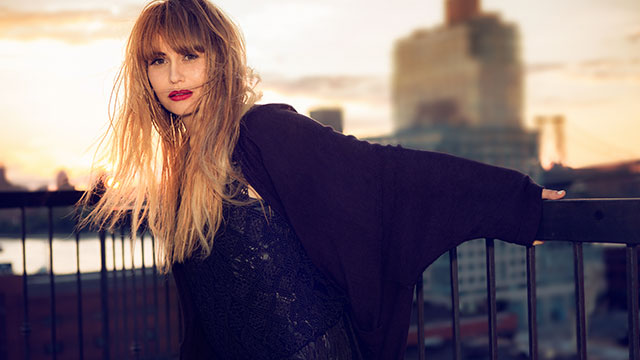 People sometimes refer to Frankie Rose as the former drummer for Dum Dum Girls and Vivian Girls. After two solo albums that make her former bands look kinda weak, and a brilliant new album out this week, Herein Wild, she should stand on her own merits for reals! Combining the noise pop and synth pop threads that ran through her first two albums, Herein Wild is a stunningly beautiful and emotionally rich album that shows just how good indie pop can be when made by someone with a vision as strong as Rose’s. The Poplist is more than happy to have her contribute a list this week. Read it, then go out and buy her album! First, this track:


The Alien movies ranked in order of awesomeness by Frankie
1. Alien
The classic story and by far the best story in the quad series. The ill-fated Nostromo lands on a desert planetoid after responding to a distress beacon. All hell breaks loose, and we watch as the entire crew is one by one taken out by face hugging parasitic aliens that lay eggs in the human body which then burst through the chest of its host. There is also an evil android named Ash on board who only makes every bad situation worse. Everyone dies except for Lt. Ellen Ripley, who puts herself into a cryonic sleep pod with her cat.


2. Aliens
The totally badass second movie of the series. Ellen Ripley is rescued after drifting for 57 years in stasis hypersleep. She is picked up by a passing military ship only to be asked to return to LV26 (the planet from Alien where all the bad alien shit went down 57 years prior.) They want Ripley to help investigate why they had lost contact with a colony that had settled there. At first she's not into it, but then she accepts the mission knowing it's the only way to get her old job back. She is told she'll be on the mission solely as a consultant and that military space marines will be there to protect her. Of course it’s a complete shit show and everyone dies except Ripley, this dude Hicks (who also played John Conner in the first Terminator) and this little girl she finds named Newt. They survive with help of a kindly android named Bishop.


3. Prometheus
I know some people will have a hard time with this ranking. This movie is so cool; it totally stayed true to the tradition of the first two Alien movies and even sprouted all kinds of theories about the origins of the face hugging chest bursting alien xenomorph species. The only bummer is that there is no Lt. Ripley, but it's actually a prequel so she wasn't even born yet. Over all, I think the characters are solid, and there's even a semi-evil, but sometimes good android, David.


4.Alien Resurrection
Two hundred years after the whole prison mishap in Alien 3, some military scientists on the ship Auriga decide it's a good idea to clone Lt. Ripley from some blood samples taken from before she jumped into the fiery inferno. They extract the embryo of the Alien queen that had been growing inside her at the time, raise it (bad idea) and once again, all hell breaks loose. The Ripley clone is kept alive and as a result of her DNA being mixed with the Alien's during the cloning process, she develops super strength and acid blood (basically, she becomes part alien). This movie is awesome because it was directed by one of my favorites, Jean Pierre Junet, who also made The City of Lost Children and a bunch of other rad movies. Oh, there's also a very helpful lady android in this movie, played by Winona Ryder.


5. Alien 3
An escape pod containing Ellen Ripley along with Newt, Hicks, and the android Bishop, all in cryonic stasis, crash land on a penal colony planet (basically a space prison). Unknowingly an alien smuggled itself into the escape pod with Ripley, which then gets into the population and goes to town killing pretty much everyone. Toward the middle of the movie, Ripley realizes she has a queen embryo growing in her chest, so she offs herself by jumping into a fiery inferno of molten metal. Pretty alright, although obviously not my favorite in the series.


Side note: Alien vs. Predator doesn’t make the list anywhere. That movie sucked and I don't recognize it as being a part of the franchise at all. Hoping for a Prometheus 2 soon.