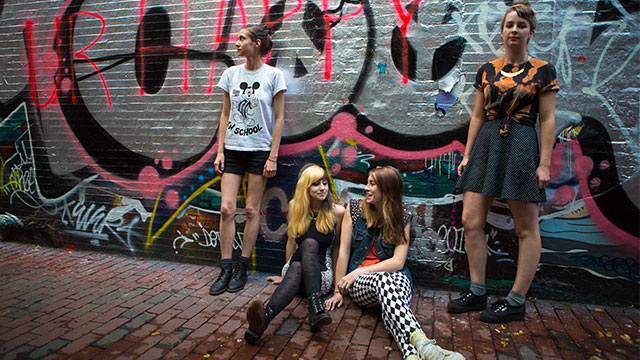 The Massachusetts quartet Potty Mouth took their name from a Bratmobile song, they get their inspiration from the riot grrrl scene of the ‘90s. Not quite as much musically (which is more SST or Homestead than Kill Rock Stars) as in other ways, such as taking no guff from anyone and maintaining a healthy DIY spirit. Their first album, Hell Bent, came out this week and it’s an impressive debut that’s full of promise, and a bunch of really good songs too.

Here’s one of them:


A Week in the Life of Potty Mouth
Blind-Friend-Dates
Ally: Earlier this week, I got a text from an old friend, Dave, now living in Brooklyn, asking if he could put me in touch with a friend of his who had just moved from France to Amherst, Massachusetts. "Sickest girl! Just moved from Paris," he said in his text. "Her name is Maud. She's into the same things as you; you'll really like her. Can I give her your number?" I've never really blindly met up with a potential new friend before, especially not since I've been out of school, but I'm always looking for new awesome women to hang out with in the area, so I said, "Sure, why not?" A few days later, I received a text from Maud and we made plans to have drinks at my house one evening. When she arrived -- with beer, cheese and tomatoes in hand -- I immediately understood what Dave meant when he said that we were "into the same things." When I asked her what she was doing in Amherst, she told me she was pursuing a Master's degree in Gender and Comparative Literature at UMass, specifically focusing on Audre Lorde -- one of my favorite feminist writers. For the rest of the night, we had endless conversations about feminism, European squatters' movements and the invisible "her-story" of women in rock music. By the end of the night, I couldn't believe how what had started as a mostly "ambiguous-context" blind-friend-date transformed into a rich and lively exchange marked by a genuine curiosity to learn about the cultural experiences that brought one another into a place of similar consciousness. Making new friends isn't always easy to do once you become an "adult" -- especially when you're already juggling most of your hours between work commitments and band commitments. I am so grateful that Dave knew to put me in touch with Maud and that I opened myself up to the opportunity of getting to know her. You can never have too many awesome women in your life.

Living with kittens
Ally: For the past two and a half months, my housemate, a seasoned veterinary hospital assistant, has been fostering four kittens. The kittens were found just a day after they were born at a construction site with concrete dust in their noses, and one even with maggot eggs in its mouth. My housemate is a true hero. She saved their lives, bottle-feeding them since the day they were surrendered to her, teaching them how to go to the bathroom themselves and nearly never leaving their sight for more than a couple hours at a time during the first month of their lives. After living in the same house as these kittens, my housemates and I decided that we couldn't say goodbye. We knew adopting all four was a bit unrealistic, so we decided to go with two, one orange and one black, both brothers. When I got back from tour a couple of weeks ago, I was so surprised at how much they had grown in the matter of just two weeks. Now that they've entered their "toddler" phase, they're as rambunctious as ever. In effort to be a wise and responsible pet companion, I spent the earlier portion of this week kitten-proofing my bedroom. I love the idea of having the kittens sleeping with me at night, but I knew if I wanted my selfish desire for nighttime kitten cuddles to be fulfilled, I'd have to put a litter box in my room. According to my housemate, the rule of thumb for litter boxes -- especially kittens -- is one litter box per cat in the house, plus one extra. I wasn't crazy about the idea of having to clean kitty poop from a box in my room every day, but I've dealt with worse. In reality, getting the kittens to actually "sleep" with me at night is near impossible. They're hardly able to lay still for more than 30 seconds at a time and they always seem to insist on stepping right on my face and purring into my mouth. I wonder if they ever actually sleep, though I also wonder if any human could ever be lonely with such loving companions as these. The song is true: "It's hard to say no..." to kittens.


Six Flags
Abby: I don't know why, but my boyfriend and I have this weird unspoken agreement that we have to go to Six Flags once every summer. It's funny because we also only go for the water park. Getting lockers and buying food there is such a money-sucker, so we came up with this system of rolling up food into our towels and stashing them under a couple of lawn chairs on the fake beach. I'll go on pretty much any water slide as long as it involves a raft, I'm way too paranoid about skinning my back on the other kinds. I never see any "punks" at Six Flags, so part of the fun in going there is getting thrown into a raft with a bunch of random, hilarious people that I would never interact with on any other day. At one point it was the two of us and this tiny, chubby kid at the front of the line for a "family size" raft, and I turn to the kid and say "we gonna do this?" and he just smiled and nodded like he already knew it would come down to the three of us. Of course I also fell asleep on the fake beach, getting a horrific, teardrop shaped sunburn from my open-backed one piece, which is just now starting to peel -- ugh.

Meteor Shower in Conway, MA
Phoebe: Last week, I was invited out to Conway to visit my friend Halie. Conway is a tiny town about 30 minutes outside of Northampton, MA. :ots of gardens and small farm houses with open fields, lots of space, lots of quiet. Lucky for us, the Perseid meteor shower happened to be in full flux. We sat around the fire pit with a bottle of wine and good friends, watching the sky. We discussed certain annals of American History (specifically the adventures of Lewis & Clark), which really made me itch for a return to elementary school. It was magical! Always jumping at the chance to get back to the woods.