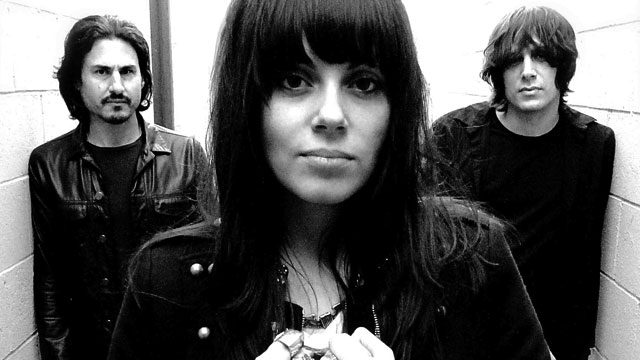 Left-wing activist rockers the Last Internationale had already been performing and recording for five years before bringing in Rage Against the Machine drummer Brad Wilk for their new album, We Will Reign, which came out last week. We caught the band's set at Lollapalooza earlier this month and chatted with vocalist Delila Paz, guitarist Edgey Pires and Wilk later in the day. Any set in which the artists use their between-song banter to call for "the release of all political prisoners," in particular jailed Native American activist Leonard Peltier, demands to have a similar amount of musical fury to accompany the rhetoric, and the band backed it up. The trio told us about the compact two-week recording process for We Will Reign, what their first rehearsal was like, and why lyrics are so important. They also shared an acoustic performance of the album's title track.

AllMusic: When you first got in a room together to make music, what was the first thing you did?

Brad Wilk: I had a bunch of guns in my room, and these guys came in and fucking started just blasting them in the fucking rehearsal room, believe that. “Oh, these are cool, great, let’s fucking go, let’s start the revolution now.” I was like, “Wait, wait, chill out. Let’s play a little bit first.” We got together and we played and the chemistry was great.

AllMusic: Can you remember what the actual first song or piece of music was?

Wilk: [gunfire sounds] I know you don't believe me, but they're crazy.

Delila Paz: I think we played some blues.

AllMusic: The new album was made pretty quickly, how much focus did that take?

Wilk: It happened in two weeks, everyone was home, having Christmas dinners and stuff, and we were isolated in the studio. There was some outside stimulation, as well, it wasn't like we were locked in the same place for two weeks. There was a lot going on, it was exciting. Not only were we making a record, we were just figuring out how we were going to be a band. We’d just met, so we were getting to know each other and make a record at the same time.

AllMusic: As a lead singer, you have a lot of energy and are very demonstrative onstage. Have you always been that way or did you have to work at it?

Paz: The stage is different than real life. I’m kind of reserved and shy, but the stage just feels like a totally different thing, it’s unexplainable. Ever since I was young, I’d push myself to do things, because I knew I was shy, like any type of musical in school, just because I wanted to get out.

AllMusic: What musicals did you do?

Paz: I think I did Runaways. I did that one and some other cheesy ones.

AllMusic: For some bands, the vocals are just a vehicle for melody, and the lyrics don't matter as much. Obviously, they matter to you a lot. Was it that way from the start?

Paz: When we first started, four or five years ago, it started very politically, Edgey had written a bunch of political folk songs, so when we started the band, that’s what we wanted to do.

Edgey Pires: For me, if I can’t relate to the lyrics, I won’t like the song, even if it’s a cool riff or great music, personally, I can’t get into it if I’m not relating to what’s being said, so the lyrics are the most important part. Everything is important, it’s the whole package.

AllMusic: Brad, is this your main commitment going forward? Other than your session work with Black Sabbath you haven't been in a full-time band since Audioslave.

Wilk: I don’t know, do you want to marry us right now? This is what I do, I play in bands, I’m not a session drummer. I did that one time, I’m a guy who plays in bands, that’s what I’m used to and what I like to do.

Pires: We pulled out the guns, he had no choice.

Wilk: Yeah, guns are impressive. When they come in blasting right off the bat before they say "hi," you’re kind of in awe. It seemed to make sense for me to do this. I don’t like to over-think it too much, I heard the music, I thought it was really cool, we got in a room, there seemed to be chemistry between us, and it just went from there. I was originally going to play two songs with them in the studio, and we kept working on stuff and it sounded really cool. And we had Brendan O’Brien recording us, and it’s like, “Let’s do another one, let’s do another one, let’s be a band.” That’s how it happened.