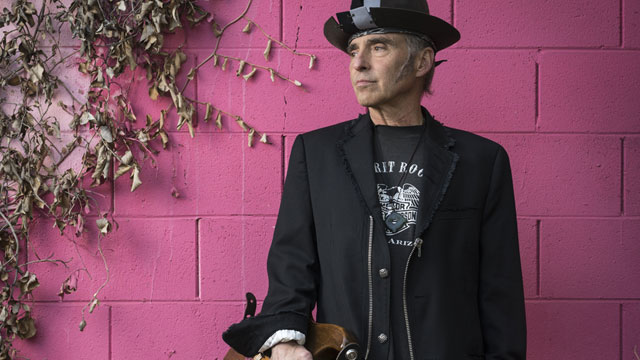 When Nils Lofgren mailed a cassette tape with 13 songs to Lou Reed in the late '70s, he wasn't sure what would come of the project. Following a wee hours writing session over the phone, over half of the songs appeared on solo albums from both musicians, with the remaining five safe in storage until the time was right. Upon Reed's death in 2013, Lofgren vowed that the songs would emerge on his next album, whenever that might be.

The subsequent years would be occupied by Lofgren's gig as Bruce Springsteen's guitarist and his recent return to Neil Young & Crazy Horse, with whom he's currently recording. But he kept his promise and put the finishing touches on the songs he'd written with Reed 40 years ago, along with six new original tracks, for Blue With Lou.

We rousted Lofgren out of bed bright and early before the day's studio session to talk about the lifespan of the songs he wrote with Reed, how producer Bob Ezrin served as their matchmaker, and a memorable night of jamming with Bob Dylan in 2003. Blue With Lou is due out on April 26.

AllMusic: Did you feel like you needed to take some time after Lou's death before you approached these unreleased songs?

Nils Lofgren: Lou used three on The Bells and I used three on Nils, and then I put out two more, getting us up to eight of the 13. I always felt Lou might call me about the others and dust them off, as some of the lyrics were more unique to Lou, and I thought he might be great to sing them at some point. But then we lost Lou Reed and I realized that they couldn’t just sit in a basement forever, and my next album, which turned out to be this one, one of the requirements was getting six of them on here: my redo of “City Lights” with the original melody, and the five no one ever heard.

AllMusic: Was it important to approach the remaining songs in a way you thought Lou would appreciate?

Lofgren: It had been such an interesting and creative and fairly painless writing session. Before I even sent him the cassette of 13 songs, I made it clear that there were titles and lyrics I didn’t like, disjointed melodies, and I was happy for him to change anything, including music, or rewrite it, add different chords, anything that he felt inspired to do. I was reading his biography by Anthony DeCurtis during the project, to keep another touchstone with Lou involved as I recorded the music. I wanted to make it my own, but I’d been influenced by his writing for so many years, it was just natural after the time we put in, and hopefully we did something he’d be proud of.

AllMusic: I feel like those books are more for nerds like me and less for people like you, who were actually there and knew the people they're about.

Lofgren: I was more of a distant fan, an admirer. I’d go see some of his shows, go back and say hello, and he was always very friendly. Bob Ezrin, the whole thing was his idea, and as someone who was producing me and had already produced Lou and maintained a friendship, it really broke the ice in a strong way.

I went to visit Lou in the studio, we talked for about 20 minutes, and he said, “Yeah, I’m open to this idea, can you meet at my apartment next week?” Then we had a three-hour football game, the Redskins and the Cowboys. Unbeknownst to me, he was a big NFL fan, so we were both excited to watch a game, sip some whiskey, and talk about it quite late into the night, while realizing that his forte was lyrics and mine was music. That led to his idea of why didn’t I just send him a cassette, and I did.

Three, four weeks went by, and it was a big surprise when he woke me up in the middle of the night and informed me that he’d been up for three days and nights, loving the cassette, and the reason for the 4:30 call was that he was excited and wanted to share that excitement. Then he asked if I wanted to take dictation, so I put on a pot of coffee, got a pad and pencil, and we spent another two hours on the phone.

AllMusic: A song like "Attitude City" feels like there's a lot you could do with it live, there's spaces where you could crack it open and go wild.

Lofgren: Usually I concentrate on making the best record I can and letting the chips fall where they may, and then at a later date I’ll re-evaluate what will work live and how it will be altered. That will be a great live track, and I have a vision for it possibly opening the show with a little more interplay between me and Kevin, that bass response he’s doing, or more of a ragtag instrumental before we kick into the theme.

Lou's version had the cynicism of using that Saturday Night Fever imagery, a bunch of big-headed ego guys, big shots, feeling too good about themselves strolling down the street and taking up the whole sidewalk. When I sang it, I was singing about the trillionaires running the world into the ground, mentally ill with the disease of power and money and not realizing we’re all in this together.

AllMusic: Lou rarely would play a song the same way twice. Was that something you admired?

Lofgren: I go both ways, I respect any musician and how they want to present their song, but I also reserve my right as a fan to my opinions. Bob Dylan does that, too. One time I went and jammed with Bob at the Hammerstein Ballroom in New York City, and I played for an hour and a half with him, we got to “It’s All Over Now, Baby Blue,” and halfway through I realized, “Oh my god, this is one of my favorite songs,” and I started yelling at the side of the stage and one of the techs came out and I said, “Give me a microphone so I can sing harmony!” But I didn’t recognize it for half of the song, even though I was playing this funky blues guitar on it.

AllMusic: You've said that part of what this album is about is trusting your instincts. Is there an example of you heeding your own advice that you can share?

Lofgren: Back in the early to mid 90s, I was writing a lot of songs for this album, Damaged Goods, and I was butting heads with the A&R person at a record company. The only game in town when I started was to get a record deal, so I had one my whole life, then I started struggling in the early 80s, no one would give me a record deal, and that was a down period for me. I was butting heads so much with this young A&R kid who was telling me my writing wasn’t up to par, he was going to tell me who to start writing with, that my producers were unacceptable.

So I jumped in a car and drove up to Philadelphia, where the headquarters were for the record company, and I demanded to one of the founding members that they fire me immediately, and that was a very unusual thing for me to do. My instincts told me, “This is not what music is about for me.” Finally when I got that release, I said, “That’s it for me, no more record companies, I’m going to have a website and make music I’m proud of,” and I feel the core of my vision is there.

AllMusic: "Remember You" is about your late dog Groucho. Neil Young also had a song about his dog on 'Harvest Moon,' and Lou's wife Laurie Anderson made a documentary about their dog. Are you drawn to dog people?

Lofgren: I think I’m drawn to animal people, it could be an elephant or a giraffe. Even as I’m up here recording with Crazy Horse, we’ll sit and look at the mountains and easily a dozen dogs will come by, stop, and they could tell we were dog-lovers. One 150-pound Newfoundland almost sat in my lap. I often joke with friends, “When are the aliens going to come and save us all?” and now I’m thinking, “They’re already here, they’re our dogs, our elephants, pay attention to them, they’re living in a way we can learn from.” I learn every day from our dog. Everybody is going through a rough time, the world is in a flux and we’ve got to pull it out of a dive to darkness.

AllMusic: There are examples throughout your catalog of you writing songs directed at people, whether it's Keith Richards ("Keith Don't Go") or Tom Petty ("Dear Heartbreaker") or your wife ("Too Blue To Play") or Lou Reed ("Blue With Lou"). Are you able to have those sorts of open dialogues face to face, or do you have to do it through song?

Lofgren: When confronted with some of my musical heroes, I’ve taken a couple of minutes to make it clear I’m gonna do the fan thing and let them know how deeply they’ve affected me or inspired me. One night I saw the original the Who and Jimi Hendrix at two different venues on the same night, and I walked out of there possessed with the idea of trying to be a rock musician, and 50 years later, here I am. We’re really hurting with some recent losses, but I have a new record I feel good about. To jump-start this whole project by dwelling in the Lou chapter and honoring that moment and getting these songs done to share...

AllMusic: There must be a sense of completion there.

Lofgren: It does feel like that, and come hell or high water, I wasn’t going to put the record out until they were ready to share.

'Blue With Lou' is available for preorder

Nathan East Recalls Recording "Would I Lie To You?" With the Eurythmics

Nathan East Recalls Recording "Would I Lie To You?" With the Eurythmics