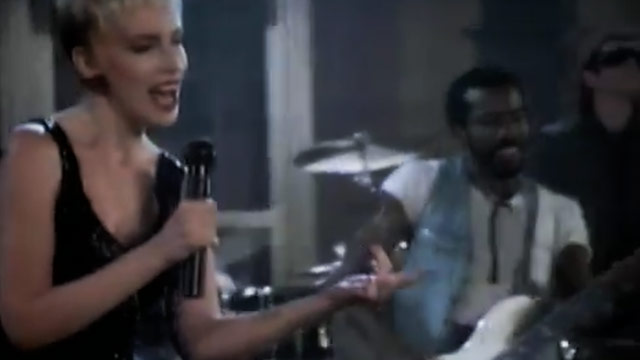 From Eric Clapton to Phil Collins to Kenny Loggins to Toto to Daft Punk to Michael Jackson, bassist Nathan East has laid down grooves with some of the biggest artists of the last 35 years. Every now and then we like to check in with him to get the story about another one of the hit songs he has appeared on, and this time it's "Would I Lie to You?" which saw the famously icy and austere Eurythmics taking a turn towards a more Motown and soul-influenced direction. East also appeared on Be Yourself Tonight's "Sisters are Doin' It for Themselves," alongside Aretha Franklin and three of the Heartbreakers.

East shared with us details about his ongoing musical relationship with Dave Stewart, how he can tell which take they used for the final recording, and the difference in playing on a song that's guaranteed to be a single.

AllMusic: "Would I Lie To You?" was a pretty transitional song for the Eurythmics. Were you initially confused when they called you to work on the track?

Nathan East: In the early eighties, I spent a little bit of time in England, and I met Dave Stewart. When he called me for their record, it was a similar feeling that I got when I was called for Daft Punk. “Oh wait, aren’t these guys, like, electronica, and synth-based?” But he was looking for more of a band sound, and then it was part of a video, as well, so he was doing what he does and reaching out and trying something new.

AllMusic: What did you know about them beforehand?

East: I was aware of them, I was a fan. She had that voice that was just that real pointed, haunting kind of sound, and very distinct. Annie Lennox has remained a great friend to this day. It was nice, because I’d never have thought I’d get a call from the Eurythmics, so it was nice to get a call to go into the studio with them, and they couldn’t have been sweeter. We played around with different ideas for basslines, and I can remember thinking, “How cool is this, I’m playing with the Eurythmics.”

AllMusic: Listening to the results now, the bass is very prominent in the mix, so that must have made you happy.

East: Yeah, and that’s funny, because sometimes you’re in there and you get the record and you can’t hear the bass, and you’re like, “Why did we go through all that trouble in the studio?” But they featured it.

AllMusic: You also played on "Sisters Are Doin' It For Themselves" on that album, with Aretha Franklin on guest vocals and the Heartbreakers as the rest of the backing band. Were you ever in the same room?

East: They were on a separate session. I was either tracking to the track already or to a synthesizer drum track, a demo, that they were adding all the parts to.

AllMusic: Is it tough playing to a scratch track?

East: When the light goes on, you have to be ready to know that every note you play, that’s it. I used to find that kind of intimidating when I was in the studio with people like Michael Jackson and Quincy Jones, you know that, “Wow, whatever I play now is going to be heard around the world,” and is going to be responsible for millions and millions of records sold. You can’t really think about it like that too much, it’s too much pressure. In the case of the Eurythmics, we were just having fun.

AllMusic: Do you have a reputation as a one-take guy?

East: We all try to get it in one, but what happens these days is you do the one, and then you do one that’s a little more conservative, where your movement is less, and one where you go crazy. So when you do multiple takes, you get different versions, and when the mixing comes, the producer is able to say, “We need a little more energy at this point,” and then they’ll go with the energetic one, or vice-versa if you need to let another instrument or vocal speak here, then you tame the part a little bit.

AllMusic: Could you tell which take they used for "Would I Lie to You?"

East: I could tell, it was the bouncy, let loose, cut loose version, which is fun, because I love being pushed in the studio.

AllMusic: Dave Stewart is a guy a lot of people seem to want to work with. What are some of the qualities that you think draw people to him?

East: His gift is that he’s kind of mild-mannered, he’s very low-key, for all the music he’s done, he’s very soft-spoken. He strikes me as a guy who has endless ideas and will try anything, a very creative guy and his approach is very open architecture, and I like that, I’ve always appreciated that about him. He’s very personable, he gets along with everybody. Once he told me that everybody he meets, he tries to spend at least 15 minutes just getting to know more about them, because they’re in his life and he feels like he should know. That could be the housekeeper in a hotel or a waiter at a restaurant, he makes the effort, which I think is pretty cool.

AllMusic: Do you respond better to that open architecture style or do you need some structure?

East: I love the freedom, and I think most people like the freedom, but they like to be guided toward the creativity. In this music business, we’re always trying to come up with something we think is special, so I think he’s been that kind of guy that could come up with it, and I’ve always been impressed that whoever he’s working with, it sounds great, it’s very accessible, and he’s got something very special when it comes to being in the studio and being able to capture some good moments.

AllMusic: You also appear in the video for the song. How quickly after the recording was that video made?

East: I think it was very close, probably within the next couple of weeks, “Hey, we’ll be shooting a video, can you make that, as well?”

AllMusic: So they knew right away that it was a single.

East: Yeah, and so that was fun, because you knew you were working on something that was going to be a single. At that time, videos were just starting to become popular on MTV and VH1, and so it was a new, fresh format. My kids were just asking me, “Daddy, when you made a video back then, where did it get shown?” because they’re used to just going on their phones and they don’t know anything else. It was nice to be part of a new technology, something that was fairly revolutionary. Then it kind of peaked, and now everything’s a video.

AllMusic: Was that the end of your professional relationship with the Eurythmics? Did you ever play live with them?

East: Dave called me when he did Mick Jagger’s record and a couple of other records that he worked on. I never got to play live with them. It was in and out, one shot, but we kept in touch. Annie invites me every time she comes to L.A., she’ll send me a text and invite me to the show, so that’s cool of her.

Dave has always been really cool about recommending me for different things, and I’ve shown up at some sessions in England or wherever and they say, “Dave Stewart said to give you a call.” Bryan Ferry said that he’d put in a good word for me, because a lot of times, with those guys, we live here, they live in London, and they ask around. It was fun because I’ve done work with Dave in London and over here, he had a beautiful studio not far from where I live, in his house, that’s where we did Mick Jagger and a few other ones.

AllMusic: By this point you'd already played on several big hits. Was it old hat when the song became successful?

East: No, because it’s never automatic. That would be the equivalent of something going viral, it’s always exciting. Still, to this day, when the kids are going to school and hear “Get Lucky,” they say, “There’s daddy again!” It’s gratifying, and it’s fun to hear. You go in there and work hard, so when you hear it and it gets to the next level, it’s pretty sweet.