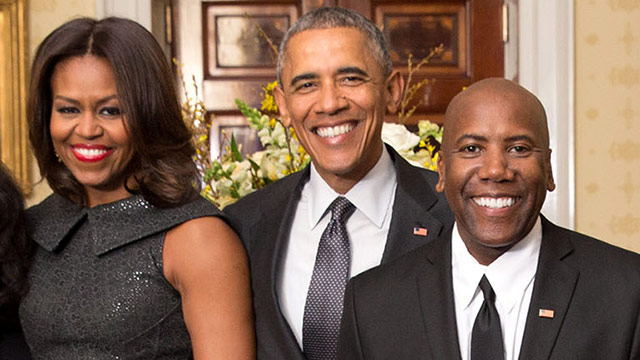 We've talked with bassist Nathan East about his performances on many big hits, including "Easy Lover," "Get Lucky," "Change the World" and "Footloose." Aside from his recording career, his tenure with artists like Eric Clapton and his esteem as one of the most in-demand session bass players has put him in many unique situations, including several performances at the White House.

His most recent appearances at 1600 Pennsylvania Avenue resulted in a pair of specials for PBS: The Gospel Tradition aired earlier this year, and featured East backing up Shirley Caesar, Darlene Love, Michelle Williams, Lyle Lovett and Aretha Franklin, and 'A Celebration of American Creativity,' which debuted Friday, January 8, and features East playing alongside Smokey Robinson, Usher, James Taylor, Queen Latifah and more.

We talked to East about the thrill of playing for the president, the time he played with a president, and the other heads of state who have heard him play.

AllMusic: How overwhelming is it to perform at the White House?

Nathan East: It's pretty exciting. Everything it takes to get in there, too, you’re constantly pulling out your ID, then you have to go through one thing at the street, one thing outside the White House, another thing inside with metal detectors and screenings, and then once you’re in there, it’s pretty exciting.

AllMusic: How was it this most recent time?

East: I’ve done two shows at the White House last year, both for PBS specials. One we recently did is for the celebration of 50 years of National Endowment for the Arts, and both of Lyndon Johnson’s daughters were there, and it was celebrating American creativity and music, so we had Smokey Robinson, James Taylor, Esperanza Spalding, Usher, Queen Latifah, lots of great singers came and sang songs. There’s the president and first lady, front row center, five, six feet away from us, enjoying a night of music, and to stand on that stage and play for them and get a wink and a thumbs up is pretty surreal.

AllMusic: How does the conversation go when someone pitches the performance to you?

East: It takes precedence, when things are vying for that particular space I try to clear out when they say, “What are you doing April 14,” or whatever the date is. It’s one of those things where they say they’re doing a special and they want me to participate. This one in particular was going to be a lot of types of music, so there was going to be jazz and pop and a bit of everything, so they specifically said that they know I’m involved in all those styles and they wanted me to make it.

AllMusic: Do you get a list of songs to brush up on beforehand?

East: What happens is even down to the last minute at rehearsal the day before, the set is being upgraded. They have a good 75, 80 percent idea of what kind of material they want to present and who to sing. For instance, Smokey Robinson sang “My Girl,” so you get a nice cross-section of music, and, at the same time, you’re able to cast these songs for different people, different American icons, like James Taylor, he brought the house down with Keb’ Mo’, so it’s a really high honor to be asked to participate in these types of shows.

AllMusic: And "My Girl" opens with the bass, so you get some shine there.

East: It sure does. It’s a cool moment and one of the most iconic bass lines in music, period. So it was a good moment.

AllMusic: Does the show itself fly by?

East: Yeah, you know it. They have the production of this down to a science, it’s in the East Room at the White House, so the day before, we go over and all our amplifiers are on the roof, out back, and they seal that off, so we check our sound and make sure everything’s working and they make sure it’s not too loud. The president’s funny, he comes in and says, “You’re having a good day when James Taylor shows up in your living room to rehearse.” It does go by very quickly, you get there and everybody’s briefed prior to going onstage, they line us up and we get to go meet the president and first lady and take photos with them.

AllMusic: What happens afterwards, do they push you out?

East: They have a little band that plays in the next room and there’s the most amazing hors d'oeuvres and desserts and food, it’s what they’ve laid out for all the guests, and everyone has a nice time. You see all the guests in there, that’s where everybody breathes a sigh of relief and celebrates the evening.

AllMusic: Which other presidents have you played for?

East: I did both of Bill Clinton’s inaugurations and I’ve done several events where I’ve met him, fundraisers at someone’s house. He’s a nice guy, we’ve played together on a couple of occasions where he got his sax out and jammed with us. So that’s Clinton, and I played at the White House with Eric Clapton during George W. Bush’s presidency, we played out in the garden.

AllMusic: When did Clinton get the sax out?

East: While he was president, he did a fundraiser at Babyface’s house one year and sure enough, he broke out the saxophone and started playing with us.

AllMusic: Have you seen the footage of Vladimir Putin singing "Blueberry Hill"?

East: No, but we did play the Kremlin once with Eric Clapton. I also got to meet Nelson Mandela and the Queen of England at the Royal Albert Hall when we played there one year.

'In Performance at the White House: A Celebration of American Creativity' aired Friday, January 8, on PBS