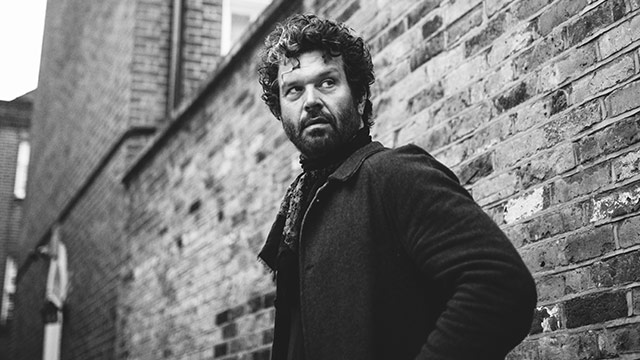 Since he strapped on a guitar at age 14, Doyle Bramhall II recognizes that he's led a charmed life in the music world. His drummer father grew up and performed in bands with Stevie Ray and Jimmie Vaughan, and by the time the younger Bramhall's talents began to show, he began playing with the best. He toured with the Fabulous Thuderbirds at 18 and released a handful of solo albums, before transitioning into a role as a producer, sideman and songwriter for much of the 2000s, playing alongside Roger Waters (handling the David Gilmour parts), Eric Clapton and Sheryl Crow, among many others.

In 2016, he returned to his own music with Rich Man, his first solo release in 15 years, and has quickly followed up that album with the four-star Shades, which finds him dueting with Norah Jones, trading leads with Clapton, and enlisting the Tedeschi Trucks Band to pay tribute to the late Gregg Allman. Bramhall spoke with us about his perfectionist streak, how he came to understand that the guitar isn't everything, and how he didn't know many Pink Floyd songs when he was hired by Waters.

AllMusic: When you put out Rich Man two years ago, you hadn't released a solo album in 15 years. Did making that record open the songwriting floodgates back up, or have you been sitting on a backlog of songs?

Doyle Bramhall II: Even in the 15 years that I stepped away from my solo career, I was constantly writing songs, almost daily. Some of them I recorded, and others I either gave to Eric Clapton or Sheryl Crow or the other people I was producing or working with. So with Rich Man, it was a record I did more for myself to experiment with breaking the ice and doing it and getting a record out, and also experimenting with my sound and my songwriting, and just seeing where I wanted to take this in the next phase of my life.

AllMusic: Is perfection something you're actively seeking?

Bramhall: I think a lot of artists, not just musicians, are generally perfectionists. I think some are able to put that aside at some point and just put it out, where others keep working on it and working on it, and sometimes go the other way with it, where it might not be as good because you’re trying to over-perfect it, and it loses the original essence.

AllMusic: Where do you fall on that spectrum?

Bramhall: I hear from other people that I’m very meticulous about what I like and what I want it to sound like. I know I tend to run people into the ground trying to get what I want. I don’t mean to, but if I have a vision for something and the things that I hear, I really don’t stop until I achieve that.

AllMusic: Are you good at communicating with other players?

Bramhall: If I take it step by step, I am. Maybe not as a whole piece, I wouldn’t be good at communicating, but if I take each step as it comes, I’m able to communicate it. When I’m in the song, I know what I want, and I’m able to get there.

AllMusic: The record is filled with distinct guitar sounds. How far along into putting a song together do you land on those?

Bramhall: I’ve been producing now for other artists and myself for quite a while, so I seem to always think in production terms. So usually if I’m writing a song, I can figure out what that particular song would be like with certain musicians and getting a specific sound for them. Usually, it’s all based on how a song is going to be emotionally, and usually that reveals itself as I’m writing it. I think that’s also why the guitar doesn’t dictate my songwriting or what I’m going to do. It used to, but it doesn’t anymore, because I think I always try and do what’s best for the song, no matter what. If the best thing for it is bassoon and not a guitar solo, then I’ll use the bassoon.

AllMusic: Was it a big moment when you realized that?

Bramhall: I think I’ve always felt like that, I just didn’t know that I could do it because of expectations of other people, because I established myself in the beginning as a guitar player. But when it comes to production and writing songs, I always feel like the song should come first. I never think about the guitar until I want to express something on the guitar in the song.

AllMusic: I think of you as a guitarist, a songwriter and a singer. Did those three things come in any particular order?

Bramhall: It all happened pretty quickly for me once it started. I grew up in a musical family, my father and stepbrothers were musicians, and I grew up around Stevie Ray Vaughan and Jimmie Vaughan. I actually became a guitar player by default, because everybody else in my family were drummers. I started guitar 14, and by the time I was 15, I was playing in three or four different bands. A year later I started writing, which was interesting for me, because I didn’t write the same kind of stuff that I’d grown up playing. I really grew up playing blues music, and I’d studied blues, that was all I loved when I was a kid, but when I started to write, all these other kinds of things would come out. It’s almost like I started hearing songs and writing songs that were like my side B of Abbey Road, where one song connects to the next and it keeps going, like movements of songs.

Then by default, I became a singer, because nobody else was into my style of music, so while everybody else was listening to Duran Duran and Oingo Boingo and a lot of 80s new wave stuff, I was listening to Bobby Bland, Lightnin' Hopkins, Albert King and John Lee Hooker. As soon as I opened my mouth and started singing, I had a voice that sounded much older than I was.

AllMusic: "Going Going Gone" is a standout, and closes the record. How did you decide that it should take that slot?

Bramhall: That was something I did at the very end of recording the record. I had been asked to do a tribute concert at Irving Plaza in New York for Gregg Allman. The first set was playing the entire album that Gregg made right before he passed away, and the second set would be the Allman Brothers Fillmore show. So I was asked to do that song in the first set, and when I did it, it just felt so good, it felt like such a powerful tribute when I played it that immediately after I got offstage I was thinking to myself that it would be even a sweeter tribute to ask Derek Trucks and Susan Tedeschi, who are my best friends, to play with the Tedeschi Trucks Band as a tribute to Gregg for the record.

That was the first song I picked for the sequence when I was sequencing the record. I said, “Well, I’m going to work backwards, because I know that should be the last song.” Everything about it, the sentiment, the way it crescendos, it couldn’t be more perfect than ending on that note.

AllMusic: When you started playing around established musicians, how long did it take for them to accept you?

Bramhall: I feel like I was already accepted from the beginning. I grew up with my dad, and he supported me doing music, he didn’t push me to do it, but he could see that I innately knew my way around. The first time he took me to a studio, I felt like I’d come home, and that was at 15. I loved recording so much, every part of the process, I was like, “This is killer.”

I’ve had a really charmed life and a charmed career. There have been so many different people who took me under their wing and put my name out there and championed me. My dad did that when I was young, and I was really close to Stevie Vaughan, too. He would talk about me in interviews and fly me to places to see him play and to sit in with him. He made the call to Jimmie when he was looking for a second guitar player, he said -- I was either Baby Doyle or Little Doyle back then -- “You should hire Little Doyle, he’s gotten really good, I think he can do the parts,” and I spent two and a half years on the road with the Thunderbirds. Then Eric, being in proximity to him and being his close friend and his collaborator for all these years, I’ve gained so much knowledge of myself through working with him and being close to him.

AllMusic: When you want to get Eric Clapton on your record, is that just one phone call or is there red tape to deal with?

Bramhall: No, that’s just me calling him up. When I recorded that song, after I heard it back I was thinking how much Eric would like it. It’s influenced by a lot of the same influences that he had, and I wondered if he’d play on it. I called him up and he said, “Hey, if you can make it to Ohio, I’m in the studio right now and I’ll play on it.” So I booked a flight, flew there, rented a car, drove up, got out of the car, took the hard drive in, and he plugged in and played for an hour. He told me that as payment for playing on my record that I had to play on his record, so he got me on a track of his.

AllMusic: You first came to my attention when you were playing lead guitar for Roger Waters on tour, which is a job that almost entirely calls for duplicating specific parts in a precise way. As a player, what did you get out of that era of your career?

Bramhall: It was all new to me, because when I got the gig, I had only heard Pink Floyd on the radio. It wasn’t until I joined the band and learned the songs and got deep into that catalog that I started to really appreciate their music and all they accomplished. I also saw a different side of music than I had grown up in. I had always just got up onstage and played what I wanted or what I felt, so it was an interesting thing to be a part of something where I actually had real parts, and I stuck to them. It was almost like being in a play, where everybody has their specific time to step out and do their thing and then step back into the darkness. It was incredible to see, because I’d never seen anything like it, or been part of anything like that, that had that kind of message behind the songs, everything had an importance to it.

AllMusic: Has that music stuck with you?

Bramhall: A few years after I was in the band, I went to the L.A. Coliseum show for The Wall. Sonically, it blew my mind, as well as visually. I haven’t seen many people that can take over an entire audience like that and be that captivating and commanding and really bring you into his story and his life the way that he does. He really brings everyone into his world, and it’s pretty incredible.